Hornets reach final score of 192.625 in three-way meet against UC Davis and Cal 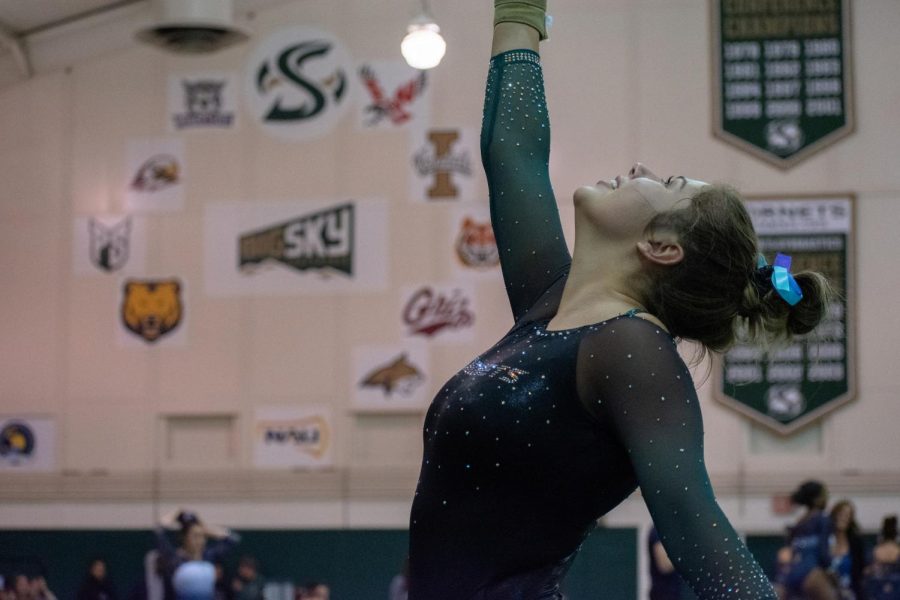 Sac State senior gymnast Carly Pratt recorded a 9.775 on beam and a 9.700 on floor on senior night on March 1. Pratt celebrated senior night with Lauren Schmeiss and Jackie Sampson.

The Hornets will have a chance to face UC Berkeley again on March 17 and they will finish their season by traveling to Seattle on March 23 for the Mountain Pacific Sports Federation championships.

After three members of the team suffered injuries while away at Seattle Pacific on Feb. 22, including freshman Shaye Mathias, the Hornets were able to beat their seasonal high with a final team score of 192.625 on Friday.

Senior Jackie Sampson continued to set career bests in her second week back and placed second on the beam with 9.875. Last week Sampson finished first on bars and beam, securing the team a lead in its first two rotations that was eventually lost due to injuries.

Junior Alexis Belkoff, tied for third place on the vault with 9.825.

Sophomore Jordyn Brent also placed with a career high of 9.900 on bars, where she led the event until Cal’s Emi Watterson beat her score by .5, earning Brent second place.

Head Coach Randy Solario says that despite everything, the team has come back from last week’s injuries “very well”. Solario says the team “definitely [could have improved] on uneven bars”.

“We had four great routines today, and two big falls,” Solario said. “That put us down quite a bit.”

Brent, who placed second on bars, said she is glad to be an all-around competitor this season, but thinks there is still room for improvement in her performance.

“So far I’m pretty proud of myself,” Brent said. “Last year I was only doing like, two or three events, and this year I’m an all-arounder.”

Brent said that she hopes to qualify for regionals by the end of the season, and that she plans to strengthen her performances on the beam.

“My strength is definitely bars, it’s always been my best event,” Brent said. “My weakness is probably beam.”

The meet on March 1 was also senior night and Sampson was given a flower bouquet along with fellow seniors Pratt and Schmiess after the meet.

“It’s really nice to be back and finally have my senior season,” Sampon said. “It’s unreal to be doing so well, and I’m sad that it’s coming to an end so quickly.”

The team has two more meets before traveling to Seattle on March 23 for the Mountain Pacific Sports Federation championships.

“I want everyone to hit four-for-four on their routines,” Solario said. “If we do that, we’ll have a great end to our season.”