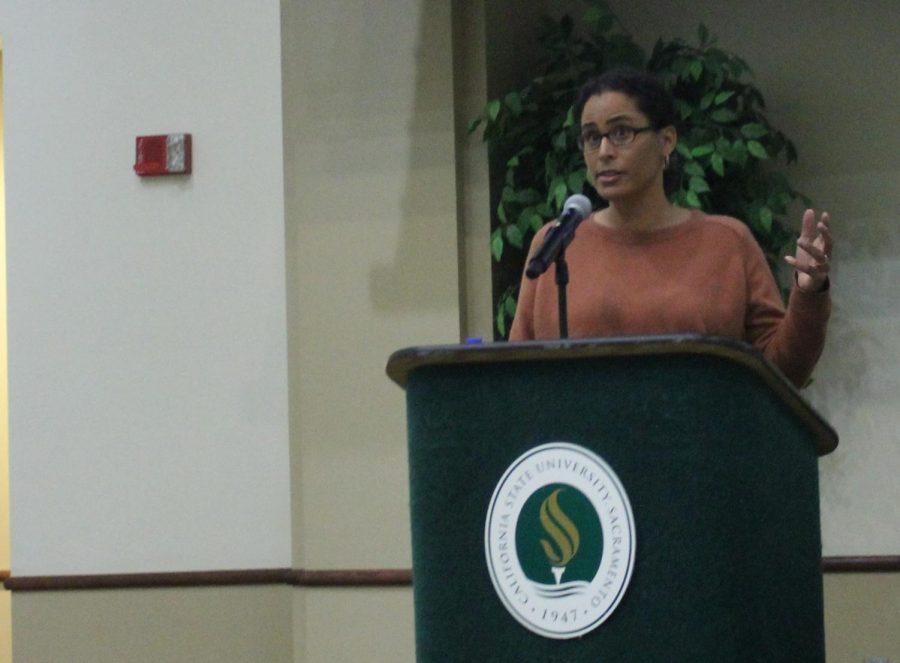 UCLA Professor Kelly Lytle Hernández lectures at Sac State Thursday. Hernández spoke about the history and costs of mass incarceration in Los Angeles, and her digital mapping project of the fiscal costs throughout the area.

Researcher Kelly Lytle Hernández shared her research of the history and cost of mass incarceration in Los Angeles, California with Sacramento State students Thursday evening in the University Union ballroom.

Hernandez said she sees mass incarceration “mass elimination,” and that that makes her want to “fight” and is why she started Million Dollar Hoods @TheStateHornet

Hernández is a professor of history and African-American studies at UCLA and the director the Million Dollar Hoods research project that created a digital map of the costs of mass incarceration for each geographic region in Los Angeles.

While writing her latest book, “City of Inmates: Conquest, Rebellion, and the Rise of Human Caging in Los Angeles,” Hernández said she realized that “mass incarceration is mass elimination,” an institutional tactic to make people of color disappear.

“There’s everything I read in the book. For her to point it out and talk about it out loud opened up and expanded my knowledge that much more,” Corona said.

Hernández said prior to the event, “I hope that [the attendees] understand and learn the stakes of the movement and that it is a major question, an unresolved question of mass incarceration within the United States.”

That unresolved question drove Hernández to establish Million Dollar Hoods, staffed almost entirely by researchers of color, some of whom were previously incarcerated, she said.

Hernández said Los Angeles is an ideal case study for examining the diversity of “ways we cage human beings,” in jails, prisons, and immigrant detention centers that have historically confined Native-Americans, poor white men, Asian and Mexican immigrants, and African-Americans.

But when Hernández tried to locate records of the city’s development of incarceration, she said the Los Angeles Police Department and Sheriff’s Department told her they did not preserve archives of individual arrests.

Hernández said she tracked teachers, formerly incarcerated individuals, local activists and others she discovered kept tremendous record of arrests made in their communities, which she named “the rebel archive.”

This archive, according to Hernández, unearthed a history of criminalizing the landlessness of Native-Americans through public order charges of vagrancy, the invention of “unauthorized entry into the U.S.” as a crime to stanch Mexican immigration, and police brutality toward black communities.

The purpose of imprisonment was “racial control,” Hernández said.

Hernández said the American Civil Liberties Union eventually sued the LAPD for not complying with the Public Records Act, and archives of arrest details through LA’s history became available to the public.

Hernández’ presentation emphasized the costs of mass incarceration, from maintaining prisons to fines, fees and bail bonds that can rack up into thousands of dollars per arrest.

Hernández said she advocates for “justice reinvestment,” proposing the millions of dollars spent keeping mostly men of color incarcerated for mainly drug possession and DUI charges should be spent on substance abuse services, schools, housing and employment growth instead.

“We need support services not cages” said Hernandez, asking that money put into prison should instead be put into social [email protected]

Hernández’ visit concluded with a question and answer session with the audience.

Paula Torres said she attended the lecture for her Mexican-American history class and found it inspiring.

“The fact that brown and black communities come together to gather up data against the law enforcement is really, really cool,” Torres said.