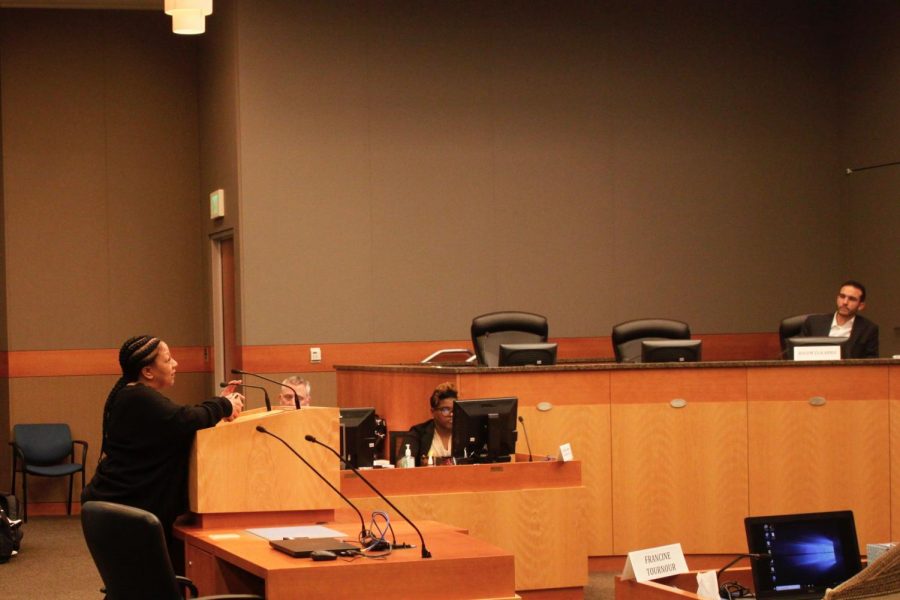 Tanya Faison speaks to the Community Police Review Commission on her concerns regarding Sac PD. Faison noted the lack of consequences for police officers who use deadly force

Those who spoke at the meeting included California Assembly members Shirley Weber and Kevin McCarty, coauthors of Assembly Bill 392.

The motion to recommend “that Mayor and Council support AB 392 as a best practice for police policy and procedure” has passed, amended to recommend Sacramento instate the policy immediate

The motion presented to the commission would send a recommendation to Sacramento Mayor Darrell Steinberg and city council to support AB 392.

“For nearly a century and a half, Californians have witnessed the justification of police homicides due to a standard that says it can be reasonable to use deadly force even if there are other alternatives,” Weber said.

The motion to recommend “that Mayor and Council support AB 392 as a best practice for police policy and procedure” has passed, amended to recommend Sacramento instate the policy immediate

McCarty, a former member of the commission, said that the bill is about preventing unnecessary deaths.

The motion for AB 392 passed, along with an amendment recommended by commission member Richard Falcon to change police use of deadly force laws in Sacramento immediately.

The agenda set for the meeting also included the creation of an advisory committee that meets with the Sacramento Police Department.

Mario Guerrero, a commission member who heads the Use of Force Ad Hoc Committee, noted that he wishes to look into use of force against peaceful protests.

Tanya Faison, the founder of the Sacramento chapter of Black Lives Matter, said to the committee, “I didn’t plan on speaking — I just have a checklist of things to bring to your attention and kind of put in your ear.”

Her list included the lack of consequences for police officers involved in deadly force in policies passed over the last year. This includes the less lethal forms of force policy, the body cam policy and the foot pursuit policy.

“Whatever you guys do moving forward, try to advocate for repercussions and consequences in the policies, because that’s gonna be the only thing that stops them from killing us,” Faison said.

The committee, which began in January, will meet again on April 8 at  6 p.m. in the Council Chambers of City Hall, 915 I. St.