Beyond the Barricade: Weighing social issues with fandom

Kings, Arena staff beef up security in wake of protests 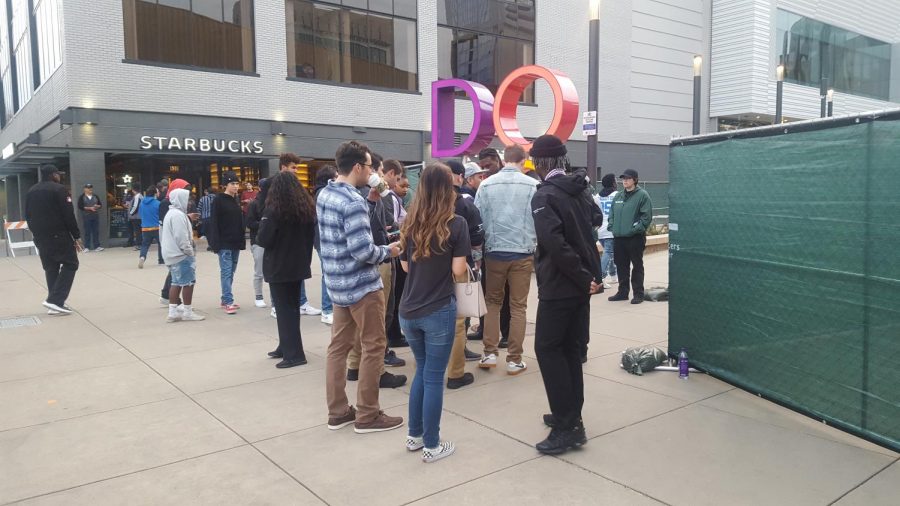 Fans wait at the temporarily barricaded entrance of the Downtown Commons prior to the Sacramento Kings versus New York Knicks game Monday. The Kings released a statement earlier in the day that only ticketed fans would be allowed beyond the barricade in order to ensure entry into the arena.

Reaction to the decision on Saturday to not charge the two police officers who shot Stephon Clark weighed heavily on fans and arena-goers attending Monday’s Sacramento Kings and New York Knicks game.

After two games last season where protestors blocked arena entrances — both of which included ticketed fans being denied entry — the Golden 1 Center and the Kings increased security surrounding Downtown Commons Monday, closing the plaza in the early afternoon prior to the arena doors opening and setting up barricades at street entrances while only allowing ticketed fans to enter.

Both Abraham and Raoul spoke to the differences between last night’s game and the protests that occurred at the two games last season.

“It feels weird having the area closed off, but I understand why they closed it off,” Abraham said.

RELATED: Protest over Stephon Clark shooting closes Golden 1 Center for the second time in a week

Raoul said he had tickets to both games last season that included protests, being denied entry the first time and maneuvering through the second time, before gaining entry into the arena.

“The first one I was not (allowed in),” Raoul said. “It was what it was, but I understood it.”

Raoul said he was upset at the verdict and fully supports the protesters right to gather and voice themselves.

“It was difficult as a fan (to be denied entry), but especially as an African-American I understood,” Raoul said. “My heart goes out to the family.”

Raoul said he was slightly disappointed at the second interruption last season only because Clark’s brother Stevante had publicly stated prior to that game to not block the arena entrance.

Kings owner Vivek Ranadive took time after the first game to speak to fans in attendance, voicing his sympathy and support for the Clark family as well as the public’s right to protest.

Ryan Peer, a freelance photographer, stood across the street from one of the barricaded entrances hoping to document some the action in the area.

While he was in the area to capture a few photos, Peer felt strongly about the situation at large and what it means to minorities as a whole.

“When you’re not white and a cops stops you there is a sense that anything can go wrong at any moment, because you are not caucasian,” Peer said.

Peer believes the reaction in Sacramento has been very similar to other cities around the country where similar situations have occurred and that the ultimate end goal is the same.

“We know (law enforcement) protect us, but sometimes they cross that line,” Peer said. “We just want balance, if they do cross that line there should be punishments … if we as citizens cross the line there are consequences.”

While no protests occurred in the area surrounding the arena before, during or after the game, security from Golden 1 Center and Downtown Commons took increased precautions to keep its patrons safe.

Raoul said he was glad extra measures were taken to allow protesting in the area without interrupting fans being able to attend the game.

“I was pleased that they took steps to allow fans to come in,” Raoul said. “It gives people an opportunity to enjoy the game as well as understand that there’s a social issue.”

Security staff outside of the arena declined requests for comment.

Nicholas Corey contributed to this report.