Average use costs between $2-4 per ride 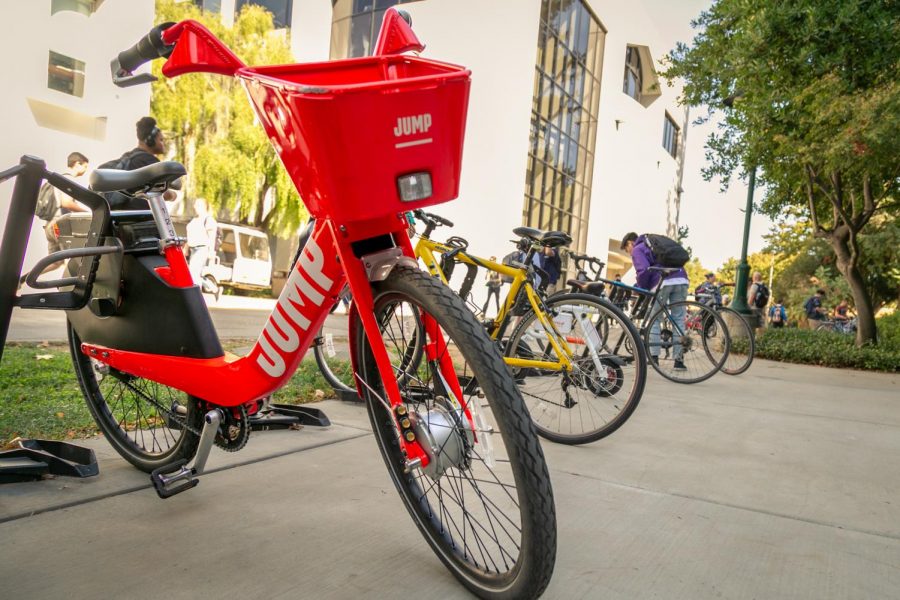 A bicycle from the company JUMP Bike sits in at a bike rack between Del Norte and Mendocino Hall. Sac State plans on implementing special bike racks for JUMP Bikes.

The Uber-owned company, JUMP, will be the first to release 100 electric scooters in downtown and West Sacramento Friday, according to Sacramento city officials.

E-scooter users will be charged $1 to unlock a scooter and 15 cents per minute until they complete their ride – the average cost ranging between $2 and $4.

Riders can use the Uber app to locate and scan a JUMP scooter to begin riding. E-scooters can travel up to 15 miles per hour and are required to be ridden in the streets by Sacramento law.

A tweet from Sac PD explained the restrictions on JUMP bikes and Scooters.

The Sacramento Police Department is committed to making sure that people in our City stay safe while traveling on electric bicycles and motorized scooters. Please use this chart as a reference for applicable laws and important safety information. #sacpd #TogetherWeBuild pic.twitter.com/0ZiI6MS1aJ

Sacramento State psychology student Karen Ramos expressed some concern with the scooters after some previous experience with them.

“It might be a little dangerous.” Ramos said. “I’m from Tahoe and we have the little scooters and they’re really fun but they go pretty fast and people have fallen off.”

JUMP will make its scooters available for rent in the same geographic zone as its bike service: Sacramento and West Sacramento. To avoid an out of zone fee of $25, users must consistently operate only in allowed boundaries.

Sac State sociology student Robert Rodriguez said that the addition of e-scooters is a natural transition for the city of Sacramento to make.

“It makes sense that would be the next evolution,” Rodriguez said. “It started with Zipcars, then bikes, then scooters, it’s the next step. I don’t know what would be next.”

Under state law, riders must return unlocked electrical scooters to a bike rack after usage. Users will also be fined if e-scooters are left in an undesignated area potentially blocking pedestrian traffic.

According to JUMP’s Sacramento manager, Alex Hagelin, renters use JUMP bikes to travel distances of three miles or more, compared to scooter users who typically rent for a shorter

“By expanding the multimodal transit options in Sacramento — first with rideshare, then with e-bikes, and now with scooters —we’re helping to reduce the impact of carbon emissions while making it easier for residents there to live without a car,” said Hagelin in a news release.

Additional reporting by Will Coburn.