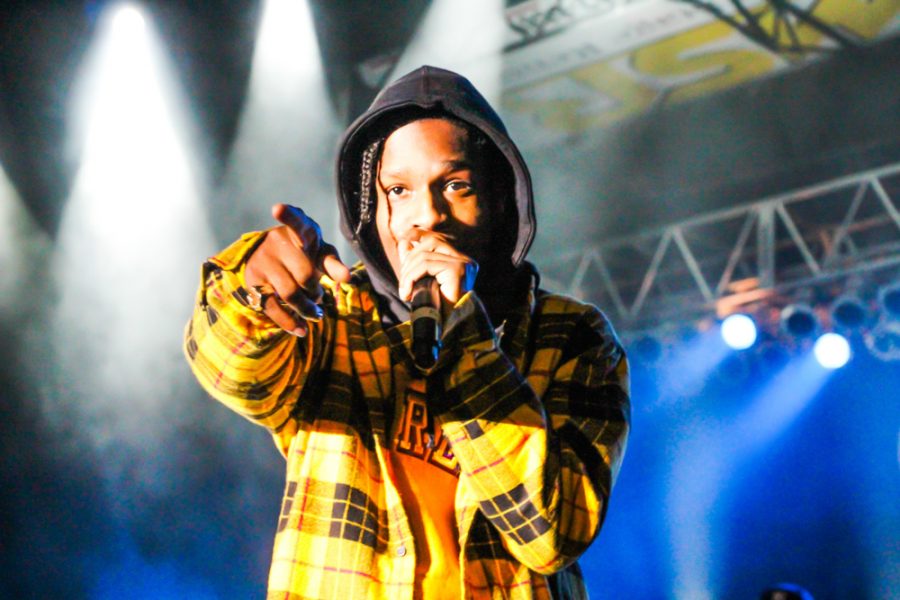 Rapper A$AP Rocky held a well-produced and dynamic performance as part of his 'Injured Generation' tour at the Golden 1 Center in Downtown Sacramento on Feb. 1.

Returning from his three-year hiatus, Rakim Mayers, better known as A$AP Rocky, owned the Golden 1 Center in Downtown Sacramento with an explosive and energetic performance.

The show — part of his “Injured Generation” tour — induced psychedelia and awe throughout the audience with bright colors, kaleidoscope patterns and colorful imagery.

Rocky introduced the show in an original, innovative way as he suddenly appeared on center stage wearing a vibrant vest, track pants with flame designs and a mask that resembled that of a crash test dummy.

The stage aesthetics, such as props and images used while performing, were the most captivating, especially as Rocky was hoisted onto a car used for crash dummies and ascended into the air, where he rapped the lyrics to his song “Tony Tone.” It was an inspiring act of confidence and courage — an artistic statement of success.

Each song was filled with deep bass and high energy, forcing audience members’ heads to bob in rhythm to the music and jump up and down.

He performed new music as well as his old, which I thoroughly enjoyed.

Songs like “F****n Problems”, “Lord Pretty Flacko Jodye” and “Yamborghini High” filled me with nostalgia and fond memories of high school when he first stepped into the music scene.

Is it really an A$AP Rocky concert if there is no remembrance of A$AP Yams?

Rocky stopped the show to have a moment of silence for his best friend, former A$AP member and founder, A$AP Yams, who died from a drug overdose in 2015.

The music and stage backdrops worked together to evoke a feeling of experimentation, something I believe Rocky was eliciting when he dropped his recent album “TESTING”.

Although I appreciate Rocky’s concern for his fans, I was not sure what he expected when he stopped performing mid-show to bring attention to two fans who were brawling in the crowd.

The two brawlers were caught in a mosh pit. Those who participate in mosh pits are usually expected to come out with a bloody nose, broken bone or wound caused by somebody else.

He forced them to make up and then let them rock out on stage for a bit. He did this two times. I know it is a noble deed, but there was no reason to stop the show twice so these two could fake their resolution. It was time wasted.

Overall, Rocky is a music dynamo. His songs can induce both ambiance or rowdiness.

One of the more intimate moments of the show, which I found myself recalling after it was over, was his performance of the song “L$D.” The stage drops displayed smoky blue and purple colors with the camera focused on Rocky as he laid center stage.

The visuals and stage production brought the concert full circle. From his performance at Tyler the Creator’s Camp Flog Gnaw music festival, which I attended in 2017, to now, production was a huge improvement.

At Camp Flog Gnaw, there was not nearly as much thought into stage design or heart in his performance due to the venues small size. He was sluggish and lighthearted.

This time, however, Rocky proved to be more than an artist on Friday night. He proved that he is a thoughtful and talented performer, one who can deliver a quality show.