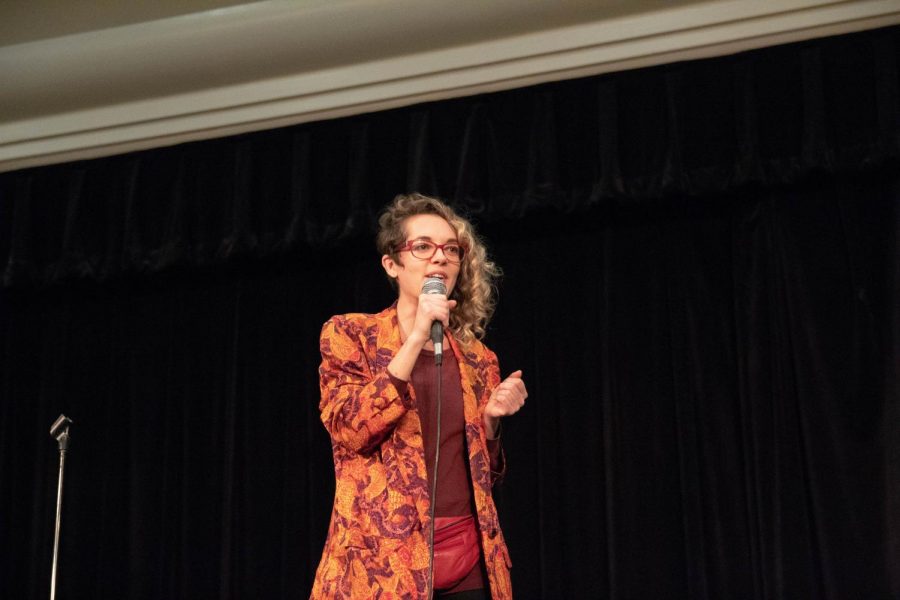 Comedian and Sac State alumna, Shahera Hyatt, was the second act in the comedy show put together by UNIQUE Programs in the University Union Ballroom on Thursday.

Kober was the main act of the comedy night put on by UNIQUE Programs. The actress and comedian has appeared on sitcoms such as “The Middle” and “The Real Husbands of Hollywood,” starring Kevin Hart on BET.

Before the show began, the ballroom was fairly empty, but ten minutes prior to the start of the show, students slowly began filling the first few rows of seating.

“We expected about 200 to 300 people to attend,” said Ajamu Lumumba, event coordinator for UNIQUE Programs. “Since it is the first week back from break, and a holiday on top of that, it can be difficult to get students to attend the events.”

Amber Sanchez, a second-year student and psychology major attended the event not knowing what to expect from the comedians.

“I’m not too sure what to expect honestly. I’m sort of new to stand-up comedy,” Sanchez said.

Sanchez was not the only one; first-year student and business major Brianna Lo shared the same thought.

“I do not expect to leave tonight laughing in tears, but it should be a good time,” Lo said. “I expect a good laugh.”

Lewis, a local comedian, was the first to take the stage. She opened with jokes about farts that make birds fall out of the sky, her pet dog eating edibles and Drake singing about a hotline for donuts at Krispy Kreme Doughnuts.

Hyatt was the second act, making fun of relationships, conspiracy theorists and sharing her honest, yet hilarious coming out story.

Hyatt said she had returned to guest speak at Sac State but never to do stand-up.

“Now that I am here as a comedian, I’m excited and thrilled to have this opportunity,” Hyatt said.

She accredits her time at Sac State and says it was here where she was able to develop the public speaking skills that would help her perform in front of large crowds.

Kober was the final act. She put on awkward faces, paused in between jokes and told stories of lesbian camping trips. She also informed the audience that she is not a fan of hikes that go over three miles.

Kober, like Hyatt and Lewis, told jokes about President Donald Trump all night, referring to him as a “pumpkin spice waffle.”

As the show ended and the laughs grew faint, students walked out seemingly satisfied with the performances done by the comedians.

“Out of all the performances tonight, Jen Kober was probably my favorite,” said David Salazar, a second-year student.

After the show, third-year student Terri Franklin said the show was funnier than expected.

“It was really funny, funnier than I expected actually,”  Franklin said. “I liked how they added relevant issues in their act, that made it funnier. Jen was my favorite too.”

For more can’t-miss-events, see The State Hornet’s guide to having fun on campus this semester.