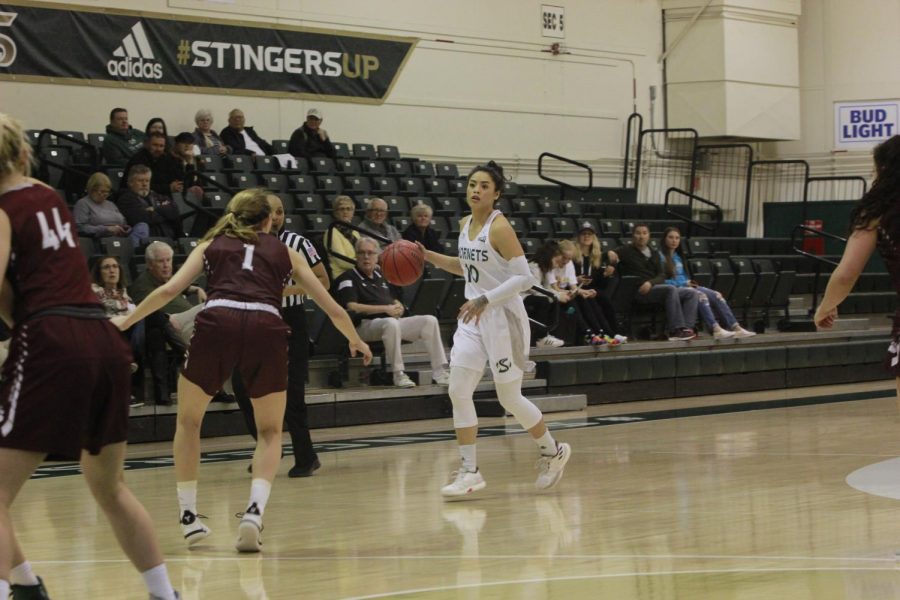 Sac State junior guard Gabi Bade waits for the play to develop in a 88-86 double-overtime loss to Montana at the Nest on Jan. 3.

The Sacramento State women’s basketball team begun the 2018-19 season with a 3-1 record ─ ranking among the best in the nation in certain team and individual statistics.

The solid start by the Hornets (4-7, 0-3 Big Sky) is now a distant memory as the team has now lost six of their last seven games.

Unlike at the beginning of the season, the Hornets have gone away from playing “Bunky Ball” with group substitutions.

Through the first five games of the season, Sac State head coach Bunky Harkleroad subbed five players in and five players out about every 90 seconds to accommodate their fast-paced offense.

Harkleroad attributed the change to “personnel issues” as his team has been plagued by injury again this season.

“We’re going to do everything we can that will help us win,” Harkleroad said. “Not having enough quick, healthy bodies right now. Since Quayonna Harris has been out with a knee injury, that slowed us down a little bit and we’ve been banged up.”

“We have to play defense with five people instead of three,” Harkleroad said. “We don’t have five people all the time that are willing to guard and commit defensively. It’s just a weak defensive effort.”

Sac State last played at home Dec. 7 against the University of California, Davis. The Aggies dominated the Hornets winning by nearly 50 points, 109-60.

The Hornets then had 12 days off before their next game in Albuquerque, New Mexico, playing in the Lobo Invitational at The Pit against the New Mexico Lobos (9-1) and the Hampton Pirates (4-5).

Sac State lost their first game against the Lobos 85-53. Junior guard Hannah Friend led her team in scoring with 14 points.

“We got to play a very good basketball team in New Mexico,” Harkleroad said. “The Pit is one of the most historic sports venues in America.”

The next day, Sac State got a narrow 65-61 win over mid-major school, Hampton. Friend led in scoring again with 25 points and 7 rebounds. Junior forward Kennedy Nicholas led her team in rebounding with 12 boards while adding 8 points.

After celebrating Christmas, the Hornets went to Greeley, Colorado Dec. 29 to take on the Northern Colorado Bears (5-4) for their first Big Sky Conference matchup of the season.

Sac State failed to score a single point in the first quarter and trailed 33-0 after one period. The Hornets combined to shoot 0-18 from the field and 0-8 from the three point line.

“The game against Northern Colorado was tough,” Harkleroad said. “We had a brutal first quarter, [I’ve] never been a part of anything like that. We played three pretty nice periods after that and we came out of that [game] a better team.”

The Hornets returned home to the Nest for the first time in nearly a month Jan. 3 to take on the Montana Grizzlies (7-4, 2-0 Big Sky). Sac State and Montana played a back-and-forth contest which came down to the final play of regulation.

With nine seconds left in regulation, the Hornets trailed by three points. Following a pass from junior guard Gabi Bade, freshman guard Sarah Abney sent the game to overtime with a banked-in three pointer in traffic as the buzzer sounded.

Freshman guard @sarahabney33 banks in a three pointer to send the game to overtime. @SacStateWBB and Montana are tied at 68 as we head to the extra period. This is the Hornets first game of the season to go to OT.

The Hornets and Grizzlies remained tied at 78 after the first overtime to send the game to double-overtime. This was Sac State’s first double-overtime game in six years and the fourth in school history.

The Grizzlies ultimately won the game 88-86 in a hard-fought Big Sky Conference matchup.

[email protected] were led in scoring by @g_baaade who had 26 points on 10-19 shooting (6-10 from 3) in today’s game. She got the start in her first game at the Nest after transferring from the University of Buffalo. pic.twitter.com/cEcHJZaJEX

“We just made a few early mistakes which transitioned into the final few minutes of the game,” Friend said. “It’s no one’s fault but [ours] as a collective whole we made a few mistakes that we couldn’t come back from so it’s just knowing what we need to do next time being on the same page and disciplined.”

Sac State had another opportunity to get their first Big Sky Conference win Jan. 5 against the Montana State Bobcats (7-6, 2-1 Big Sky).

The Hornets came out aggressive in the first quarter, outscoring the Bobcats 18-16. Sac State led by three going into halftime 32-29. That all changed in the second half as Montana State came out of the locker room on a tear.

In the second half, the Bobcats outscored the Hornets 40-21, ultimately winning the game 69-53.

“[It was a] very frustrating day for us,” Harkleroad said. “Montana State did a very good job in the second half knocking down shots and picking our zone apart. We played a couple different defenses and they made us pay for both. They did a great job on the glass and you have to give them credit, it was a very frustrating half.”

Junior guard Tiara Scott attributed her team’s struggles to not being able to play a “complete game.”

“We just can’t put all four quarters together,” Scott said. “We’ll have three good quarters and one of the quarters will be pretty bad. We just haven’t had a complete game yet. We just need to do a better job of realizing basketball is a game of runs.”

Despite the team’s struggles, Friend and Nicholas still rank among the best in the nation in scoring and rebounding, respectively.  Friend currently ranks 14th in scoring with 21.1 points per game. Nicholas ranks 6th in offensive rebounds per game with 4.7 and 14th in total rebounds per game, averaging 11.5.