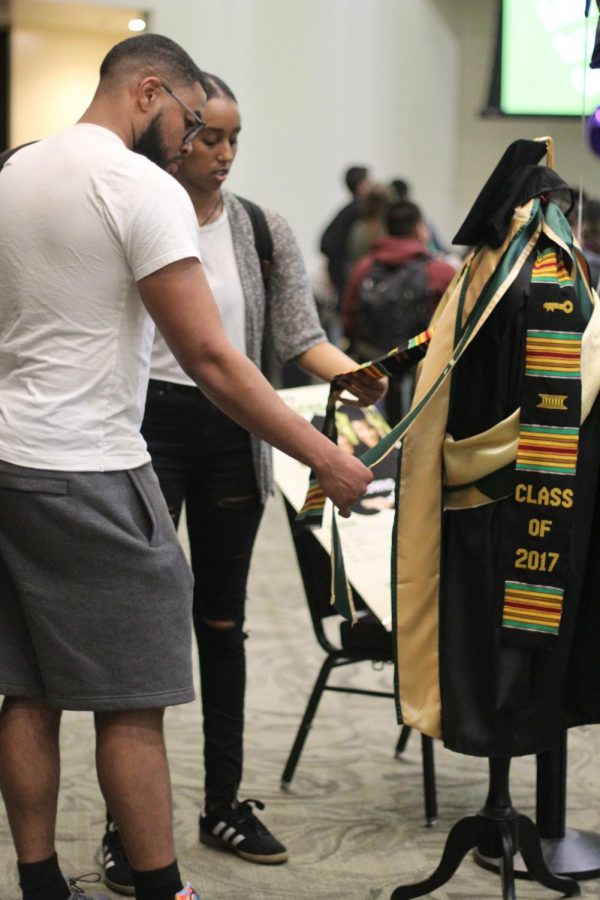 Seniors Tender Cooksie, left, and Yosan Zeweldi look at sashes to wear for graduation at Grad Fest on March 28, 2018.

Debuting in the summer of 2016, the “Finish in Four” and “Through in Two” programs were created to help incoming freshmen and transfers earn their undergraduate degrees in four years.

As an incentive for students in the programs to complete their degrees in four years, Sac State will now pay for their graduation regalia, which includes a cap, gown and tassel which normally costs around $38, according to the ASI website.

The program has received national recognition from the American Association of State Colleges and Universities for its efforts to help boost graduation rates and decrease achievement gaps.

The Graduation Initiative of 2025 was constructed to push colleges and universities to help their students graduate in a timely manner.

Sac State’s “Finish in Four” programs calls for participating students to pledge to take a minimum of 15 units each semester. In return, they receive both academic and administrative support.

According to Sac State’s official website, the results of the program have shown an increase in four-year graduation rates rising from eight percent in 2016 to 15 percent in 2018, the highest figure in 30 years.

The number of first-year students who took 15 or more units in their first semester increased from 37 percent in fall 2016 to 72 percent this year.

The goal of the program is to raise Sac State’s four-year graduation rate to 30 percent by 2025.