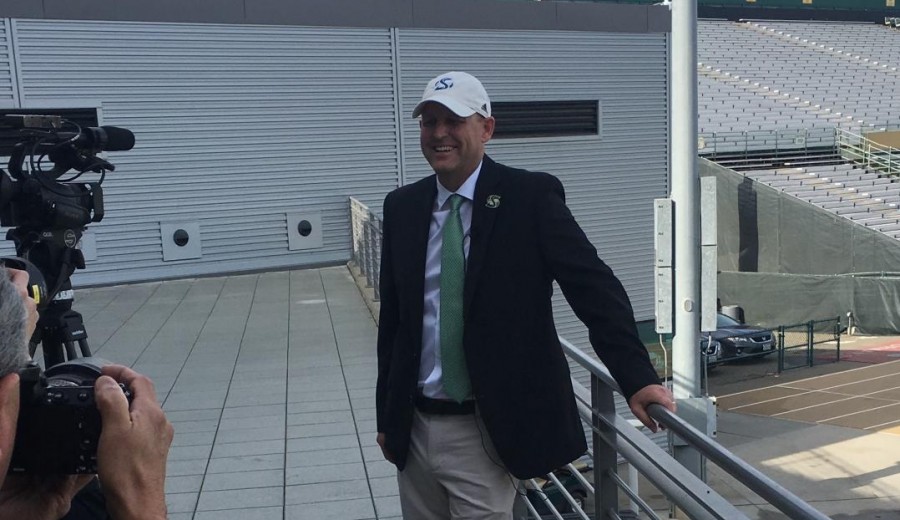 Sac State football coach Troy Taylor overlooks the football stadium he will be coaching in. Taylor was named head coach on Dec. 17, 2018 after the Hornets fired Jody Sears.

By hiring Taylor, the Hornets hired a hometown guy; one who started at quarterback for Cordova High School before playing for the University of California, Berkeley.

After a professional career with the New York Jets, he stepped into coaching. He spent 1996 to 2000 at UC Berkeley as a positions coach before coaching high school.

He was hired as head coach of the Hornets less than one month after the Hornets fired Jody Sears after a third two-win season in five years.

The State Hornet spoke with new head coach Troy Taylor about his time in high school, recruiting and what he is looking for out of his assistants.

Question: What are your memories of Hornet Stadium from your time at Folsom High School?

Q: Has recruiting high school athletes changed much since when you were recruited out of high school?

A: That was a long time ago. I think in the end it’s about relationship. I think the tools have changed. In the end, people make decisions with their heart, and what they feel and a lot of it is based on their relationship with you. In that respect, I don’t think it’s changed. Now, how you reach out to people, how you utilize social media, that’s changed dramatically. It’s always evolving so you always have to keep up.

Q: What are you looking for in your assistant coaches?

A: Jody hired some outstanding people and coaches. I wanted to give them an opportunity to show me what their vision was. The basic vision and how we attack things, that will not change. As a coach, you have to adapt and evolve to what you have around. We are going to be who we are. I have a very strong clear vision of what that looks like. The teams I’ve been involved typically play with a lot of decisiveness and confidence, not arrogance. I want to surround myself with humble people. Humble people wake up every day trying to figure out how to get better.

Q: How much recruiting have you done and what is your plan for that?

A: I think I know every high school coach in the area. That’s important. When you have relationships with coaches, they are typically more transparent and give you good information. Typically a friend is going to be real honest with you. This is going to be the lifeblood of our program. This recruiting base is larger than any recruiting base in the Big Sky, so we don’t have to go very far to find great players. We just have to be thorough in our evaluations. You’ve got to give them a reason to be here. We want to different, we want to be unique. I have a clear vision offensively of what I’m looking for specifically.

Q: Had you worked with any of the players when they were younger when you were still in the area?

Q: Had you watched Sac State football at all last season?

A: No, typically in the season you’re pretty focused in on your opponent so I really don’t see any college games.