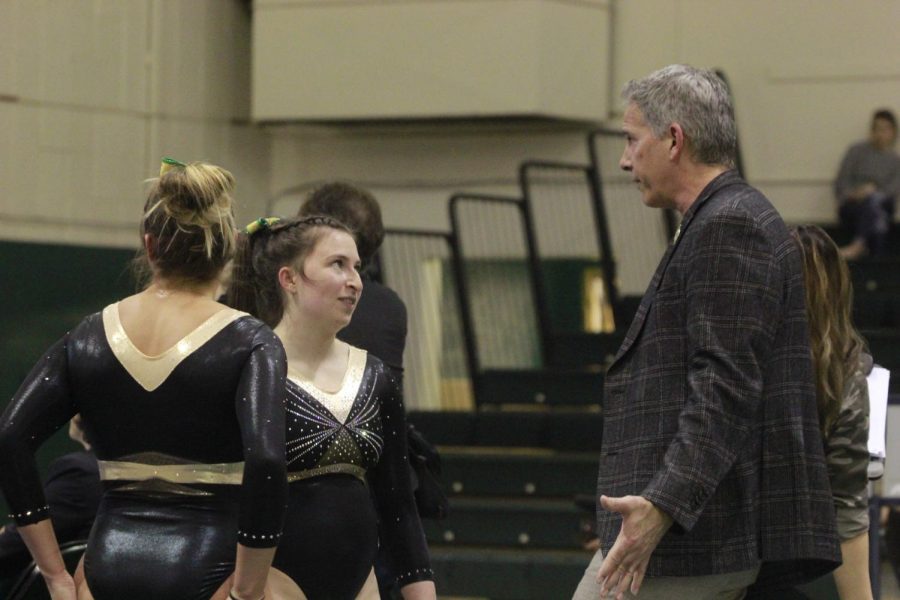 Sac State junior Alexis Belkoff speaks with head coach Randy Solorio after she performed a career high 9.800 on the event Friday night in a tri-meet at the Nest against Stanford and Seattle Pacific.

Junior Alexis Belkoff set career highs on bars and beam while nearly setting a career high on vault as the Sacramento State gymnastics team finished with a score of 189.950.

While Belkoff performed well, the rest of the Hornets struggled, finishing in second place behind Stanford and ahead of Seattle Pacific in a tri-meet at the Nest on Friday.

After losing five seniors from last year’s squad who qualified for NCAA Regionals as individuals, Sacramento State head coach Randy Solorio knew his team would have a difficult start to the season.

Aside from sophomore Jordyn Brent, none of the other five competitors on bars had extended experience on bars; junior Cydney Kone competed in the event one previous time in her career.

“I think we did what I was expecting of them, I wasn’t thinking of a miracle,” Solorio said. “We had six freshmen and six sophomore and a total of six upperclassmen. We’re just going to have to go through this type of process.”

At the halfway points in each meet, the team was on pace to finish below 188. In the opening meet, the Hornets were able to pick up their score on beam and finished with an event high 48.850, which included a 9.775 by freshman Amber Koeth and a 9.750 by Mathias.

Koeth impressed again in the second meet of the season with a near-flawless routine except for a fall which led to a half point deduction.

“It was a great beam routine,” Solorio said. “That’s a very uncharacteristic fall for you. She is usually consistent on that, and that’s why beam is what it is.”

Lauren Schmeiss of Sac State competes on floor at the NorCal Classic. Her routine is a fan favorite and she recorded a 9.700 today @SacStGymnastics pic.twitter.com/bsIAHlT5D6

As a unit though, the Hornets couldn’t put together more than two scores above 9.650 and recorded a 47.800 on the event.

“I think it was what was expected because we didn’t really know what anyone would bring because they haven’t had any experience,” said senior Lauren Schmeiss. “So I think now having the under pressure situation and them just kind of feeling it out, it will help us.”

Schmeiss helped solidify the team’s scores by averaging a score above 9.500 on vault, beam and floor.

Friday, Schmeiss helped the Hornets record a 48.625 on floor while Belkoff led the way with a career-high 9.800.

“[Belkoff] had it in her, great meet from my viewpoint,” Solorio said. “Her confidence has really grown.”