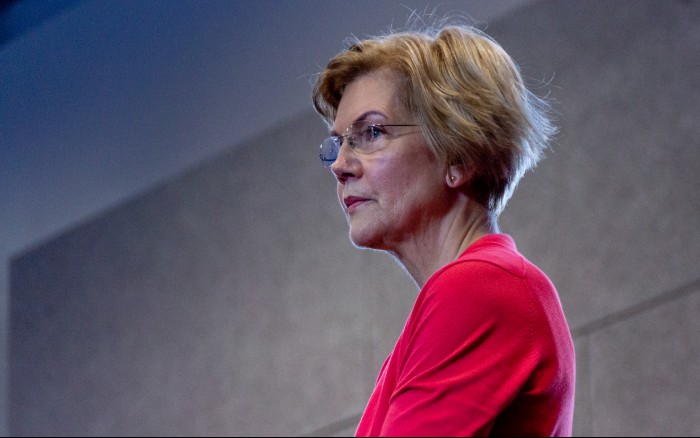 Sen. Elizabeth Warren, D-Mass., makes a campaign stop at Manchester Community College in Manchester, New Hampshire on Saturday, Jan. 12, 2019. Warren announced on Monday, Dec. 31, 2018 that she would run for President in the 2020 Democratic primaries.

Warren said in the letter, sent Jan. 9, 2019, that a report from the Consumer Financial Bureau showed that fees charged to college students for debit cards and other services were over three times the average of other banks.

In total, students at the 31 colleges partnered with Wells Fargo paid an average of $46.99 in annual fees, according to Warren. According to the Consumer Financial Bureau Report, “at least half of students using a sponsored account at most colleges were not charged any account fees,” in the 2016-2017 school year.

Ashley Woolheater, Warren’s press secretary, said that the senator is “a leading figure in holding Wells Fargo accountable,” citing the Senator’s calls for federal enforcement against the bank.

Nelsen, in a statement to The State Hornet, addressed Warren’s concerns listed in the letter.

“I appreciate Senator Warren’s commitment to the financial well-being of our students, and I share many of her concerns,” Nelsen said.

Nelsen said that Wells Fargo is a supporter of Sac State and has donated to the Veterans Center and ASI Food Pantry.

The letter comes as Warren begins her run for president, which she announced on Dec. 31, 2018. Warren is one of four Democratic congresswomen running for her party’s nomination. The other congresswomen include Rep. Tulsi Gabbard of Hawaii, Sen. Kirsten Gillibrand of New York and Sen. Kamala Harris of California.