Delta Chi under investigation after photo was sent to university administrators 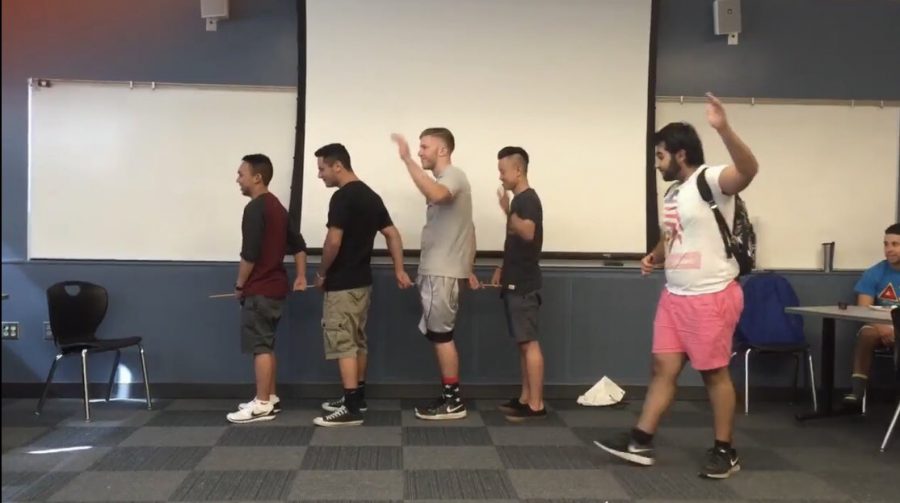 Sacramento State is investigating a potential hazing incident after an anonymous person emailed The State Hornet and President Nelsen's interim chief of staff Cely Smart. The sender described the photo as depicting an imitation of 'the elephant walk,' a hazing practice where members stand in a line or circle and walk while holding the genitals of the person behind them.

A former member of Sacramento State’s Delta Chi chapter says a photo he is in — one that has sparked an investigation into the fraternity — was deliberately misinterpreted as evidence of hazing by its anonymous sender.

Baron Nguyen, who attended Sac State for two years, spending one as a member of Delta Chi, identified himself as being in the photo that was anonymously sent to university administration and The State Hornet.

Nguyen said the photo, which depicts him and three other pledges participating in a simulation of “the elephant walk,” was taken at a new member event in the Academic Information Resource Center in 2015.

The focus that day, Nguyen said, was for pledges to show examples of hazing that they were familiar with through skits.

“It was all in an educational realm of thought,” Nguyen said. “It wasn’t malicious or anything.”

All forms of hazing are banned at Sac State, with possible punishments including academic discipline for individual students and suspension or removal of organizations found guilty of hazing its members said Beth Lesen, associate vice president for student affairs and dean of students at Sac State.

In the email, the sender described the photo as an example of hazing, and one that only showed a small portion of an extent of problematic behavior.

“From alcoholism, to hazing, from sexist behavior, to misogyny, and even sexual assault and rape culture,” wrote the anonymous sender.

Nguyen said that during his year in Delta Chi, he didn’t see hazing or anything described in the email in his or other fraternities.

“We need a lot of information to know what all is going on in that picture,” said Lesen. “We have a lot of questions and that’s all part of the investigation.”