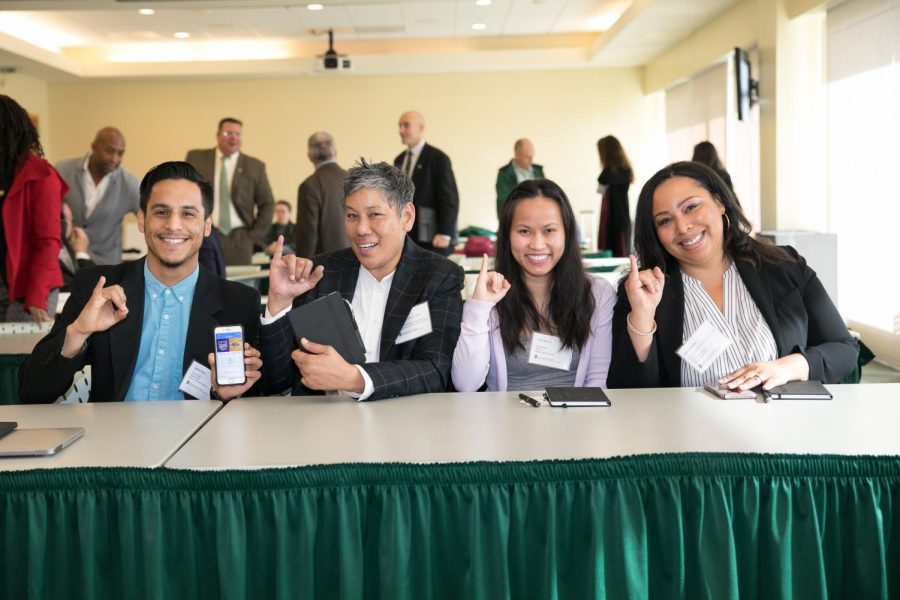 From left, Adrian Pinon, Soraya Rigor, Thoa Nguyen and Nishay Janel Gordon, are the Sac State students that participated in the elevator pitch competition that took place in November. Students pitches were evaluated by a panel of judges and were awarded cash prizes to bring their ideas to fruition.

Room 1520 in the library is still a large, underfurnished space, blank and amazingly clean. A single table with several low chairs around are flanked by rolling whiteboards. Around the edge of the large room are a few desks ready to receive computers.

Katherine Cota, the executive director for The Carlsen Center for Innovation and Entrepreneurship, still has an office sign made of paper and tape that says the furniture and technology are coming in late February, but business is already underway. The Carlsen Center may feel like a startup, but Sacramento State hopes it’s where startups will get their start.

The Carlsen Center opened up in November of 2017, with a $6 million donation from Dale and Katy Carlsen, with a goal of promoting entrepreneurship among Sac State students. Dale Carlsen is a Sac State alumnus and founder of the Sleep Train Mattress Center.

The Carlsen Center is home to a business incubation program, where Sac State students can receive support and help setting up their own businesses, as well as receive help networking out to investors.

“They walk in the door and they have a conversation with us,” Cota said. “We have a meeting. Getting into any of our programs that will help with your business idea, or your nonprofit, or even a social good that you want to do is by coming in and having a conversation.”

Through the semester there will be a series of workshops that will focus on business development, nonprofit development and leadership roles in business and nonprofits.

These workshops will be open to all students, faculty and staff, with some being open to community entrepreneurs as well, according to Cota.

There is also a speaker series planned, that Cota says will be open to as many people as they can host. However, arranging the schedules with the guests can be difficult, she said.

“All of the companies in the ideation competition are pre-revenue, pre-sales,” said Cota. “They have an idea.”

The contest rotates every year between Butte College, Chico State, Humboldt State and Sac State. This year, Sonoma State, Stanislaus State, and Sierra College have been invited to send contestants as well.

Students pitching business ideas might have done customer discovery or market research into the possible competition before the event. They may even be in the process of designing the product or protecting its intellectual property through trademark, copyright or patent.

“Could they walk in and just say this is my idea?” Cota said. “Yes, but they’re not going to have enough to fit into the things they need to talk about and they’re being judged on.”

The judging comes from a panel of local investors as well as the board members of The Carlsen Center, many of which are members of the business community, according to Cota.

“The hope is students will use their prize money to advance their particular idea.”

Cota hopes there are enough contestants this year that they can split the for-profit and the nonprofit pitches into different categories.

“That way you’re comparing like-to-like,” Cota said. “Sometimes it’s a little difficult to compare a for-profit to a nonprofit, because often times the objectives those two types of entities have are very different.”

During The Future Four & More competition, The Carlsen Center has several other events in mind such as a proposed community pitch event for businesses with more developed ideas to reach out to investors and a keynote speaker.

Cota says these events are being added to the competition to make up for their cancellation last semester due to the Camp Fire.

Soraya Rigor, a student who participated in the Carlsen Center’s Student Elevator Pitch Competition last November, said the free workshops the Carlsen Center provided helped figure out which of her ideas were viable and sculpt them to launch.

“I was going to make a joke because of the amount of emotion I felt, and it feels like winning an Oscar,” Rigor said. “I could (not) have (done) any of this without the Carlsen group of mentors and staff who carried us into that moment.”

Cota says The Carlsen Center is continuing to work with the students who participated in the elevator pitch competition to help develop their ideas further and bring them to other competitions such as the Big Bang! at UC Davis.