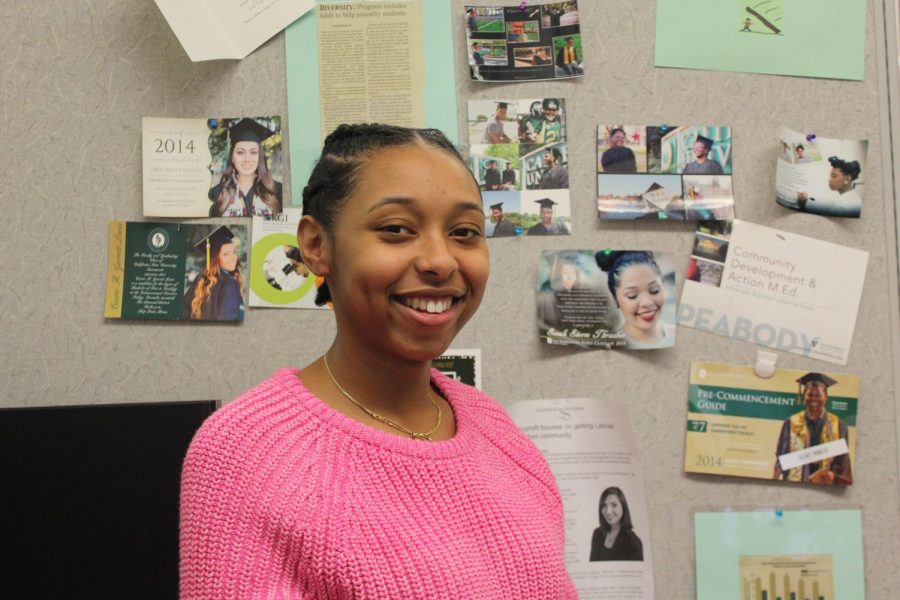 Senior Morgan Mitchell said her research experience in Sac State's McNair Scholars Program prepared her to apply to graduate schools, at the program's office Thursday, Dec. 6, 2018. Mitchell said she found most schools ask similar information, so one well-written essay could serve as a template for the rest of her applications.

Before their undergraduate careers come to an end at Sacramento State, some seniors are mapping out the next step in their next academic journey: graduate school.

Applying for graduate school is intense for Christine Chen, a health science major.

“I’ve been so tired this entire semester,” Chen said. “I feel like I’ve just been running. I haven’t really been stopping to breathe, in honesty.”

Chen said she wants to become a nurse and possibly a part-time college instructor in the health field.

“It feels really overwhelming because I honestly hadn’t thought about applying for grad school until probably the end of my junior year,” Chen said. “I just knew there was a lot. Like, I needed to spend time writing my personal statement, getting my grades up, such and such.”

Chen said her decision surprised her parents, who she said expected her to immediately join the workforce after graduating.

“I’ve had to focus more about what I want, more than satisfying my parents, and meeting their expectations,” Chen said.

Senior sociology student Salvador Oregel-Valencia said he is aiming for law school with dreams of becoming an immigration attorney. First, he needs to write his personal statement and prepare for the Law School Admission Test.

“It’s terrible,” Oregel-Valencia said. “I don’t feel lost anymore, but at the beginning, I felt lost because I didn’t know who to turn to, who to ask questions to, where to begin, what was the application process, but over time, I’ve been asking around and doing my research and now I feel more comfortable on what to do.”

As a first-generation college student, Oregel-Valencia said his family is supportive, but they do not understand the application process.

“So, they could say that I can do it — yes, I can do it, but I need more than just those words,” Oregel-Valencia said. “Like…resources, or like, guidance. Mostly guidance because sometimes I do feel lost, and I don’t know what I’m doing.”

Jose Martinez, graduate admissions supervisor at Sacramento State’s Office of Graduate Studies, said that one of the things that undergraduates face during the application process is competition.

“One of the things that is very important is if they have an opportunity as an undergrad to engage in some type of research,” Martinez said. “So, either working with a faculty member who’s doing a research project, do some research themselves, data analysis – those kind of skill sets that are usually looked at at the graduate level.”

Morgan Mitchell, a former McNair Scholar, said she wants to become a math professor one day. Mitchell, a senior double-major in math and women’s studies, said she is applying for graduate school in math education.

“It can be stressful. It can also get overwhelming,” Mitchell said, on submitting applications. “I would say though, because I had a lot of preparation – so, in terms of the documents I need for grad school – that was helpful. If I wouldn’t have had those, I would be ten times more stressed.”

Mitchell said she wrote a personal statement, a statement of purpose, a resume, and a curriculum vitae through the program, which serve as a template for her applications.

“So, I just took those and kind of altered them, you know, like maybe added a little bit here and there, but for the most part, a lot of grad apps they’re all very similar…you just need one really, really great essay, and then you can start changing it and altering it to submit them,” Mitchell said.