OPINION: Improv made me who I am today 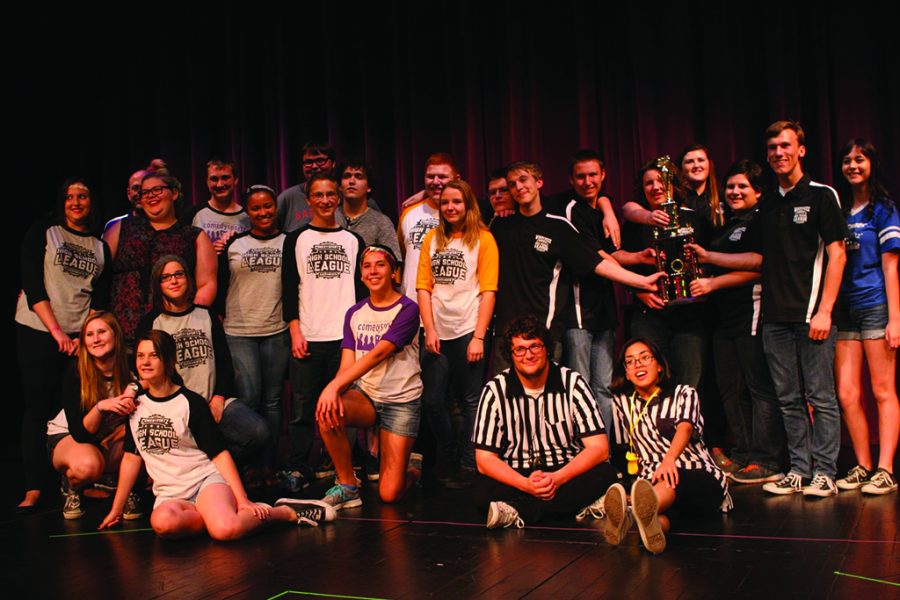 This is me, sitting in stripes toward center, after a full day of hosting ComedySportz matches for High School League teams. This day, and many others in the last six years, will be ingrained in my memory forever for how fun, uplifting and inspiring it was. I would forget the haircut if I could.

If it hasn’t happened to you yet, it’ll happen soon enough. It’s a rite of passage for college-aged people; someday, somewhere, someone will invite you to an improv show.

As someone who has invited an uncounted amount of people to my shows, I can say confidently: I don’t particularly care if you go. And I can’t guarantee you’ll like it if you do.

But I do think improv, cult or not, has had a tremendous, positive impact on my life as well as the lives of many others.

One common misconception about a lot of improvisors is that they all start doing it because they think they are funny, or aspire to be. Some people do get into it for that reason; they tend to be my least favorite people in the improv community.

It’s been around seven years since I walked into my first meeting of improv club at American River College. I knew I liked improv — or more accurately, knew I liked “Whose Line Is It Anyway?”, the world’s most popular example of improv — but more than anything, I was a lonely 19-year-old looking for a post-high school community.

I immediately found it. I don’t remember a second of the two hours we spent in that small black box theater space. But that night after the meeting ended, a group left for dinner at Denny’s. We spent all night, and morning, talking about anything and everything, resolving to stay until the sun came up.

More friends came. More memories were made. After that first semester I got tired of being bad at the improv part and committed to taking classes and attending workshops to justify my hobby.

Since then, I’ve just never stopped. I love the artform; my initial narrow understanding of games and formats has expanded over time. I’ve performed for crowds embarrassingly small and terrifyingly big. And I’ve laughed until I cried more times than I can count.

It’s still the community — the real friends and faux family — that keep me around.

I am now the assistant manager at CSz-Sacramento, Home of ComedySportz. I do a lot of shows — a lot — and am there four days a week at least. It’s my second home, and it’s my favorite place to go in any mood: happy, sad, angry, lonely or nothing. I know I will leave feeling better than I arrived.

Improv has also made me, and a lot of others, a better person. The core values of improv can all be applied to life in ways that are knock-you-over-the-head obvious and sneakily subtle.

The first, and most well-known rule of improv, is “Yes, And.” There is little I can say about this rule that is revelatory or hasn’t already been said, but it’s supposed to go like this:

Saying “yes” in a scene means accepting what is established is truth. If your partner comes in and refers to you as “Dad,” don’t leave them hanging or reject them for a cheap laugh. That would be saying no.

The “and” is how improv builds stories. After you say yes, you contribute further. If you are identified as a father, you might then establish what kind of father you are. Maybe you’re supportive, angry, disappointed, insane; it rarely matters.

That is one of my favorite lessons from improv: there are few wrong answers. As long as your choice agrees with the initial offer, and doesn’t take the scene to a place that your partner or audience isn’t comfortable with, go for it.

The same can be said for real life. Doing improv has helped me realize how little other people’s actions and feelings matter to my life and my happiness. As long as someone’s choices don’t directly harm me or someone I know, I am either here to help or get out of their way.

Life, for many of us, is at its most turbulent during these formative college years. Improv has grounded me and given me a home. It helps build confidence and public speaking skills, and has made me less prone to stress, anxiety and anger.

And plus, it’s fun and funny. Usually. And now, to make it all official; I am formally inviting you all to my improv show.