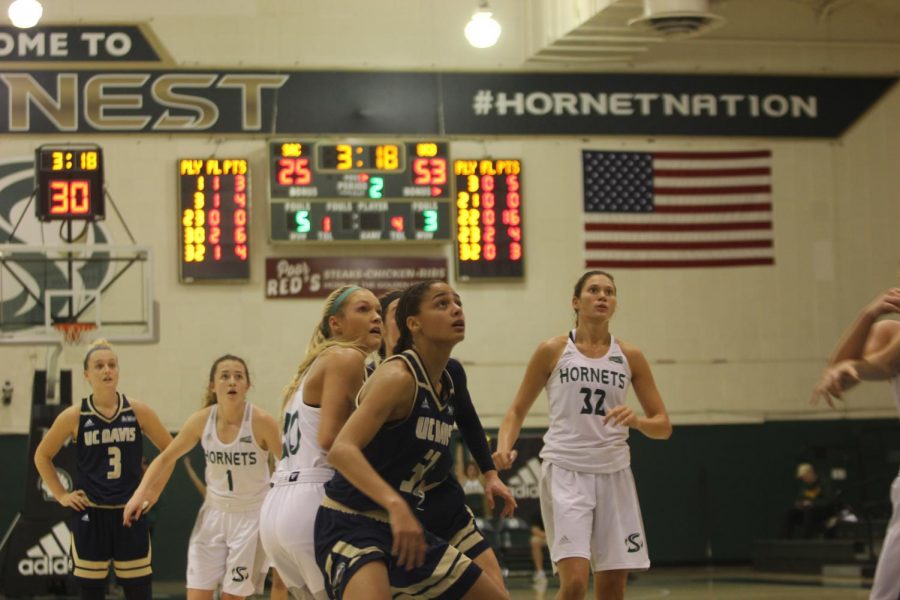 Players on both teams anticipate a rebound following a free-throw attempt by Sac State junior guard Hannah Friend in a 109-60 loss to UC Davis at the Nest on Dec. 7.

The Sacramento State women’s basketball team met with University of California, Davis in the 59th Causeway Classic Friday, resulting in an Aggies victory by a large margin.

The Hornets [3-3] and the Aggies [4-5] came into the game tied in head-to-head matchups with 29 wins each. UC Davis made a statement with their 30th win in the series, winning by nearly 50 points.

For the second game in a row, Sac State got off to a slow start in the first quarter. Unlike in the game on Wednesday against the University of San Francisco Dons, the Hornets were unable to come back and make the game competitive as the Aggies continued to pour it on.

The Aggies outscored the Hornets in every quarter except the third. UC Davis led 32-14 after the first quarter and 63-27 at halftime. Sac State came out in the third quarter and outscored the Aggies 17-16, but still trailed by 35 points heading into the fourth quarter.

In the rivalry matchup, UC Davis refused to take their foot off the accelerator and continued to hammer the Hornets. The Aggies outscored Sac State 30-16 in the final period, winning the game by almost 50 points.

“We just haven’t been practicing as hard as we need to make the game easier than our practices,” Sac State junior guard Hannah Friend said. “We’ve discovered that our practices aren’t as demanding as the game and we need it to be to to take this pressure and figure out what we need to do.”

UC Davis also led by a wide margin in assists and rebounds. The Aggies outrebounded the Hornets 67-32 and had five times as many assists with 20 to Sac State’s 4.

The Hornets were led in scoring, rebounding and blocks by Friend who scored 19 points, 7 rebounds and 2 blocks.

Junior guard Tiara Scott was the only other Hornet score points in the double digits, scoring 10 points. Junior forward Kennedy Nicholas had 8 points and 6 rebounds.

After the game, Sac State head coach Bunky Harkleroad was unavailable for comment on the loss.

Senior forward Morgan Bertsch led UC Davis to victory with a record-setting performance. Bertsch scored 40 points on 16-28 shooting from the field and was a perfect 8-8 from the free-throw line, while adding 9 rebounds and 2 blocks in 22 minutes of action.

“Knowing the history of [UC Davis] and how successful women’s basketball has been in the past, it’s pretty cool,” Bertsch said. “It’s a pretty nice accomplishment and it’s a testament to this program and how selfless we are as a program that we can make enough great passes to get to 40.

“A huge part of this game was my teammates finding me on the fastbreak, 2 on 1 opportunities, really being selfless and that led to my success tonight.”

“She’s a really great player, I’m proud of her, as proud as I could be,” Friend said. “We just didn’t step to the plate and we need to use this as motivation to get back into the gym and work harder.”

Sac State will have some extra time to practice and think about their loss. The Hornets next game will be Wednesday, Dec. 19 at New Mexico in the annual Lobos Invitational.

The Hornets will also take on Hampton in the tournament on Dec. 20. The game against New Mexico on the 19th tips off at 6:05 p.m.