Senior Caitlin Prothe makes the most of her collegiate soccer career with a dynamic style in her last games while sustaining injuries.

Sac State senior Caitlin Prothe has become a captain in her last two seasons as a Hornet. She has gone through numerous injuries throughout her career.

Caitlin Prothe’s career at Sacramento State began four years ago, just one season after her soccer career was in jeopardy when she tore a ligament in her ankle in Spokane, Washington.

The year has been rough with many team members suffering injuries, according to Sac State women’s soccer head coach Randy Dedini.

Dedini said she was injured for the first six to eight games this season. Prothe said she will not let injuries that arise over this season stop her from putting everything she has into the sport.

“I think coming in with such heavy senior classes made me grow up or appreciate soccer more, because you see all these older seniors, and it’s their last year, and even coaches are like, make sure you put everything in now because by the time you’re a senior, you’re gonna be like, ‘Oh shoot, where did the time go?’” Prothe said.

According to Dedini, her hard work seems to be paying off and her talents soar beyond the ball, with “more of a captain’s voice every year.”

“She’s very positive, very optimistic, sweet to her teammates, she’s been a great leader for us these last couple of years,” Dedini said. “She’s a fantastic player, and on the ball, she’s got some of the sickest skills that you’re ever gonna see on a player.” 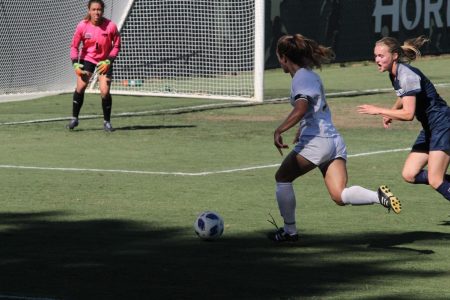 Jose Gaglianone – The State HornetSacramento State Hornets midfielder Caitlin Prothe makes a drive towards the goal to try to score a goal. The Hornets were able to win their first match against Nevada 3-2 on Sept. 7 at Hornet Field.

“She can dribble people and make them look silly. Dynamic in that she can take two, three players on and still score a goal,” Dedini said. “I wish I had 30 of her.”

Reed, a midfielder and defender on the team, said, “Cait’s a pretty shifty player, she’s pretty technical, she’s really good with the ball at her feet.”

Reed said she still has a picture of her and Prothe hugging at a game last school year, when Reed assisted a goal for Prothe.

“We just worked together so well, she knew exactly where I was going and I knew she was gonna spin out, and I just found her through and she scored it,” Reed said. “Just having that mental connection knowing what other people are gonna do off you [made that experience especially memorable.]”

Prothe said she started playing soccer when her family settled in Spokane, Washington after her father retired from the U.S. Air Force.

Her mother sends her small motivational messages before games to support her from afar, she said. In her last year in Washington, she had surgery on her ankle from tearing a ligament.

Prothe’s high “soccer IQ” is an element of her success in situations like that, Reed said. Dedini said she has always been a special player, but things really started to change a few years ago.

Prothe scored her first goal for Sac State as a sophomore after not scoring any goals scored as a freshman. But her junior year, she scored five. This season, Prothe has scored five goals.

RELATED: Sophomore brings experience, excitement and expectations to the pitch

“In these last couple of years, she’s really taken her fitness and physicality in the weight room, and just getting herself extremely fit for the season,” Dedini said. That’s taken her to the next level.”

She will attend Sac State for one more year to complete her undergraduate degree in business, with a concentration in finance. She said she is uncertain what she will do immediately after graduation, but hopes to work in nonprofits in the future.

Prothe said she hopes soccer will always be a part of her life, as a volunteer or future coach.

“Every day, you gotta come out and want to get better, whether that’s your first touch, or making that extra run down the field, or recovering when you lose the ball,” Prothe said. “It all adds up to those big moments in the game.”