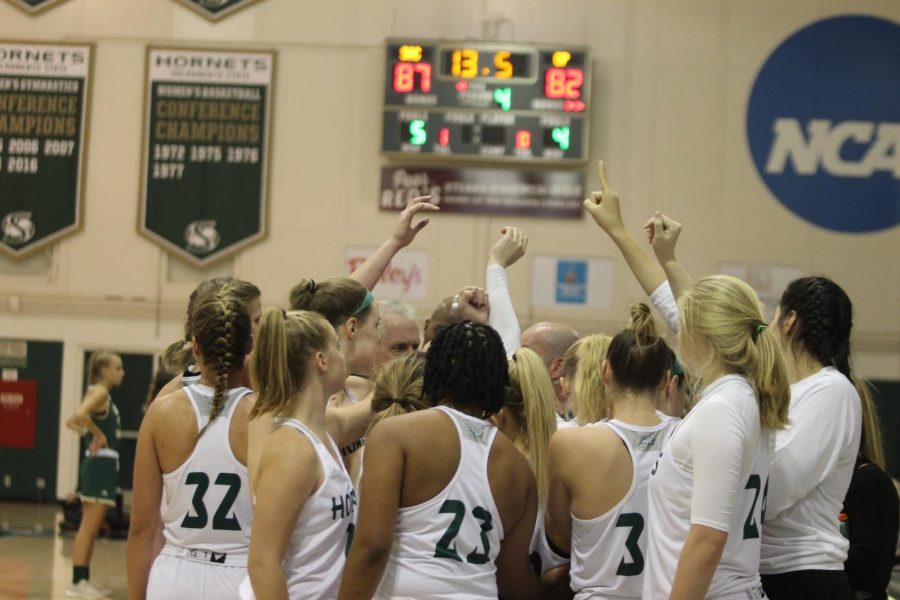 The Hornets huddle and go over defensive schemes with 13.5 seconds left and a 87-82 lead against Cal Poly Nov. 11.

Due to air quality concerns, Sacramento State has postponed both men’s and women’s basketball games planned for Friday.

Ohio State released a statement that said their main concern was their “student-athletes health and wellness” when deciding whether or not to postpone the defending Big 10 champions’ trip to the Nest.

Ohio State women’s basketball will not be playing at Sacramento State tomorrow night. Story will be up soon @TheStateHornet @SH_Sports https://t.co/3ru4GVeaQY

The Buckeyes game scheduled with Stanford Sunday is also in question, according to an announcement made by Ohio State on Thursday. Ohio State is working with both Sac State and Stanford to find a date to make up the games.

According to Hornet Athletics, Sac State will also postpone the other half of Friday’s scheduled doubleheader, as the men’s game against Cal Poly will be rescheduled for another date, possibly for this Saturday afternoon.

Breaking: In addition to @SacStateWBB game against Ohio State being postponed, the other half of the doubleheader, @SacHornetsMBB game against Cal Poly will also be postponed. Story to follow. @SH_Sports @TheStateHornet

Sac State’s campus has been closed the entire week as a result of the Camp Fire.

The State Hornet will continue to update this story as more information becomes available.