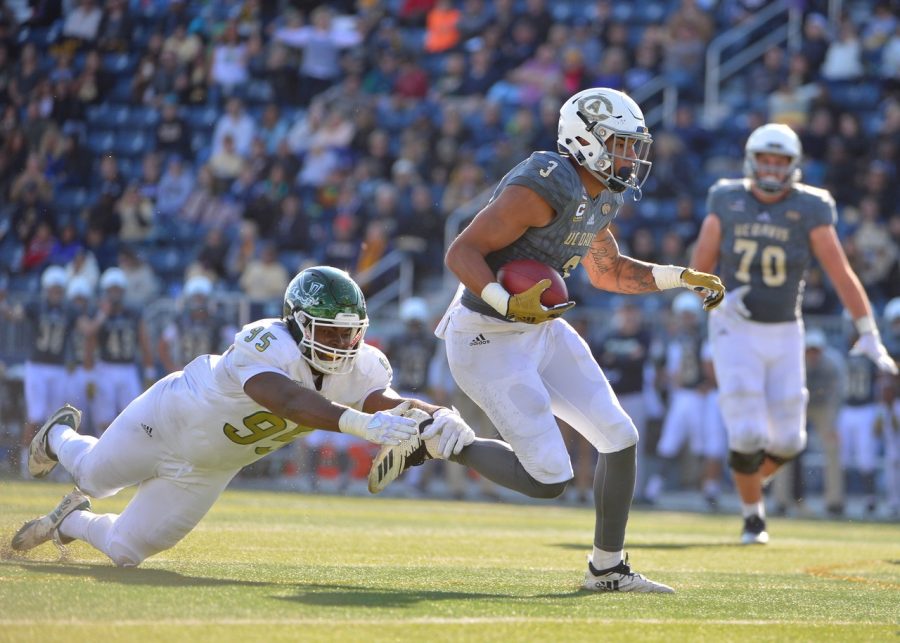 In the Causeway Classic against University of California, Davis, the Sacramento State football team finished its season with another loss [56-13,] and finished with a 2-8 overall season record.

The game was moved from UC Davis to Mackay Stadium at University of Nevada, Reno due to poor air quality from the Camp Fire in Butte County. The Aggies — who are ranked No. 11 nationally — are fighting for a chance to host a home game in the Football Championship Subdivision playoffs.

The Aggies [9-2] never trailed the Hornets throughout the game and took a 14-0 lead within the first five minutes of the game.

The Hornets’ only touchdown in the game came in the second quarter when senior quarterback Kevin Thomson threw an 18-yard completion to freshman Pierre Williams.

Thomson threw 127 yards on 25 passing attempts. Despite suffering back injuries and missing the team’s last three games, he finished the year leading in all passing categories with 1,380 passing yards and eight touchdowns in seven games.

During the game, Williams had three catches for 65 yards and a touchdown. He finished the season leading the team with 31 reception, 553 yards receiving and five receiving touchdowns.

Sophomore running back Elijah Dotson had 14 rushing attempts for 61 yards at the Causeway Classic. He finished the year with 1,154 yards, which was the tenth most rushing yards in the FCS and third in the Big Sky Conference. Dotson led the team with nine touchdowns this season.

The Hornets defense gave up a total of 691 yards at the Causeway Classic.

Aggies quarterback Jake Maier threw for 478 yards and four touchdowns and two of them he threw to Keelan Doss who finished with 205 yards on the game.

Doss is a projected third round pick in the 2019 NFL draft.

The Hornets will open their 2019 season at Arizona State University.