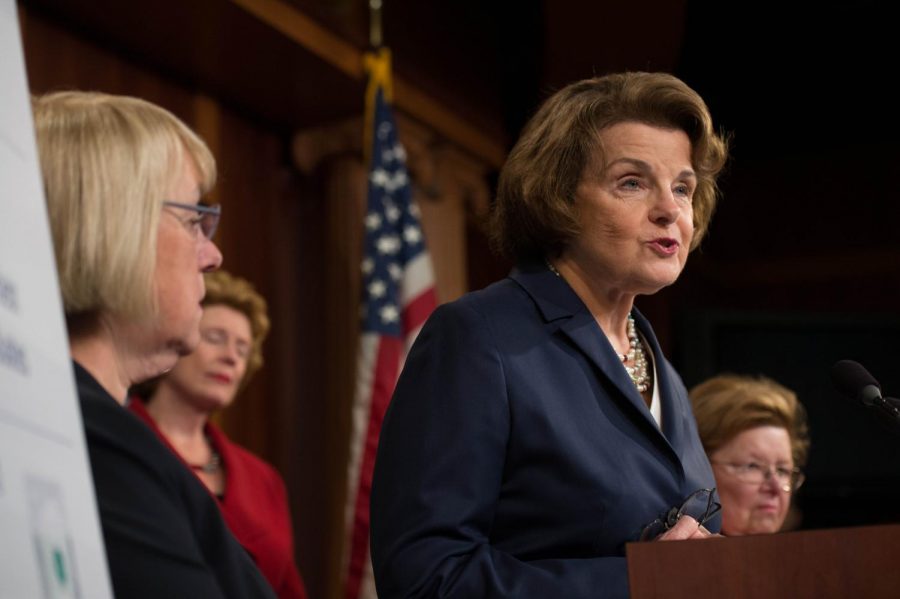 Dianne Feinstein in 2014 giving a speech on how student loans affect female students greater than men. Feinstein is running in the Nov. 6, 2018 election, seeking her 6th term as U.S. Senator.

Students registered to vote can cast ballots for their choice of future lawmakers, judges and other representatives, in addition to proposed legislation for the 2018 midterm elections.

The Associated Students, Inc. at Sac State will shuttle students registered in Sacramento County to the campus vote center at Modoc Hall, where they can drop off ballots or vote in person on Election Day, the college’s website said. The Vote Center is the only one of its kind at a California university for the election.

It is listed among other polling places by the California Secretary of State website, open Saturday 8 a.m. to 4 p.m. until Election Day, when it is open from 7 a.m. to 8 p.m.

“At ASI, the reason that we really push voter registration and actually going and voting is because historically, college students don’t vote in midterm elections specifically,” Aragon said.

The state’s last midterm election in 2014 was a “historic low” for college-age voter turnout, when just 53 percent of young adults were registered to vote and only 8 percent cast ballots, Aragon said.

“It’s important for you to really research these positions, really research the people running and make sure you’re making an informed vote towards somebody that you think is going to support your status as a college student,” Aragon said.

Alexander Bui, a civil engineering major at Sacramento State, said he tries to do his own candidate research before talking to other people.

“I’ve tried to ignore some of the TV ads that are just based on attacks,” Bui said. “I don’t think it’s a very objective or very smart way to go about it. I’ve tried to go and visit their respective candidate pages, and try to figure out what it is they’re saying for themselves.”

Joshua Patton, a Sac State geography major, said he is not yet familiar with the candidates up for election.

“To be honest, I haven’t really looked into it that much yet, I’m over here trying to get my work done for school and everything, and basketball, so I’m real busy right now,” Patton said. “This upcoming weekend, I’m probably gonna take some time just to look at all the candidates and see how they can benefit us.”

For college students who have little time to research, here’s a breakdown of the legislative races in the Sacramento area.

Pan’s platform focuses mainly on access to health care and education, the economy, and “to combat global warming,” his campaign website said. Frame’s campaign website lists some of his key issues as Sacramento’s homelessness, high rent, and human trafficking.

The fight for Congress majority between Democrats and Republicans is intense in District 4, where KCRA 3 reported immigration to be the crux of this particularly controversial race.

McClintock is against California’s status as a sanctuary state, which he said puts communities at risk. Morse said immigration law needs changes, like a reformed Dream Act and an end to family separation policies, according to KRCA 3.

District 4 tends to vote conservatively and demonstrated support for Trump, who won the district by 54 percent in 2016, The Sacramento Bee reported.

The September debate at Mariposa County High School offered 360 seats, The Sacramento Bee reported. Half of the seats went to campaigners, the other half by lottery, and ticket requests were in the multiples of available seats.

Jefferson’s candidacy opposes background checks for guns and did not clearly specify a position on health care. The Sacramento Bee reported that Jefferson said California should comply with federal immigration laws and that he supported decriminalizing all drugs.

Democrat incumbent Jerry McNerney and Republican Marla Livengood are racing to represent the majority of San Joaquin County and parts of Sacramento and Contra Costa counties in the ninth district at the House of Representatives.

Livengood’s campaign website did not specify her position on tax reform or gun control, but said, “Health Care, gas, utility and food costs continue to rise, while self-serving politicians continue to steal our hard-earned income,” and that she is concerned with kids being “at risk at the very place they should feel the safest.” She said she supports de-regulating the agricultural industry.

California State Assembly District 4 has narrowed competitors down to Democrat incumbent Cecilia Aguiar-Curry and Brandon Nelson of the Libertarian party as its future state assemblymember in Sacramento.

His campaign site said he focuses on creating a public campaign finance system in California to lower the influence of money in politics, expanding public health care, renewable energy and criminal justice reform to decrease recidivism.

Cooper’s key issues include protections for victims of sexual assault, greater penalties for sexual offenders, clean energy, community and law enforcement relations, and after-school resources for children, according to his website.