Journal writing after tournaments a priority for head coach 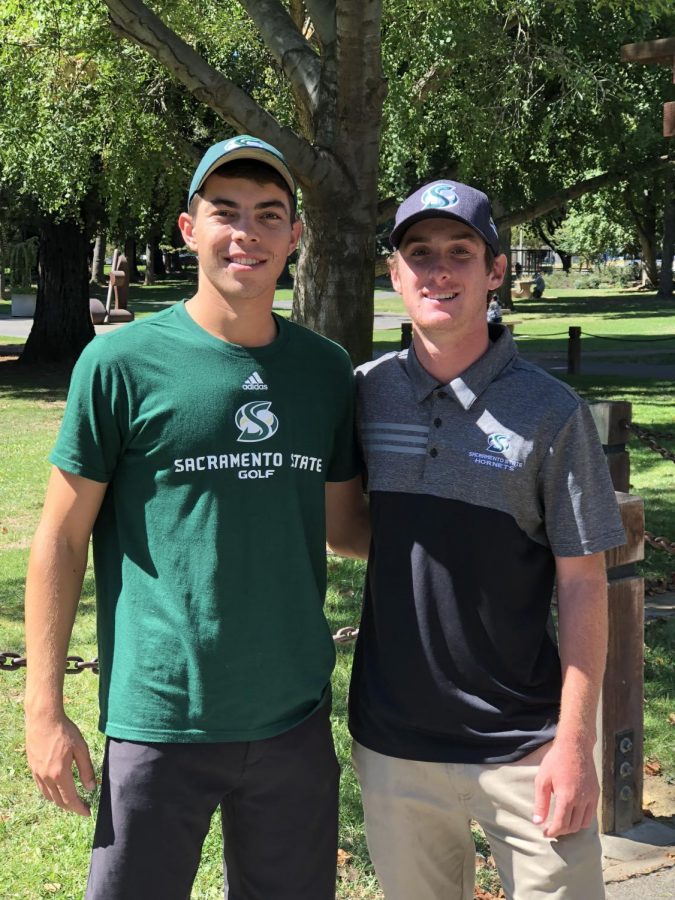 Junior Eric Olsen (left) and freshman Ethan Davidson (right) are looking to learn from their play and improve throughout the rest of the season.

The Sacramento State men’s golf team is off to a difficult start this season as they finished in a tie for 15th place in the Golfweek Conference Challenge in Cedar Rapids, Iowa held on Sept. 16-18.

The third round of the tournament was cancelled and the course deemed unplayable due to heavy rain.

In his fourth season as Sac State head coach Kamden Brakel said this year’s team has some learning to do and skills to build on from their experience at the tournament.

“It reveals weaknesses that costs you strokes that what we need to work on,” Brakel said.

He added that the team played a tough course against strong competition.

UCLA, San Jose State, University of Iowa and Arkansas State were some of the teams participating in the tournament.

Brakel said the biggest thing he took away from last season and tried to apply to this year is an emphasis on the mental game and how his golfers’ view themselves.

Brakel said he makes his players write in a journal every time they play.

“Journals for us are very important and are ways to develop, ways to stay present and not to worry about the outcome,” Brakel said.

Brakel said he is excited about having his two captains, junior redshirt Eric Olsem and sophomore Jeff Carr, back on the team saying they have the leadership qualities the team needs.

Carr, who is coming off an 84th-place finish at the Golfweek Challenge, said he didn’t play as well as he would have liked.

“It was different from anything that I have played before, but if you got out of position, it would penalize you quickly,” Carr said.

Carr said that no matter what he tried, he couldn’t get himself in the right position and kept ending up in the spots he was trying to avoid.

Carr shot a 159 between the two rounds and was the highest score on the team.

He added that no competitors were allowed to practice with their drivers on the driving range because the course is shorter than the average drive.

“The only drivers you were able to practice were the ones you were hitting on the course,” Carr said.

The team’s second captain Olsem shot the lowest score for the team at the tournament with a 145 for a 26th place tied finish.

“I think I played a lot better than my score showed,” Olsem said.

He said that he struggled a lot off of the tee last season, so over the summer he focused on getting the confidence he needed to swing aggressively at the ball and score pars.

Olsem said he spent a lot of time hitting with a driver on holes where he normally wouldn’t need to, which he said gave him more confidence to risk using the driver.

“I took driver out a lot more often than I usually would to get me more comfortable with it,” Olsem said.

He added that the chemistry of the team is different from last season, because everyone on the team loves golf.

“Last year, some people loved it more than others,” Olsem said. “People didn’t want to be the best they can be and this year everyone wants to be the best golfer they could possibly be.”

He added his journal entry would be the same for a week and he would reflect if his goals helped him stay in the present.

The men’s golf team has three freshmen on the roster this season and two of them competed in the opening tournament.

Two of the freshmen, Ethan Davidson and Riley Bell, shot a combined score of 304 strokes over the two rounds in the tournament.

Davidson had the second lowest score on the team in the tournament; only five strokes behind Olsem.

“Everyone had a passion for golf and everyone was motivating each other,” Davidson said. “We all have something to prove and we all need to prove to each other that we are here for a reason.”

Davidson said he looks up to Olsem and Carr because they were the first two people he met when he got to play with Sac State and said the two set a good example for him.

Davidson said writing in a journal is the biggest difference from playing golf in high school to playing at the college level.

“It never even crossed my mind for high school golf,” Davidson said. “As you’re writing it down, it’s evident to see what is wrong and then you go work on it at the driving range.”

Brakel said the plan is for the team to work on their short game and the things that costed them strokes in the GCC tournament.