Hornets have high hopes and goals with rest of season ahead 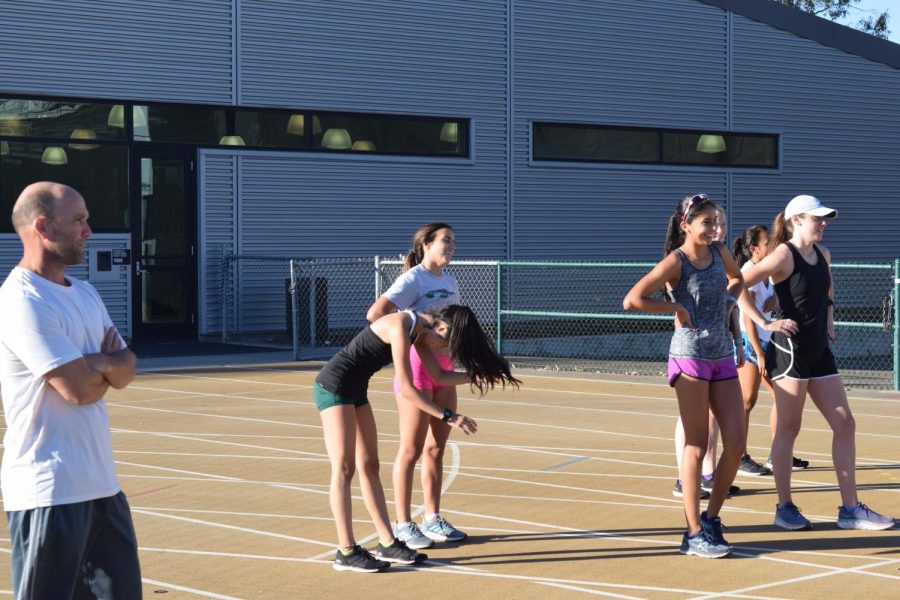 Sac State cross country coach David Monk and a few members of the women's team watch as their fellow teammates run during practice on Wednesday, Sept. 26.

The Sacramento State cross country teams have started the 2018 season off with the common vision of only getting better from here on out.

At their first meet, both the women’s and men’s teams finished with high ranks with the women placing first at the Fresno Cross Country Invitational and the men placing second.

Sac State coach David Monk recognizes his teams’ determination and says the addition of newcomers adds to the overall success achieved so far.

“It was really encouraging and exciting for them to see that the work that they’re putting in is paying off and we’re really excited with some of the newcomers we’ve added; freshmen and transfers,” Monk said. “Both are doing a great job of stepping in and helping us put better performances together.”

Senior captain of the women’s team Amy Quinones notices the shift in team dynamics and said she has faith that this year’s team will continue its top-placing streak.

“Our team has really been able to pack up and work together and we’ve been doing things we haven’t done in a really long time,” Quinones said. “I think we’re really going to shock each other with what we can do championship season.”

Adding to the observable difference seen by Quinones, Monk said so far this season everything is coming together.

I’ve been here,” Monk said. “I think that’s a credit to the athletes taking responsibility over the summer and putting in the work that needed to be put in.”

The teams’ second meet of the season at University of California, Riverside resulted in a fourth-place finish out of 21 teams for the women’s team and sixth place for the men’s team, an improvement from last year.

“We placed second in our first meet and we placed sixth at our second meet and seventh the year before so we’re improving,” said junior transfer athlete Anthony Lemus.

Monk said this year’s team has a strong sense of ownership, allowing Sac State to be represented to the best of its ability.

The performance provided by both teams can also be attributed by the bond shared with one another, a strength the group has, said both Monk and Quinones.

“Our greatest strength as a team I think would be having faith in each other,” Quinones said. “We’ve really built a strong community as a team. We’re all really close and we all get along really well.”

While the first two meets of the season for the Hornets have paved way for what’s to come, injury stands as an agreed obstacle the team continues to face, according to Lemus.

“The biggest challenge for sure is injuries,” Lemus said. “A lot of the guys have been training super hard so we’ve been having a lot of us get pretty injured.”

In agreement with Lemus, Quinones said that health is a priority due to the team being young, with some of the newcomers being fresh out of high school so strength training is a must.

Although injuries pose as a barrier, Monk is positive that both teams will strive past it.

“They want to elevate the status of Sacramento State cross country and distance running and are willing to work for it,” Monk said. “When you have talented, hard-working people who are all out for the same mission, then you’re going to be in a position to do some pretty special things.”