EDITORIAL: Be the generation that commits to eliminating toxic sexual behavior 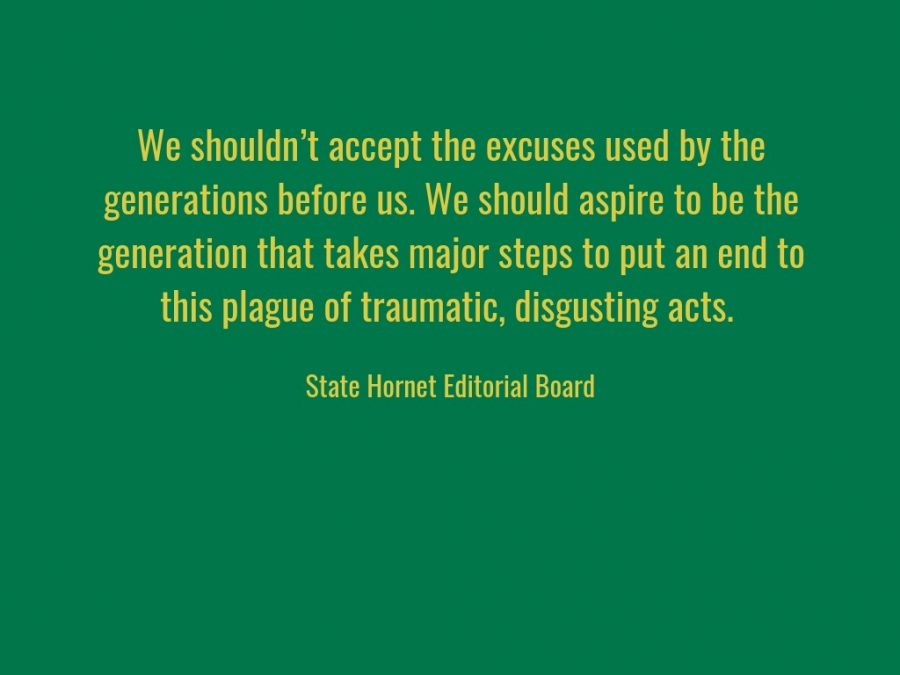 The momentum over the last two years — since Donald Trump was elected, since Harvey Weinstein was banished, since Bill Cosby was sentenced — has been pushing toward a future we’d all like to live in. One where sexual assault and harassment no longer exist.

It’s sad to know that this idealized future will never exist. As long as there are people, and as long as some of those people have power, those people will think about abusing that power. And sometimes they will.

But all of these movements — #MeToo, #TimesUp, #BelieveWomen — cannot be wasted. Those of us who have been college students throughout these movements have a moral obligation to pay attention, absorb these days, months and years, and move forward in life with a goal of ending sexual assault.

Time and time again we hear, “Things were different back then,” to excuse instances of sexual harassment. This is not how we should allow our generation to be described in the future.

Things aren’t as different as you’d think. Some people have dubbed 2018 the “Year of the Woman.” In 1992, people did the same thing following Anita Hill’s testimony against then-prospective Supreme Court justice Clarence Thomas.

Hill was both lauded as a hero and decried as a scorned woman trying to ruin a man’s career. In the end, Thomas was confirmed to the position where he still sits. But in the following election, more women were elected to Congress than any year before in U.S. history; the future looked bright.

Christine Blasey Ford was both lauded as a hero and labeled a political operative. In the end, Brett Kavanaugh was confirmed to the position where he will presumably sit for decades. More women will likely be elected to Congress this year, but too much has happened recently to see a bright future.

We shouldn’t accept the excuses used by the generations before us. We should aspire to be the generation that takes major steps to put an end to this plague of traumatic, disgusting acts.

If we continue to follow this trend of accepting sexual assault as a normal aspect of our culture, when will it ever stop? Who will be the generation that finally says, “Enough is enough?”

That generation needs to be us.

The editors of The State Hornet wanted to amplify voices of survivors. Many came forward, few were willing to have their stories published. It is imperative to read, listen and watch survivors talk about their experiences; it is vital to realize how many people have been affected.

People need to be vigilant, for themselves and others. Keep an eye on your friends, classmates, team members, coworkers or even just strangers. If you see something concerning, don’t be afraid to ask a question. If you know something is happening, think about intervening; sometimes, the victim can’t.

Victims and survivors: document. Maybe you can’t report immediately, but you can take screenshots, write down notes, collect evidence and build a case for when you can report.

If you have been assaulted or raped, don’t give in to ignorant opinions from those who don’t know or even do know what happened to you. Those opinions can come from hurtful places; online trolls, yes, but also friends and family. Don’t listen to them. Correct them if you can muster it.

You weren’t too drunk, too promiscuous, too careless. You were taken advantage of, your trust was betrayed and you are just as valuable of a person before you were hurt as you are after. Don’t blame yourself and don’t let others blame you. Blame the ones who did it when they knew better.

The momentum is real. Our society’s tendencies to aid and abet rape, sexual assault and sexual harassment culture have to come to an end. Students at Sacramento State and all other colleges are the future of this country; it’s time to embrace that reality and start shaping it into something we can be proud of.