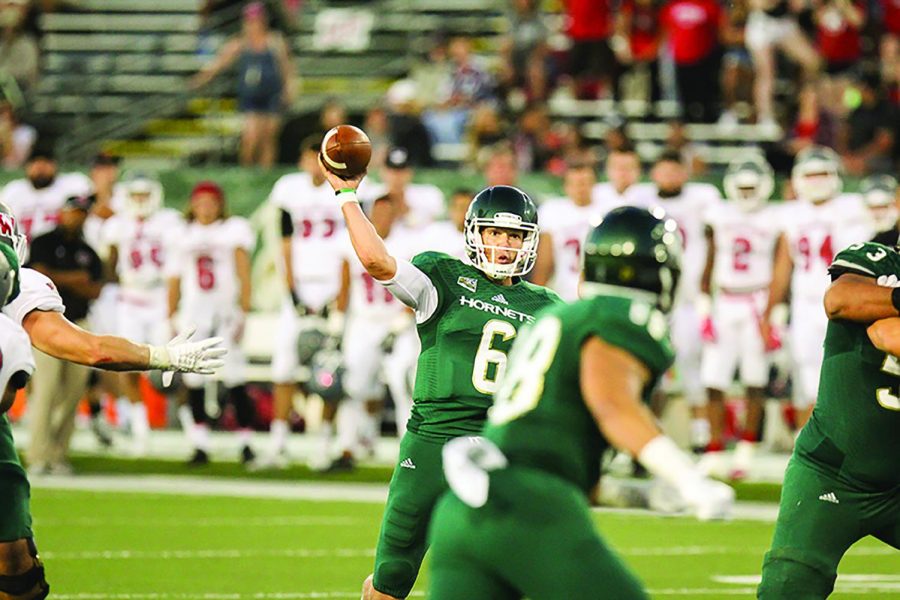 Sophomore Nate Ketteringham throws the ball against Western Oregon, Sept. 3, 2016. Ketteringham is one of many football players that transferred from Sac State soon after Jody Sears took over as head coach.

Since Jody Sears arrived at Sacramento State in 2014, 72 players have left the Sac State football program — with most leaving after the 2016 season.

A total of 28 players who were underclassmen in 2016 were not on the roster in 2017. Some said they left for medical reasons, some for unknown reasons, and some for other issues like having a disagreement with Sears.

“We all left because we wanted something better,” former defensive back Joey Banks said.

Other players transferred to different universities to play but have since stopped playing: Jabarri Johnson went to Montana State and played until 2017, and Tamas Stewart went to North Dakota and also played until 2017.

Thompson, Elefante, Jountti, Jabarri Johnson, Stewart and Ketteringham all declined to comment on the reasons they left Sac State.

“That 2016 team was really talented,” PJ Johnson said. “I thought we would go undefeated.”

The State Hornet requested comment from Sears through Hornet Athletics. As of press time Sears had not provided comment.

PJ Johnson is a Sacramento local who played at Burbank High School and is now a starting defensive tackle at the University of Arizona.

He became a starter at Sac State heading into his sophomore season in 2016. He said that he immediately had issues with Sac State head coach Jody Sears.

Johnson said that the pair’s issues may have stemmed from the fact that he wore a grill, something he had worn for more than 10 years. Johnson said grills were something that Sears didn’t like, and Johnson said he banned the team from wearing them in 2015.

“Me and Jody bumped heads all the time,” Johnson said. “By the way I looked, he assumed I was a bad kid, and kept stereotyping me.”

He said that on another occasion he was practicing on a broken foot during spring practice. He said he was pushed into a spot where all of his weight was on that foot and he fell down. After practice in the film room, Johnson said that Sears analyzed that play in front of the team.

“Jody embarrassed me in front of the whole team,” Johnson said. “He pulled up this play and ripped me for it, not really what went wrong, he just said I got dominated and destroyed and that this is film of terrible football and I should be ashamed.”

Johnson has two children in the area and could go to each of his younger brother’s – national recruit D.J. Johnson who is now at the University of Oregon – high school games while he was playing at Sac State.

“As long as I had a scholarship, I was staying here no matter what,” Johnson said. “I loved Sacramento.”

After his first year at Sac State, the coaching staff attempted to move him to the offensive line. Johnson said no, and said he was told that if he wasn’t an All-American the next season, that he would be cut.

His season ended early because of an injury on Sept. 17, 2016. Johnson didn’t want to have the surgery until after the winter vacation because he needed to work to support his family.

Johnson enrolled at City College of San Francisco and was ranked by 247Sports as the fourth best defensive tackle in the state. He landed scholarship offers from programs like Rutgers University, University of Kansas and Arizona. He landed at Arizona where he has recorded sacks in the Wildcats last two games against Oregon State and USC.

Late in the third quarter of Sacramento State’s Oct. 24, 2015 homecoming win over Idaho State, then redshirt freshman Joey Banks intercepted a pass and returned the ball 41-yards for a touchdown.

On Nov. 14, 2015 he played his final game as a Hornet. Despite starting just three games, and missing three of the team’s 11 games in 2015, Banks finished fifth on the team in tackles.

He now starts at the University of Buffalo.

Like Johnson, Banks had issues with Sears because he wanted to wear a grill. Banks said problems started when Sac State head football coach Jody Sears didn’t like that players on the team wore grills.

Banks said that Sears also didn’t like that he wore black jeans and sneakers on game days while white players wore Wranglers. Banks said the environment wasn’t really focused on winning and instead it was on enforcing rules.

“The kind of players we were, he didn’t really like,” Banks said. “He made it seem like it was an image thing.”

Johnson said that Banks was the top player in the 2014 Sac State freshman class along with wide receiver Isiah Hennie. Hennie would later go on to become the 12th player in school history to record at least 100 career receptions.

Related: Sac State loses in a shootout against Montana

Banks said that by the time the 2015 season was coming to an end, Banks knew he would be leaving.

“The last game, I already had it on my mind, I think Sears kind of knew I was leaving,” Banks said. “We didn’t see eye to eye. Some things didn’t make sense.”

Banks played with Johnson at City College of San Francisco where he finished the season with 67 tackles before transferring to Buffalo this year where he has solidified himself as a starter.

Dalpe came to Sac State after being a starting offensive lineman at Orange Lutheran High School for four years. He said that when he arrived at Sac State, he felt like the players weren’t given any respect in anything they did. He said players were working 30+ hours a week and that the culture was draining.

“Sears was the head of the program and was the reason why most kids were leaving,” Dalpe said. “I left eventually because Sears switched me to defense in the middle of spring ball when I never played defense since high school and he expected me to just show up and perform. When I explained that to him, he wasn’t hearing it because he took it as an excuse.”

Vercher came to Sac State after throwing for 7,357 yards as a 3-year starter in high school at Salesian in Los Angeles. He played in nine games as a true freshman in 2013 and completed passes against Arizona State University and UC Davis before tearing the patellar tendon in his right knee.

He missed most of the next season and said he was released by Sears after his second year.

“It wasn’t fair at all,” Vercher said. “I went through a very heavy state of depression my last season with Sac. I felt like there was no one I could talk to. They thought I was just becoming a cancer to the team when in actuality I was depressed.”

Vercher went on to play at American River College where he was the starting quarterback and passed for 2,534 yards and 23 touchdowns. He then embarked on a professional career in Serbia, where he plays now.

According to The State Hornet, quarterback Nate Ketteringham was asked to leave following the 2016 season. Ketteringham, who declined to comment for this story, is now the starting quarterback at North Dakota. On Oct. 20, Ketteringham and the Fighting Hawks will trek 1,753 miles to play at Hornet Stadium. So far this season, Ketteringham has passed for 857 yards with six touchdowns.

Linebacker Tyree Thompson left Sac State after the 2016 season after appearing in nine games. He went to play at Los Angeles Valley College in 2017 where he was ranked as the No. 1 rated inside linebacker in California by 247Sports. Thompson, who declined to comment for this story, is now a starting linebacker at UCLA.