Hornets make too many mistakes and fall to (3-5) record 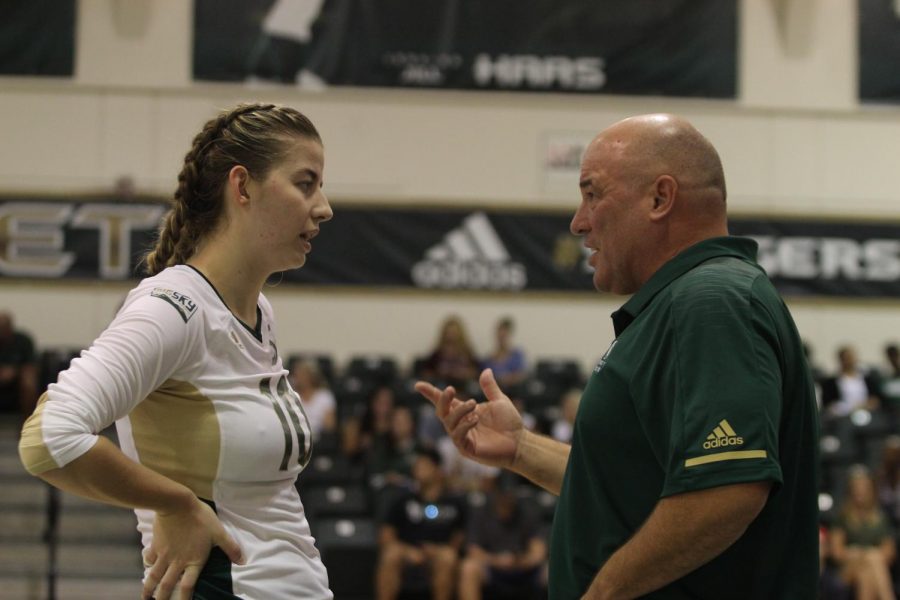 Sac State freshman setter Ashton Olin talks to head coach Ruben Volta during a timeout in the fourth set of the Hornets four-set loss to UC Davis on Tuesday at Colberg Court.

The Hornets (3-5) played three games over the weekend and failed to come out with the same energy that they would have liked to according to senior middle blocker Lana Brown.

“I just think we weren’t in it together as a team today,” Brown said. “We just didn’t have that spark. Maybe we were flustered about who we were playing, but I think all-around we could have played better as a team.”

Sac State led Game 2 at 16-13 but failed to finish strong and fell again 25-23 to go down 2-0 in the best of five match. Senior outside hitter Mikaela Nocetti said that the team didn’t have the energy it normally had to take momentum and it led to Davis overrunning them.

In Game 3, Sac State dominated from start to finish. The team went up 13-4 before taking the set 25-13. Nocetti had eight kills in the third game, including one to win the set.

The Hornets didn’t carry their momentum into Game 4 however, and the Aggies scored the first four points before winning the final set by double-digits.

The Hornets will continue their season in the Sacramento State Invitational on Friday against the University of Nevada. On Saturday, Sac State will play a double-header against UC Riverside and Seattle University.