OPINION: Jump Bike riders are polluting the streets of Sacramento

Helmetless and/or drunk idiots are ruining a good idea 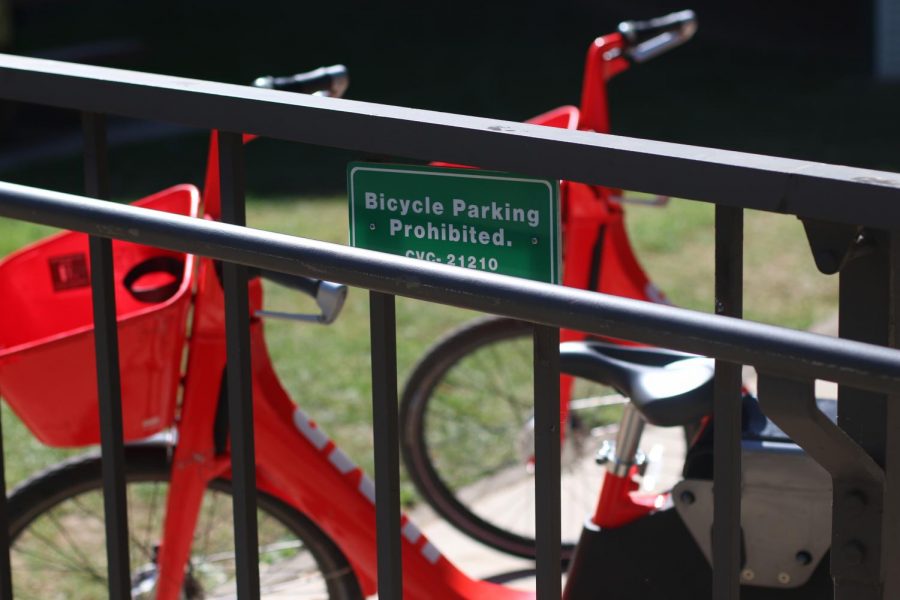 Not one but two Jump Bikes were parked in front of the Sacramento State University Library in an area that bicycle parking is prohibited. Sac State updated its wheeled device policy to account for the introduction of electric scooters in Sacramento on Tuesday.

Let’s get something established — I don’t hate Jump Bikes, I hate the people who use them.

Bros hailing from Natomas are using the motorized, candy-colored bikes emblazoned with the word “JUMP” as a fun, booze-fueled means of getting from one brewery to another, and more and more I see Sac State commuters using them to get to campus. I’m sick of it.

My life is constantly being put into danger by the people riding Uber’s new venture in shared transportation. Just the other day I was riding down J Street to get to school and a man on a Jump Bike got closer to me with every single pedal I took.

I started to sweat as the bike lane disappeared into thin air and I was left alone to fend for myself on the street. Jump Bike man — who was not wearing a helmet, I may add — got closer and closer to me as I was nervously navigating through the hectic morning commute traffic down J Street.

The man waited until the *exact* moment that a Sacramento Regional Transit bus was in the street next to us to pass me. He got so close to me that he caused me to swerve to the side of the road. The incident happened in an intersection, no less, so during my swerve I nearly hit a car at the light in addition to a parked car at the other side of the intersection.

If you take a stroll down any street in the metropolitan area of Sacramento, I guarantee that you’ll see at least one Jump Bike littered on the sidewalk with no thought as to who may be using the walkway.

Jump Bikes have been seen parked everywhere from the middle of the sidewalk to benches, the side of buildings, light posts and now…. planter boxes?

Kinda artsy looking. But prolly not where @jumpbikes are supposed to be parked. #Sacramento pic.twitter.com/O1SF2fHFqa

I have never experienced a biker leaving their bike parked in the middle of a sidewalk, much less a freaking planter box. I mean, who does that?

The problem with Jump Bike users is that they don’t know biking etiquette — because they aren’t regular bikers. More needs to be done on Uber’s part to educate riders on basic rules and safety — like maybe a suggestion to riders to wear a helmet? And don’t put other bikers (or humans) in harm’s way?

Uber also does not do anything to notify their riders at the time of rental that it is illegal to ride a bicycle while intoxicated.

According to Kraut Law Group, the word “highway” applies to any public road within the state, including sidewalks, with the exception of private roads.

I see people leaving bars and breweries in Sacramento and hopping on Jump Bikes constantly. I also hear them yelling and screaming outside of my apartment at 3 a.m. after the bars have closed.

OK, I have to admit something. I tried a Jump Bike once. I know, I know, how dare she, the Jump Bike hater herself, ride these godforsaken vehicles?

But I did it for the sake of journalism. I did it for you, dear reader. I wanted to become familiar with the way the bikes are rented. I wanted to know what, if anything, is mentioned to the renter in the way of safety and etiquette, and if the app bothers to mention that you should probably be wearing a helmet.

I now know, from experience, that there is literally no other notification in the app before a renter hops on and rides away, potentially helmetless and intoxicated.

Hear me out. I take no issue with affordable transportation, and when I heard that a ride share service for bicycles was coming to Sacramento, I had hope. I really, really had hope.

I truly hoped that that these bikes would be one remedy for the parking hell that is midtown Sacramento. I hoped that it would provide more options for those who may be affected by the lack of public transportation infrastructure in Sacramento.

But no. Inexperienced bikers and Natomas bros came and ruined everything, like they have with everything good in Sacramento: breweries, coffee shops, bars and now affordable transportation and sidewalks.