OPINION: It’s time for Herky to get some hot new looks

Let’s use our mascot to generate some off-campus buzz 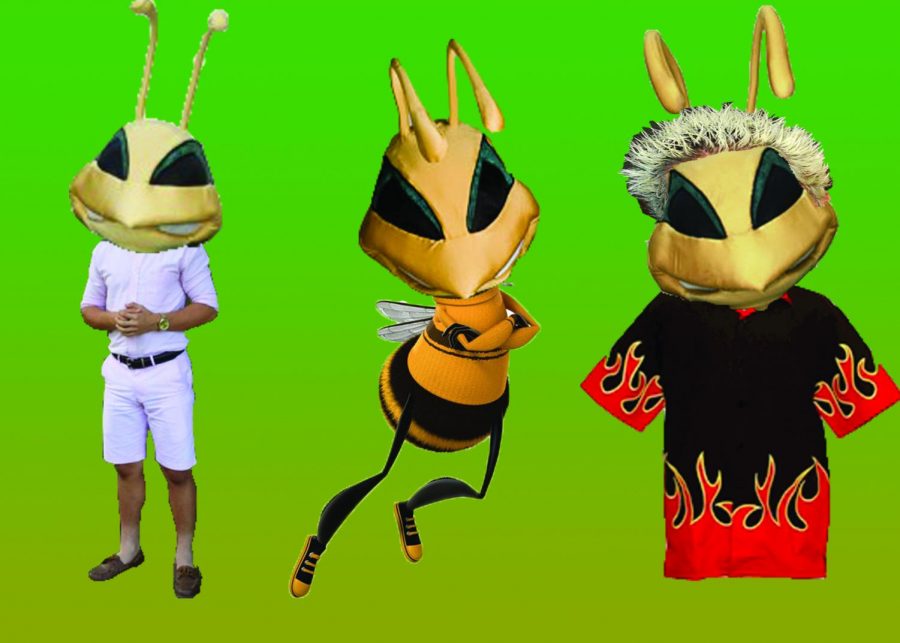 A high-tech composite image of some very serious, possible looks for Herky.

I’m happy to be a Sacramento State student. It’s true.

I’ve lived in Sacramento since my freshman year of high school, and have always liked the city. I love trees, I like my major and I think I’m where I’m supposed to be; a truly comforting feeling.

But the absolute best thing about being a Sac State student is that our mascot is a muscle-jacked bee who runs around looking like a living meme. And there are plenty of thicc memes about Herky to be had.

And while Herky, full name Hercules, is great as he is, there is always room for improvement. I think his current thiccness is ideal; any more might prove dangerous.

I just think that there needs to be a little more creativity in Herky’s wardrobe department. I even have some specific ideas.

The jerseys. The muscle tees. The tight athletic pants. I thought that was all Herky had in him until last year, when I saw him debut both a suit and army fatigues. This opened up my mind to all of the possibilities.

Now? I can’t quit thinking of potential Herky outfits. I wish he was a doll an action figure and I knew how to make tiny clothes; I’d construct them all. My initial list of ideas for this article was in the high teens after only 30 minutes of thought.

Fortunately for you I’ve narrowed it down, and with apologies to such notable ideas as Bedtime Bee, Seasonal Holiday Herky (Halloween, Thanksgiving, Christmas, etc.) and Tan Suit Obama, here are my very real and serious suggestions for the outfits Herky should don sometime this year.

Sac State President Robert Nelsen has a very specific look. While I don’t know how we can make Herky look bald, I do know we can give him a goatee, a nice suit and some wicked cowboy boots. This is an easily executable idea, but the key is the delivery.

It has to be a surprise.

Imagine it: Nelsen arrives at some random event. He seemingly goes to a million every week. He, of course, immediately sees that Herky isn’t there yet and asks where he is. Someone reassures him that Herky is on the way, just running late because of a wardrobe issue.

The issue is that Herky was waiting for the right moment before he busts open the doors and stunts on everyone, taking extra high steps to make sure everyone sees his boots. Then he walks straight up to Nelsen and does a direct comparison.

The pictures and videos would all be golden.

This one is obvious. Herky’s image, in my mind, does not need to be wrapped up in masculinity. Women have outnumbered men at Sac State for years, and it’s time to get some representation.

The easiest, most satisfying choice is the most powerful woman in the world: Beyonce.

There are almost too many angles to take here. Queen Bee? Bee-yonce? The Bey-Hive? I am honestly shocked Herky hasn’t already done this and I need it ASAP.

Go get a Herky that can dance, pick your favorite Beyonce outfit and hairdo, and reap the publicity rewards. This is perfect for a football game, where plenty of students will be ready to pull out their phones and hit record as Herky and her crew (Dance team? Cheerleaders?) run the world.

I had too many meme ideas to do them separately. Not sorry. We’ll go in order of importance.

Guy Fieri: The father of all memes. A wholesome, trash food king who attended American River College (so did I). Not only is Guy Fieri a lifestyle icon, he’s also a style icon. One flame shirt and one Flavorcrown is all you need. Maybe some shorts? I’ve never seen below his torso.

Once Herky is in full Flavortown regalia, maybe he can re-create my favorite gif of all time where Fieri eats a noodle in reverse.

Barry from “The Bee Movie”: This one is complicated. A hornet is not a bee, news flash. But I think the high meme-ability of “The Bee Movie”—one of the internet’s greatest sources for ongoing memes—makes it worth the stretch.

We get Herky dressed up like Barry, which is basically naked but with a bee-colored sweater. Herky then goes to a court of his choosing and sues humanity for something.

A good old-fashioned publicity stunt. Get Sac State’s name out there. Take that, CSU Bakersfield! We’re the meme school!

Soundcloud rapper: A truly defined aesthetic. Face tattoos, colored hair and jackets that are never quite all the way on. Even better than the look is the two-song EP Herky could put out where a bunch of buzzing sounds can be heard over that same trap beat that’s in every hit song now.

Had to do it to em: This is a fringe contender. Twitter user Lucky Luciano—just a guy who wore a nice outfit and posted it with the caption “you know I had to do it to em”—became internet famous when he posted a photo of his fresh look.

Sac State Twitter would absolutely blow up if Herky got some nice chino shorts, a matching collared shirt with loafers and a gold watch and posted it on his Instagram account. Hopefully he just doesn’t get arrested for drug possession and then post a GoFundMe where the only image is some half-sliced banana bread. Luciano did that.

Herky is an old man! What if for his next birthday he wore high-water khaki pants, suspenders and some orthopedic dress shoes? Large glasses? Hair coming out of his antennas?

Maybe he can tell current students some nice stories about Sac State’s past. How Sacramento City College’s campus was our first campus, how there used to be live chickens on campus everywhere and how the school’s founder believed in eugenics.

“Back then, sterilization was considered progressive,” Herky might say. I freely admit this one is a bad idea.

Maybe Herky could be more reflective of the rest of campus. Maybe he can play drums in the marching band or act in Shakespearean garb. I’m here for nerdy Herky, artist Herky, hipster Herky and hypebeast Herky.

Or, some realism. Let’s see him in some slide sandals and pajamas, bleary-eyed at a 9 a.m. foreign language class, trying to remember how to speak English, let alone learn French.