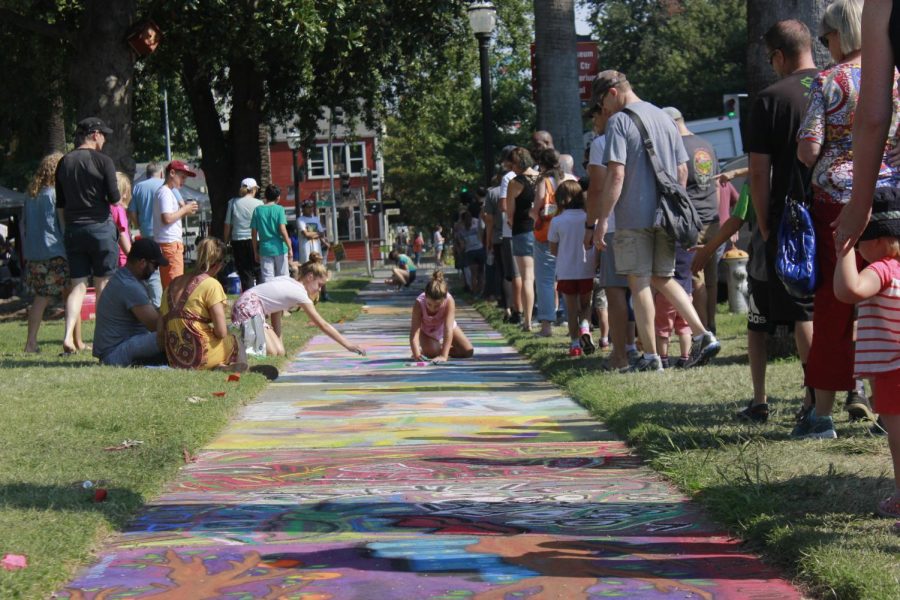 Two sisters work on their square "Bauer Babes" as attendees look on at the Chalk It Up festival that was held from Sept. 1-3.

The 28th annual Chalk It Up festival in Sacramento drew in a crowd to celebrate art and expression, specifically through  chalk artwork displayed on sidewalks.

The festival ran for three days during Labor Day weekend at Fremont Park in downtown Sacramento. According to chalkitup.org, more than 60,000 people were in attendance.

The festival offered food trucks, free coloring books for children, live music and interactive art activities for all age groups. Attendees were encouraged to vote for their favorite art squares using a QR code that was placed next to each artist’s square.

Jazz Scrivner, a Sacramento State junior, and her best friend Olivia Smith have been participating in the Chalk It Up event for nine years. Their square artwork aims to attract and cater toward children by featuring fantasy characters, like mermaids.

“We just like to inspire little kids and the best way we like to do that is with more whimsical fantasy kind of stuff,” Scrivner said.

Scrivner and Smith played off of each others differing styles in order to create their mermaid-inspired piece.

“Olivia is all about doing the lines and things, but I like doing more colorful stuff,” Scrivner said. “It can be a little bit tricky because we do have very different ideas.”

“I want everybody to respect the art,” said Adorno. “It’s how we express ourselves.”

American River College student Cristina Owens has attended Chalk It Up every year for the past 11 years. Owens recalls the children’s interactive crafts section as “definitely (her) favorite part of the festival every year.”

Owens said the children are always the best part of the festival because they’re fascinated by everything.

“Kids are the purest and most innocent,” Owens said. “They’re the reason Chalk It Up has lasted so long.”