OPINION: Beyonce and Jay-Z stop the world with “Everything Is Love” 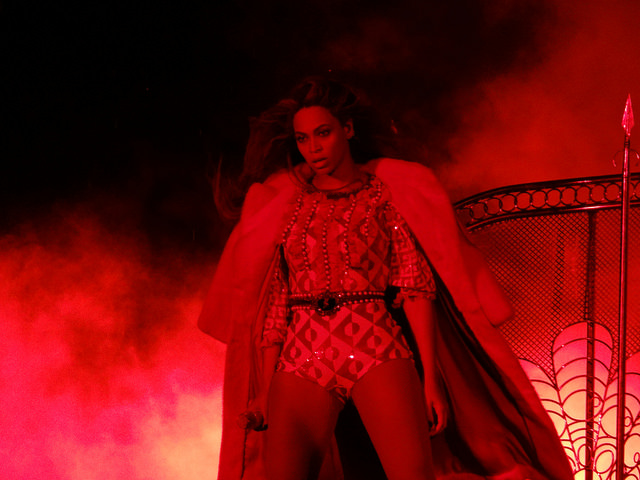 Beyonce performs during the 2016 Formation World Tour at the Carter-Finley Stadium in Raleigh, North Carolina on May 3, 2016. She and husband Jay-Z took fans by surprise with the release of their powerful and unfiltered joint album “Everything Is Love”.

Beyonce continues to leave our lives in shambles; since the surprise release of her self-titled visual album in 2013, she has refused to slow down to let devout fans process everything and catch our breath.

She and Jay-Z have made the element of surprise their No. 1 power move, keeping them a step ahead of everyone else as they remain at the top of the music world as two of the most respected artist and entertainers in the industry, both together and individually.

And it’s through the recent release of their surprise joint album “Everything Is Love” that Beyonce and Jay-Z remind us again that this is their world and we’re just mere spectators living in it. The nine track album picks up where the duo’s solo albums “Lemonade” and “4:44”  left off: divulging in the issues they’ve faced as a married couple, Jay-Z’s infidelity being the main subject and how they are continuing to work through it.

The album is a collaborative effort, but Beyonce carries most of what makes “Everything Is Love” a step above great with her transitions between singing and rapping — both of which seem to come second nature to her — flawlessly multitasking the two styles in multiple songs throughout the album.

It’s not to say Jay-Z isn’t great, but being that he’s been in the game for nearly over two decades, his best verses are far from being featured in this joint project. While they do showcase how they complement one another, overall this was one of the many key Beyonce standout moments she’s had in her career.

In the music video for “APES**T” released Saturday alongside the album, Beyonce and Jay-Z shut down The Louvre to embody an aesthetic that fits them best: regal.

Throughout the video, black women dressed in variations of nude bodysuits dance beside Beyonce to the tracks trap beat in the middle of one of the most famous museums in the world.

It’s within those scenes, along with another showing a black man getting his afro picked in front of the Mona Lisa, that you realize how carefree — and ridiculously rich — the Carters truly are.

“APES**T” sets the tone for the album, and when watching the visuals for the song before listening to “Everything Is Love,” you get a better understanding of the roles Beyonce and Jay-Z play in the delivery of the album as a whole; Beyonce matching Jay-Z bar-for-bar, if not, out-rapping him throughout it.

What sets “Everything Is Love” apart from the albums leading up to it is that Beyonce and Jay-Z don’t hold back on letting people who hate them, see them as competitors, or have betrayed them, know how they feel about them. They make it a point to not completely focus the album on their marital issues but also address what it’s like being two of the biggest names in music and acknowledging their power.

The two proudly rap about having complete ownership over the comfortable lifestyle they’ve put over a decades worth of hard work into in “BOSS” while simultaneously letting the naysayers know that they could care less about their feelings, reminding them that they hold the blueprint to what being a boss actually looks like — Beyonce raps: “My great-great grandchildren already rich/that’s a lot of brown children on your Forbes list.”

But their energy isn’t spent on the negative people they have crossed paths with. As Beyonce sings, “your friends are foes, my friends are goals/Closer than kin, our souls exposed” in the final chorus of “FRIENDS,” she and Jay-Z take the time to celebrate and recognize the people in their who have stuck by them since the start of their careers — evidently a solid inner circle since none of them spoke a word about any of the surprise projects they’ve released.

“Everything Is Love” is a satisfying finale to a personal story we thought already ended when Beyonce and Jay-Z directly addressed what their marriage has gone through beyond what the public sees in “Lemonade” and “4:44.”

Throughout the album’s closing track, “LOVEHAPPY,” listeners can hear what’s probably the most balance between the two in terms of verses shared as the couple goes back-and-forth, acknowledging the trials their relationship has faced.

One of the greatest moments on the album happens in this song as Beyonce takes a personal dig at her reality after bringing up how close Jay-Z came to ruining their marriage by cheating. She sings: “we keepin’ it real with these people, right?/Lucky I ain’t kill you when I met that b–.”

Although Beyonce and Jay-Z bring up the issues they’ve faced as a couple, they end the song and album on a more genuine and sentimental note as the lyrics change from “But love is deeper than your pain, and I believe you can change” to “We came, and we conquered, now we’re happy in love.”

All that’s left to wonder is what more can the Carters do from here? When you think they’ve done it all, they make their presence known once again, pulling out new stops and proving why people both love and hate them.