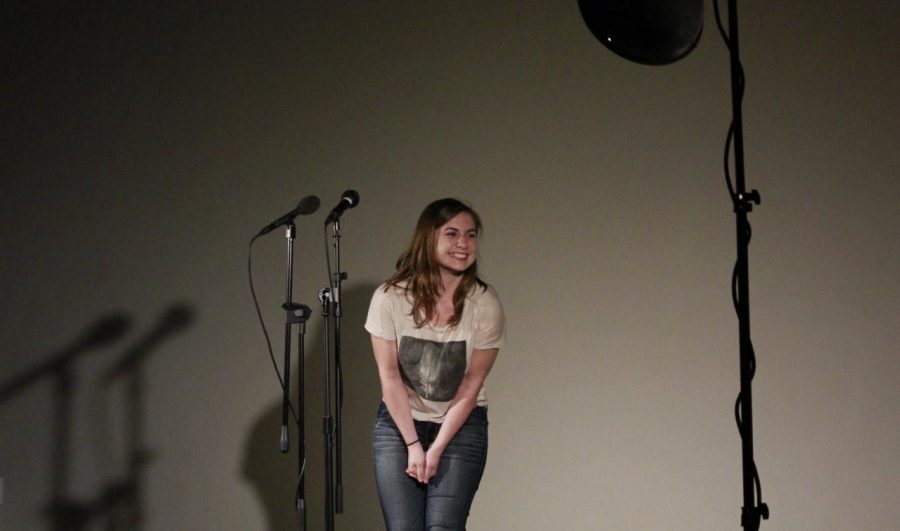 Lauren Thompson, a deaf studies student at Sacramento State, tells the romantic meeting of an old friend at Capital Storytelling, an event co-sponsored by Sac State and The Verge Center for the Arts, on Thursday, April 26, 2018. “Storytelling is just a great part of society that’s happened for thousands of years, that’s carried on in a modern day context,” Thompson said in an interview.

Six speakers from the Sacramento community told real-life stories at Capital Storytelling, an event organized by Sacramento State and hosted at the Verge Center for the Arts.

The event, held on Thursday night, was the culmination of a three-week workshop series at Sac State, where the speakers honed stories into fully-developed performances.

Professor Lisa Cantrell coordinated the workshops, the performance, deaf interpretation for each story, and plans to make this a quarterly event in Sacramento.

The second workshop series starts in September, with another live performance planned in the fall.

All six speakers said the workshops were beneficial to them.

One of the performers, Shahera Hyatt, is a Sac State alumna who graduated with her master’s degree in social work.

Hyatt described her experience with the workshops.

“I probably came in with three or four minutes of a story, and the group asked me questions they were interested in, told me what they wanted to know more about, and just by talking out loud I was able to find parallels in the story that I had never considered before,” she said. “So (the workshop) really helped me to develop my narrative.”

Another one of the performers, Barbara Munn, is a geology professor at Sac State. She said the workshops were an amazing experience.

“When you do it you feel like you’re being listened to, completely listened to, and it also leads you to examine how moments in your life — what they really mean to you,” Munn said.

Suzi Byrd, an administrative support coordinator for the department of public policy and administration at Sac State, was also a speaker at the event.

Byrd said she was “double uncomfortable” the day of her performance, because her discomfort with public speaking was compounded by her choice to choose a deeply emotional story.

She said she compensated by preparing for the event and bringing her support network.

“I practiced tonight, and I have my family with me,” Byrd said. “I brought my village with me.”

Kevin McLean, a postdoctoral scholar at UC Davis studying anthropology, decided to tell the story of the first research trip he took to a remote location.

“When it’s stories about your own life, you kind of have to think back, and think about what you got out of it and what you learned, ‘cause that stuff’s not always clear in the moment,” McLean said in an interview.

McLean said the group came into the workshop with the base nugget of a story, but from there he said it took “extra thinking and digging to figure out what exactly we learned” out of each of their experiences.

Cantrell, who organized the event, said there’s only one change she’ll be making for the next event.

“I’m not gonna host it next time,” she said.

Cantrell said she would rather help other people get on stage than go on stage herself.

“What I really love is that some of the storytellers tonight emailed me saying, ‘I’m so nervous,’ and I’d be like, ‘Don’t be nervous, you’ve practiced your story like 20 times.’ ”