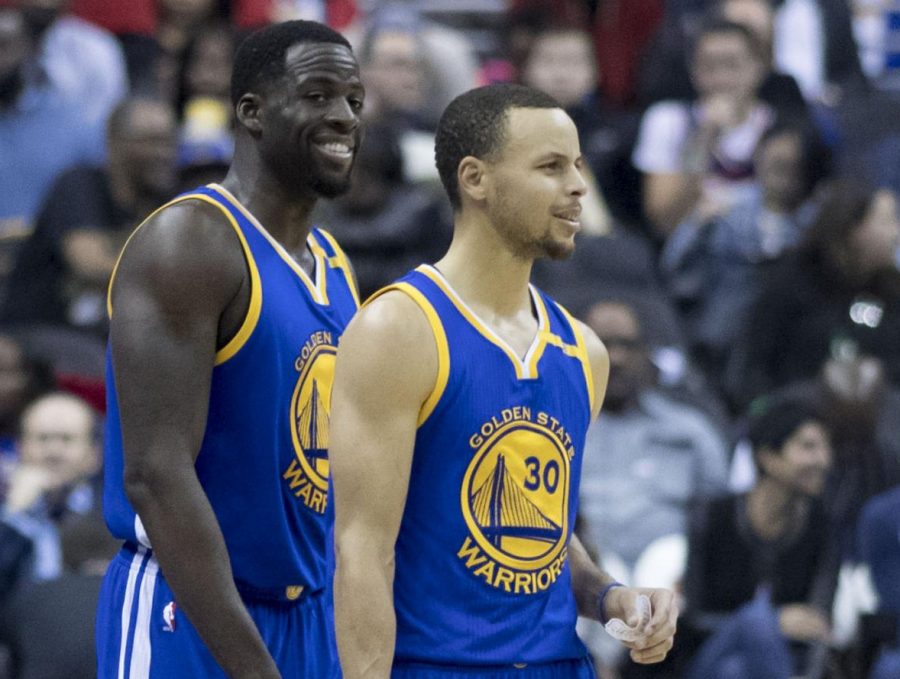 Steph Curry and Draymond Green of the Golden State Warriors come onto the floor of Capital One Arena in Washington, D.C. on Feb. 28, 2017. Curry, Green, and the rest of the Warriors have built up a substantial bandwagon fan base with their success.

As the 2018 NBA playoffs continue, a group of hibernating Golden State Warriors fans are climbing out of their caves and back online to voice their tritely exaggerated support for Steph Curry and friends.

When you’re a Kings fan but Steph’s in the building 😂 pic.twitter.com/5GYAj5gTPN

I was born and raised in Pittsburgh, Pennsylvania, so the Steelers, Pirates and Penguins are my teams. After three Super Bowl appearances in seven years, back-to-back Stanley Cups, and 20 straight losing baseball seasons, the difference between a bandwagon fan and a true die-hard becomes obvious.

With many Sac State students coming from the Bay Area and the recent success of the NBA team that calls Oakland home, it’s not surprising to see as many Dubs fans as I do, and there’s nothing wrong with backing the team from your region or the team you’ve rooted for your whole life.

I just ask that you do it all the time instead of pretending that’s the case.

I understand it can be difficult to stay loyal to a professional team that continuously makes you feel like you’re wasting your time and words of encouragement — yes, I’m looking at you, Kings.

But does integrity mean nothing?

The levity of professional sports becomes lost on many onlookers, and it doesn’t surprise me that many feel inadequate rooting for a team that’s less than amazing. But what do you serve to gain from pretending to love the winners?

The team gets the trophy. You just get false satisfaction.

There’s nothing wrong with respecting Golden State’s talent. The way the Warriors effectively checkmated old-school basketball strategies and introduced a new wave of manipulating defenses remains impressive, but recognizing that does not back-up the “#DubNation” in your Twitter profile.

The real sufferers from the bandwagon disease are the real Golden State Warriors fans: the ones who saw the torch pass when the former All-Star David Lee got formally benched for Draymond Green.

And the ones that had to defend taking the undersized, positionless guard from the tiny Davidson College.

And, dare I say, the ones that actually got to celebrate when Baron Davis and Stephen Jackson — that’s STEVE-n, for the record — overwhelmed Dirk Nowitzki and the one-seeded Mavericks over a decade ago.

The real ones who put in the time, waiting for this stretch of excellence to hit have to watch you cut to the front of the line.

In all sports, competitive nature creates the beautiful moments of joy, passion, heartbreak and dedication that draws in crowds. For spectators, it is that same fire that lets us connect with the teams we’re rooting for and juxtapose ourselves from everybody else.

If you’re just hopping on Steve Kerr’s coattails because you want to see a win and have no clue who Andris Biedrins is, you’re undermining the purpose of rooting for a specific team.

Most of the pseudo-fans will likely keep up the facade until the reigning NBA champions are dethroned, subsequently abandoning ship, but I ask for a much simpler future.

Your basketball fandom sins will be forgiven if you merely continue to follow, but really follow, the Warriors after they inevitably fall from stardom.

If it took unprecedented domination by Golden State to get you into the world of the NBA, that’s cool with me. But there’s a lot more fun to be had than just celebrating victory in this domain. Pull up a chair and stick around for a while.

If you’re only here for the bragging rights, though, go back to sleep.