Sleep, study, or socialize — as long as you’re doing it in a hammock 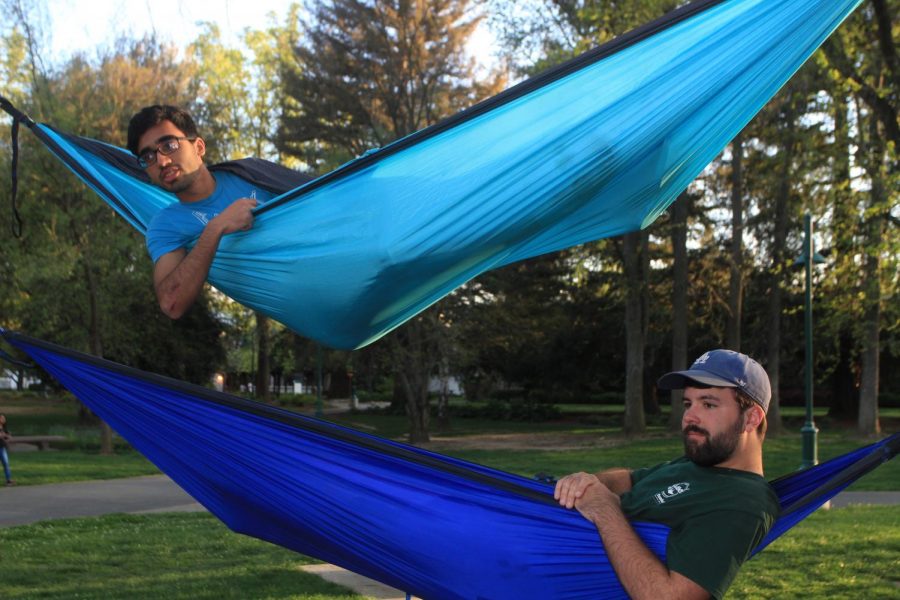 Computer science major Armaiz Adenwala, top, and business finance major and Hammock Club President Trent Simonson, bottom, engage with other members of Hammock Club at a Monday evening meeting on April 2, 2018 in grouping of trees between Riverfront Center, Lassen Hall and the bus stop. Hammock Club meetings are held Monday and Thursday evenings, and are open to all students.

With all the shady trees blooming on the Sacramento State campus, the members of the Hammock Club are taking in the scenery. Its members can be spotted on Monday and Thursday evenings from 5 to 7 p.m. in between Riverfront Center and Lassen Hall, near the bus stop.

This club was founded two years ago to build community among students. It started with just some friends hanging out in hammocks, but now the club organizes trips for its members featuring hikes and camping. There’s even a hike planned with Peak Adventures later in April.

Their hope for the club is that it will serve as an invitation for others to come relax. Hammock Club Secretary Jess Long described what the club is like.

“You come hang out about once or twice a week, or whatever, and you’re just around people who want to have a good time,” she said.

There are no requirements for this club, other than, perhaps, a love for the outdoors. 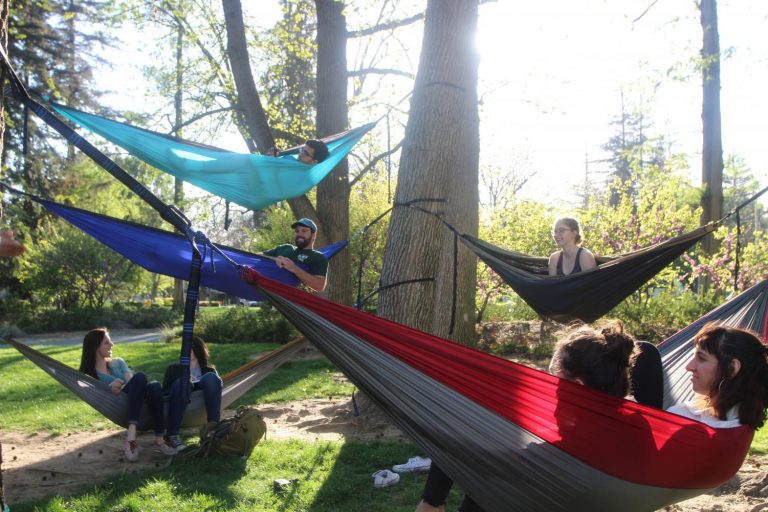 Tessa DeVere – The State Hornet Hammock Club members and non-members alike gather for a Monday evening meeting on April 2, 2018 in grouping of trees between Riverfront Center, Lassen Hall and the bus stop. Meetings are open for all students who want to join.

There are no dues and no mandatory attendance. You don’t even need a hammock; the club usually has extras.

“You don’t need a hammock, you don’t need to know anyone,” Sosken said, explaining that anyone can join the club.

President Trent Simonson said the best place on campus to hammock is simply anywhere there are two trees a good distance apart.

He said the club aims to promote a “stress-free environment.”

“If you want to nap, come set up your hammock and take a nap,” he said. “If you want to do some homework, that’s no problem, just do your homework. Otherwise you can socialize and hang out with others that enjoy hammocking.”