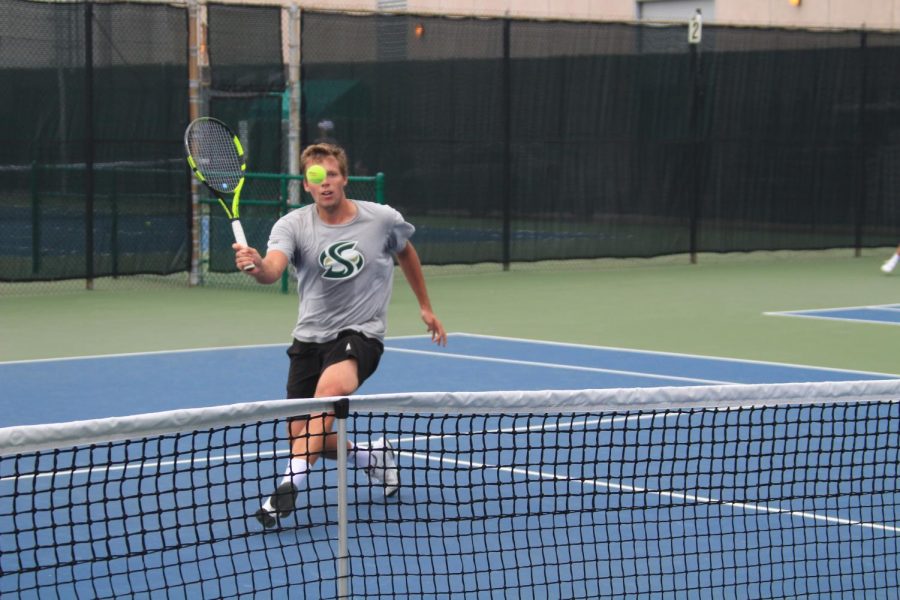 Sacramento State junior Mikus Losbergs goes for a volley during his No. 1 singles match against UC Davis at the Sacramento State Courts on Wednesday, April 11, 2018. The Hornets defeated UC Davis 4-3.

The Sacramento State men’s tennis team defeated UC Davis for the first time in four years by a score of 4-3 on Wednesday.

The Hornets (6-12, 5-4 Big Sky Conference) started of the day trailing 0-1 because they lost two out of the three doubles matches at the Sacramento State Courts.

Juniors Dom Miller and Donald Hall lost (2-6) the No. 2 match and sophomores Louis Chabot and Hermont Legaspi fell (2-6) in the No. 3 match. Junior Mikus Losbergs and senior Kasparas Zemaitelis did not finish their match.

After the doubles matches, Sac State had cause for celebration after Zemaitelis won (6-2, 6-1) his No. 2 match on senior day.

“It’s been a good experience (playing for Sac State),” Zemaitelis said. “I loved it. We traveled a lot. The team chemistry from freshman year to senior year was unbelievable. (This) is like my second family.”

“I felt tired, but in the second set I felt like I could definitely win the match,” Chabut said. “With everybody around the court supporting me it was amazing. It helped me so much, and I ended up winning this match playing really well in the third set.”

Sac State coach Kevin Kurtz said he was pleased with Chabut’s performance and thought the third set was the best set Chabut has ever played.

“It was senior day, so for us to get a win like this during senior day was pretty impressive,” Kurtz said. “We lost the doubles point, but the captain (Losbergs) said ‘Hey we was lost (the doubles point to Weber State) last year, but we came back and won the match.’ So everybody was like let’s do this.”