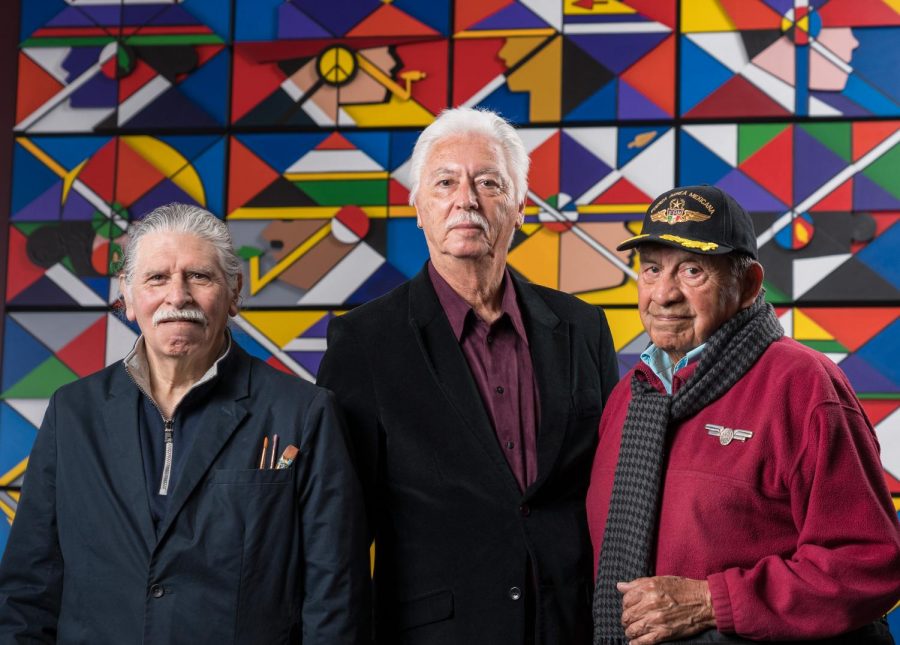 RCAF members Juanishi Orosco, left, Stan Padilla, and Esteban Villa pose in front of the lower panel of their mural.

Members of the Royal Chicano Air Force art collective will be discussing their mural “Flight” during a presentation on May 3 at 6:30 p.m. in Mendocino Hall.

“Flight” was the latest major art display to be installed at the Golden 1 Center and was created as a celebration of Mexican and Chicano culture.

The Royal Chicano Air Force, or RCAF, was founded in 1968 by Esteban Villa, Jose Montoya and Juan Carrillo, and has a focus on increasing cultural awareness by promoting Chicano heritage through art.

“Flight” symbolizes the migration and evolution of the Chicano experience. According to Orosco, each section of the mural represents a different change.

“The three aspects of this mural represents that evolution,” he said.

Orosco explained that the Sixth Sun represents a new era. The top panel, which he created, symbolizes the two cosmic figures, Fire and Water, and the union of opposites.

Padilla is a master artist who decided 30 years ago to make a difference by putting his creativity into communities.

“We have taken our technical skills, knowledge to a heightened level to address our times and the arc of history,” Padilla said. “We have applied what we have learned as an arts collective in the past to a larger social context.”

He also said the group tries to teach people about Chicano culture and Latinos’ place in history.

Esteban Villa’s sons — Renee Villa and Nathan Villa — were two of the assistants.

“The most valuable lesson I’ve learned on this project from my father is that everyone should take time to be creative,” he said. “Whether it’s painting or drawing or dancing or writing or cooking or sculpting — be creative.”

His brother Renee Villa also recognized the privilege to work with his father and embraced the fact his father helped him find his passion.

“Everyone should have a passion in life, maybe art or science, but you have to find your passion because it makes life worth living,” Renee said. “My father had the passion to create art since he was a kid. It made me think do I have that same passion? (The) more I work with him, I realize I have it too. For generations they will view and ask what it meant.”

“Flight” can be seen inside the northern entrance of the Golden 1 Center.