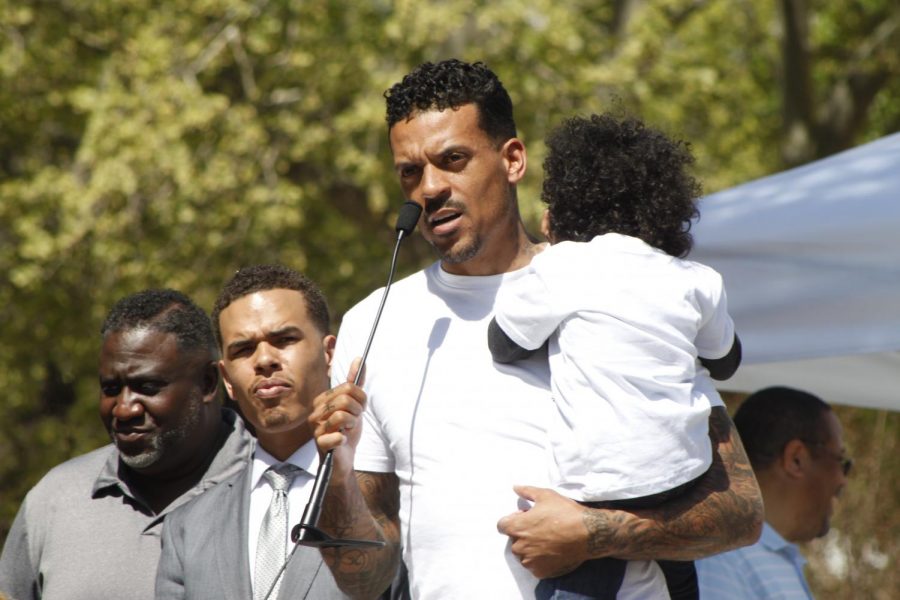 Former Sacramento Kings player Matt Barnes holds one of the children of Stephon Clark, who was recently shot and killed by police, during the March and Rally for Action on March 31, 2018. Barnes created the event to spread awareness of the shooting and preach change.

Dominique Walker and Will Coburn

Leaders from Sacramento and the National Action Network, along with the families of Stephon Clark and Joseph Mann, were at Cesar E. Chavez Plaza speaking about long-term goals and policy demands on Saturday at a protest led by former Sacramento Kings forward Matt Barnes.

Stephon Clark was killed on March 18 in his grandmother’s backyard by police; Mann was killed during an altercation with police on July 11, 2016.

“It’s something that needs to be talked about and I think people with bigger platforms such as myself should be doing this,” Barnes said. “This is a worldwide situation and this is something we are not going to allow to be dismissed.”

Barnes announced that with the Kings’ help he was creating a scholarship for Clark’s children, Aiden and Ciaro.

The initial plan is to ensure that Clark’s children, who were in attendance, can get all the funding for a college education.

“I’m working with the team though to take this nationally, not just for them because this is a nationwide problem,” Barnes said.

Barnes said he feels he is uniquely situated to work as a community leader, and said he can work with city and “gang leaders.”

Matt Barnes speaking at a rally in Sacramento pic.twitter.com/JBpquLPWx3

Protester and father Chris Adams fears for his son because of police brutality.

“This is happening everywhere,” said protester and Sacramento State business administration senior, Arick Holts. “This isn’t just happening in Sacramento. This theme of being shot illicitly for doing nothing because the color of your skin should be able to stop.”

The Rev. Shane Harris from the National Action Network led events and laid out the goals of the event, which he said are to continue Clark’s dream of being a good father, to convict the officers that shot Clark and to put direct pressure on Sacramento Police Department to change its foot-pursuit policies.

“Today we come unified to say that the killing of black and brown men in America is the new lynching and we come to shut it down,” Harris said.

Speakers also called for better mental health care policies. Mann was shot by police after 911 calls about his erratic behavior in public.

Speakers also brought up Clark’s brother, Stevante, whose public behavior has drawn criticism, saying he was diagnosed with post-traumatic stress disorder after his older brother was also a victim of gun violence.

“We need a resource center. Where are the mental health professionals,” said family friend Jamilia Land. “He needs help.”

Stevante was at the plaza before the event began but became agitated as crowds flocked around Barnes calling the event a photo-op.

The demonstration came about a week of protests in downtown Sacramento that have shut down both the I-5 freeway and the Golden 1 Center, forcing a majority of fans to leave the area without entering the game because the doors were blocked.