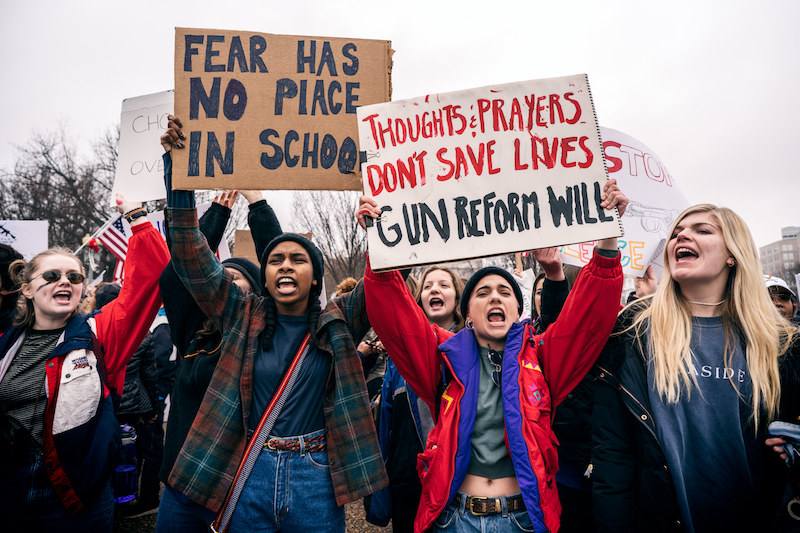 Students participate in a February demonstration in Washington in the wake of the school shooting in Florida. Members of the Sacramento State community will be participating in anti-gun rallies later this month.

Some Sacramento State faculty and students are rallying at the State Capitol in a pair of demonstrations to be held later this month against gun violence in the aftermath of the Feb. 14 school shooting in Parkland, Florida that left 17 dead and 14 injured.

A March 14 rally is set to coincide with the one-month anniversary of the shooting and a nationwide walkout of classes.

On March 24 a second rally, the March for Our Lives, will coincide with a national march in Washington.

Margarita Berta-Avila, a professor of education and the chapter president of the California Faculty Association at Sac State said she will be attending the March 14 rally and that the association has endorsed the walkouts.

“This is a reflection of students finding and identifying the strengths they have united,” Berta-Avila said.

Kevin Corona, president of the College Democrats at Sac State, said that his club is planning on going as a group to the March 24 rally and encourages students to attend both events.

Annie Adams, co-chair of the Women’s March Sacramento, is organizing the March 14 rally at the Capitol. The Women’s March organization is expecting 500-1,000 people at the rally but isn’t estimating how many people will participate in the walkouts, saying that most organization is being done on the personal level over social media.

Associated Students, Inc. President Mia Kagianas said ASI has yet to take a stance on the walkouts.

“(It’s a) developing issue,” Kagianas said. “We’re going to take some time to see what’s possible and what students want to see.”

Kagianas said she had seen people talking about the walkouts on social media.

“With these big issues on campus, student groups host events, like the moment of healing, but we’ve seen this hit on a more personal level,” Kagianas said.

Kagianas said that if a faculty member conducts a walkout, then they should create a time for students to make up for that opportunity to get education.

Sacramento State Police expect no problems with the walkout, according to the department.

Adams said that the walkout and rallies are meant to call attention to the influence of guns in American life and law.

“It’s a call to do more about the gun violence that plagues our schools,” she said. “It’s a call to attention of the gun lobby’s sway over our legislators.”

Adams said that the Women’s March organization has created resources available for teachers on its website to work the walkouts into lesson plans.

“We’re working with a group of teachers to design a curriculum that will be grade and age appropriate,” Adams said.

Adams said in California there are more targeted goals with the walkout and rally, such as gathering new research and data on gun violence.

“(U.C.) Davis has the first publicly-funded research facility investigating gun violence,” Adams said. “It’s insanity, and how awful that this is the first. It’s shocking that we have not done more to research gun violence.”

Corona advised students interested in participating in the walkout or one of the rallies to stay educated on gun-related issues, including suicide and domestic violence.