Sac State sophomore pitcher continues to bring in the accolades 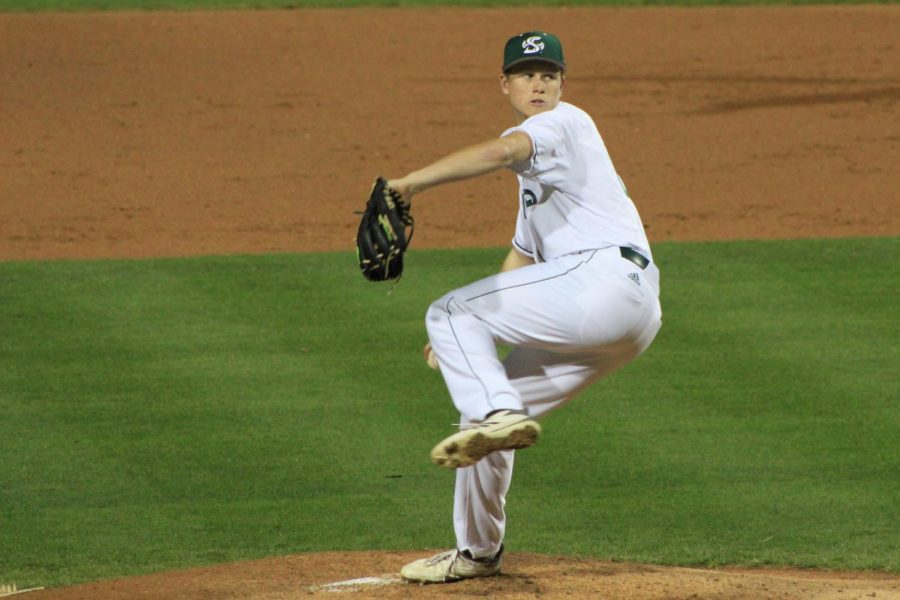 Sacramento State sophomore pitcher Parker Brahms’ hard work is paying off as he has been dominant and made an impression on major league scouts this season.

Brahms put himself on the map nationally as a freshman after earning several accolades including Collegiate Baseball Freshman All-American, Western Athletic Conference freshman of the year and making it on the all-WAC first team last year.

“He was outstanding as a freshman and he continues to get better,” said Sac State coach Reggie Christiansen. “He’s an extremely hard worker and a humble kid.”

Brahms had an 8-4 overall record and a 3.13 earned run average in 97.2 innings pitched last season. He led his team and the entire WAC in wins and was second in the conference in WHIP (walks plus hits per inning pitched) and ERA.

“Coming in as a freshman, you don’t know what to expect and they tell you what to do, but you haven’t been there yet,” Brahms said. “Coming in for my sophomore campaign, I knew what to look for and training wise, my conditioning was a lot better.”

The hard work seems to have payed off as Brahms has started five games and pitched 28 innings without giving up an earned run as a sophomore.

It wasn’t until Saturday against Santa Clara University that an opposing team even scored a run while he was on the mound. Santa Clara scored two unearned runs against him due to a hit-by-pitch and a throwing error by sophomore shortstop Josh Urps.

“He goes out there, throws strikes and gets the job done every time, it’s pretty impressive,” said Sac State senior pitcher Austin Root.

Brahms has only given up a total of three walks on the season while striking out 38 batters, including 12 strikeouts on Saturday in seven innings of work. His walk-to-strikeout ratio has also improved as last season he walked a total of 26 batters with 63 strikeouts in 97.2 innings pitched.

“The man is a stud; he knows where every single pitch is going and it shows when he’s out on the mound,” said Sac State freshman catcher Dylan McPhillips. “(Brahms is) a dominant pitcher who knows what he’s doing and is confident in knowing he’s better than everyone he faces.”

Brahms has a three-pitch arsenal at his disposal including a fastball, changeup and a breaking ball. He said he enjoys locating his fastball but has changed his grip on his changeup which has made it his new favorite pitch to throw.

“He throws all three of those pitches out of the same slot, and it makes it very difficult for the hitter to see whether if it’s a fastball, changeup or breaking ball,” Christiansen said. “Very unique short-arm action and the ball just kinda gets on hitters.”

With the help of these pitches, Brahms earned WAC Pitcher of the Week honors for the second time in his career on March 7. He earned the accolade following a dominant win against the University of Milwaukee where he pitched seven shutout innings with seven strikeouts and only allowed one walk on March 3.

Christiansen said he sees a bright future ahead for Brahms if he continues to excel and get better each year.

“As a sophomore, he really has a chance to be a pretty good (MLB) draft pick next year, if he continues this trend,” Christiansen said.