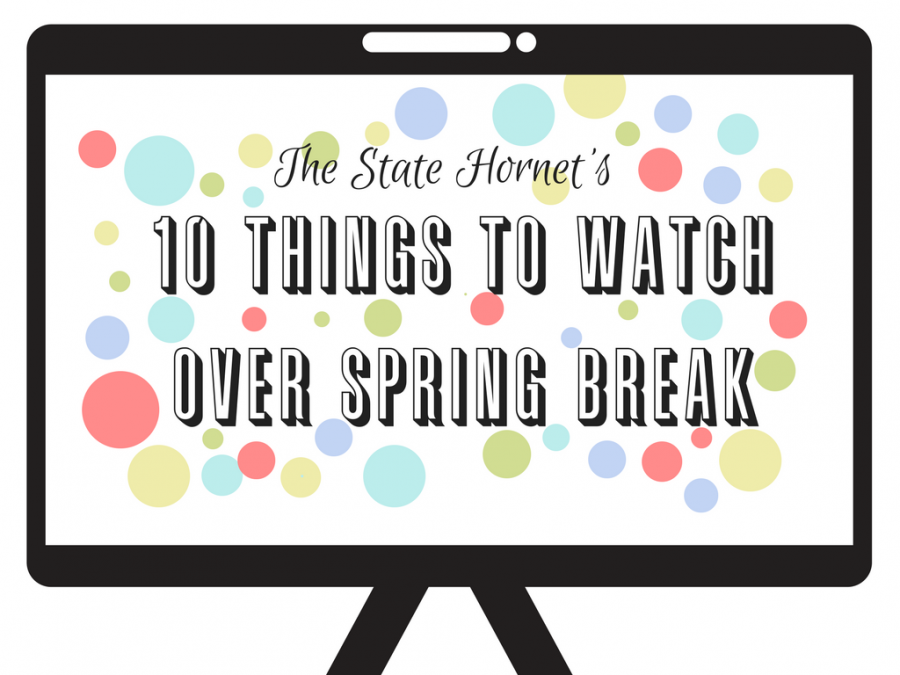 Will Moon - The State Hornet

Whether you’re planning on seeking out new activities and adventures here in Sacramento or traveling to a nearby city for a change of pace, you’ll hopefully end up with some downtime at home this spring break.

You could spend this time studying or getting ready for the next week — but, let’s be honest, chances are you won’t.

The editors at The State Hornet have put together a list of some of our favorite shows (and a movie trilogy) to binge through while you wait for that essay that’s due after spring break to write itself.

Publicly admitting this may not be the best idea, but I wasn’t really a fan of Donald Glover until only a few month ago. I didn’t care about him. I never quite got into his flow when I would listen to his music, and Troy, the character he portrayed in “Community,” was consistently the most forgettable of the main characters.

But thanks to “Atlanta,” a series written by and starring Glover, I finally see what everyone else has for years.

On the surface, “Atlanta” looks like a typical comedy-drama, but it’s a lot more than your run-of-the-mill comedy series.

The story follows Earnest “Earn” Marks (Donald Glover) just as he comes to the realization that he’s desperately broke and needs to make drastic changes in his life if he ever hopes to have the means to enjoy it and provide for his daughter.

He essentially asserts himself as the manager of his cousin Paper Boi’s (Brian Tyree Henry) rap career just as it starts to gain traction. The two of them, along with their friend Darius (Lakeith Stanfield), set off to make a name for themselves in the Atlanta rap game and while navigating through a slightly altered, and in some cases surreal, version of Atlanta.

New episodes of “Atlanta” are on FX on Thursdays at 10pm, but the first season is available on Hulu and can be purchased by episode or season on Google Play, iTunes and Amazon Video.

Coming off of its major coup of a first season — which dramatized the trial of O.J Simpson — the second season of true-crime drama “American Crime Story” focuses on serial killer Andrew Cunanan and his most famous victim, Italian fashion designer Gianni Versace.

Darren Criss’ portrayal of Cunanan — who killed five people, mostly gay men, in a cross-country killing spree in 1997 — is a spot-on characterization of a man so enraptured with acquiring money and notoriety that he has become alienated from his own humanity.

Along the way, the show spends time focusing on issues that have predominantly affected the gay community through the eyes of the show’s characters. Issues include the former ban on openly LGBTQ soldiers, the American HIV pandemic and coming out of the closet in an often-hostile society.

New episodes of “American Crime Story: The Assassination of Gianni Versace” are on FX every Wednesday at 10 p.m., but the previous episodes of this season are available for $2.99 each on Amazon.com — and while you’re there, don’t forget to check out the phenomenal first season about O.J.

This spring break, you can travel the world without ever having to leave your seat.

I promise, “Planet Earth II” will blow any nature documentary you’ve ever seen out of the water.

I never thought the original “Planet Earth” could be topped, but over ten years later, here we are. With jaw-dropping footage of wildlife and landscapes, stunning imagery, and captivating storylines, this documentary series will change your view of the world as you know it.

Available on Netlfix, “Planet Earth II” is spread across five episodes, following life on earth in six separate habitats: islands, mountains, jungles, deserts, grasslands and cities. Each episode dives into life and its willpower to survive, truly allowing the drama of nature to speak for itself.

Prepare yourself to be emotionally invested in the lives of snow leopards and baby sea turtles. Don’t be surprised if you find yourself screaming for a marine iguana or two. The images are breathtaking and at times unbelievable, and expert narration by the legendary David Attenborough feels like listening to your grandfather tell stories at the foot of his easy chair.

Believe me when I say that “Planet Earth II” is so amazing it actually made me cry a little bit — OK, a lot — but this show is so genuinely thrilling, eye-opening and incredible on all counts that the emotional rollercoaster is totally worth it.

Documentaries as awe-inspiring as this don’t come about very often. “Planet Earth II” is, at its core, the ultimate celebration of life.

Approximately nine hours later you’ll have watched some of the greatest American-made films of all time and you won’t even be mad that I just recommended a movie series to you when this list is full of TV shows.

If you don’t know already, “The Godfather” trilogy is a collection of three crime-drama films directed by Francis Ford Coppola. The movies — which center around the fictional Corleone crime family from the 1900s to the 1980s — take you through betrayal, revenge and murder. Come for the blood, but stay for the amazing performances by actors Marlon Brando, Al Pacino, James Caan, Robert Duvall and Talia Shire.

Haven’t seen it? Binge it. Already seen it? Watch it again. Read the books and absorbed the films a countless amount of times? Me too — let’s be friends.

I almost passed on this show after seeing the two minute long teaser for this series blow up on Facebook — mostly because I thought it was a joke. I thought that Netflix could not possibly make a full series about a high schooler drawing phallic symbols on cars, but when I saw it on my Netflix homepage, I couldn’t resist but click watch.

What I originally imagined to be a lame, class-clown style comedy that I’d let drone on in the background of whatever other activity I was doing actually turned out to be a brilliantly hilarious mockumentary mimicking the podcast “Serial,” which is one of my favorites.

Jimmy Tatro plays Dylan Maxwell, who is accused of spray painting penises on his high school teacher’s cars. Peter Maldonado, one of Dylan’s classmates, makes it his personal mission to investigate and document who actually committed the crime. Everything about Peter — from his relationship to his subject Dylan all the way down to the tone of his voice — is a perfect reflection of “Serial” host Sarah Koenig.

Peter’s intense attention to every detail of the crime is really what makes this show hilarious — he spends a significant part of the first episode analyzing the way Dylan draws penises in comparison to the ones found on the car. “American Vandal” a perfect light-hearted spring break binge — even if you don’t like penis jokes.

“American Vandal” has eight episodes and is available on Netflix.

Brilliantly adapted from a graphic novel by Charles Forsman, ‘The End of the F***ing World’ is just your typical boy meets girl, boy wants to murder girl, boy and girl end up on the run from the law escapade.

The show takes a bold gamble by presenting the audience with two immediately loathsome main characters — our protagonist, James, is a self-diagnosed psychopath in the midst of working his way up from slaughtering his neighbor’s pets to killing a human, while his girlfriend, Alyssa, is a nightmare version of the manic pixie dream girl trope — a brash, obnoxious teenage girl seemingly hell-bent on offending everyone who crosses her path.

But brilliant editing and clever, punchy writing keeps you invested throughout the duo’s development — and by the end, you’ll be grateful you stuck around for the rare, deeply satisfying cliffhanger ending.

With the entire series encapsulated in just eight 20-minute episodes, ‘The End of the F***ing World’ easily tops the list for most binge-able spring break entertainment.

‘The End of the F***ing World’ is available on Netflix.

Yes, he IS that good.

This show pushes you into exploring the psyche of England’s most hardened gangsters as they struggle with morality, ambition, power, drugs, PTSD, passion and the law, all while incorporating topical historical events within the timeline its set in, between the world wars.

This series has the ability to make your insides ache with anticipation from the tension and release of its seemingly effortless rhythm. This show will catch you off guard with its brash action and tender meaningfulness if you let yourself get lost in its story.

The actors’ accents are hypnotizing and authentic, so you may want to consider watching with the captions on.

The first four seasons of “Peaky Blinders” is available on Netflix, with the fourth introducing a brilliant new character played by “Game of Thrones” actor Aidan Gillen.

If you’re looking for an honest, unpredictable comedy filled with memorable one-liners and pop culture references, “Chewing Gum” should be your next TV binge.

Set in London, England, this British show follows 24-year old Tracey Gordon — played by Michaela Coel, who also wrote and created the quirky sitcom. Gordon is a convenience store assistant who lives in an affordable housing complex with her evangelical mother and sister.

Tracey is shy, chaste, deals with frequent and inconvenient nose bleeds, and has fantasies about her celebrity crush, Jay-Z. After years of a sheltered lifestyle, the leading character wants to broaden her worldview and lose her virginity.

Complete with an ensemble of supporting characters, this raunchy, binge-worthy comedy has robust rewatchability. The first and second season aired in the UK in 2015 and 2017, respectively, and both are available to stream on Netflix now.

“Arrested Development” holds a deep place in my heart for how it is written, crafted and executed.

The show is a lot like the Bluth family itself, so tightly wound that it is constantly on the verge of breaking. Unlike the Bluths, the show never does.

Well, until the new season. But we’ll get back to that.

The show centers around Jason Bateman as Michael Bluth, the only smart, hard-working child of Lucille and George Bluth. Wealthy off of shoddy real-estate and chocolate-dipped bananas, the rest of the family is a hapless mess: Michael’s siblings are a sham-philanthropist, a terrible magician and Buster, who is just … Buster.

George, the magnate of the family, goes to prison in the first episode, leaving the family members to pick up the pieces and scrounge for every dollar they can find. Almost everything they do goes wrong.

This all sounds rather boilerplate, but then you bring in the Korean adopted-son-turned-spy,  Lucille Two, someone’s hand is bitten off by a seal, and repeated, failed attempts at a chicken dance, and … you get probably the best bingeing experience Netflix can offer.

If you have never seen the show, do yourself a favor and stream it on Netflix now. If you have already, go back and watch again, keeping an eye out for all the clues that the show offers as to what will happen in the future. They are constant and make the show more interactive for a viewer than any other comedy to date.

And yeah, the Netflix original season isn’t great. The Bluths don’t work well together, but they don’t work at all when separated. Here’s hoping the fifth season, if it happens, figures that out.

“30 for 30” is an ESPN documentary series that began in 2009. The series focuses on interesting and intriguing sports topics.

Recently, the series dove into the relationship between Bill Belichick and Bill Parcells in “The Two Bills,” during their time with the New York Giants 1980s and early 1990s.

Recently, they aired an episode on the NFL replacement players from 1987. It was an intriguing story about how the “scab” players, as they were called, didn’t receive Super Bowl rings even though they helped the Washington Redskins win three games on the way to a victory in Super Bowl XXII.