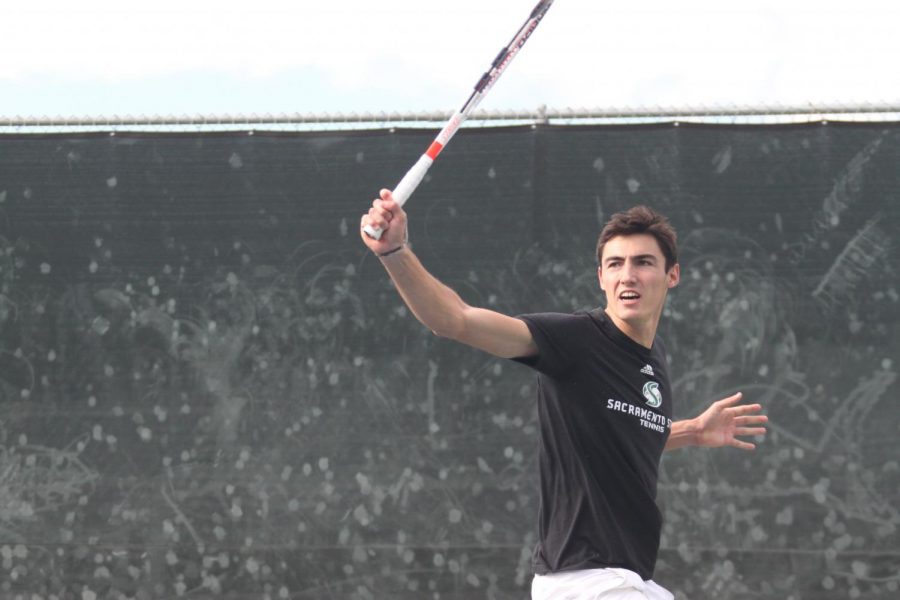 The men’s tennis team lost to the Nevada Wolf Pack 5-2 on Sunday afternoon at the Sacramento State Courts.

The Hornets (1-5, 1-1 Big Sky Conference) started their day by losing two out of the three doubles matches en route to a quick 1-0 deficit. The No. 1 team of junior Mikus Losbergs and senior Kasparas Zemaitelis went head-to-head with their Nevada opponents, but ended up losing 7-6.

“I cannot be upset with the team’s performance,” Sac State coach Kevin Kurtz said. “It was good tennis.”

The No. 2 team of sophomore Hermont Legaspi and junior Bernardo Moraes also lost their doubles match 6-2. However, the No. 3 team of junior Donald Hall and junior Dom Miller led their match 6-5 before being forced to stop.

“Mikey got the second set away from his opponent,” Kurtz said. “I like how he did not quit even though it was not his best day.”

Zemaitelis (3-6, 5-7) lost in straight sets at No. 3 after pushing through a pelvis injury that barely allowed him to walk before the game. He wasn’t expected to play, but Kurtz said he was glad that he pushed through the pain.

“Overall, it was a pretty good match, but I know we can for sure play better,” Zemaitelis said. “We are going to keep the same plan and hopefully we can start returning more serves and focus on the deciding points.”

The Hornets will play again against Grand Canyon on Feb. 23 at the Sacramento State Courts.