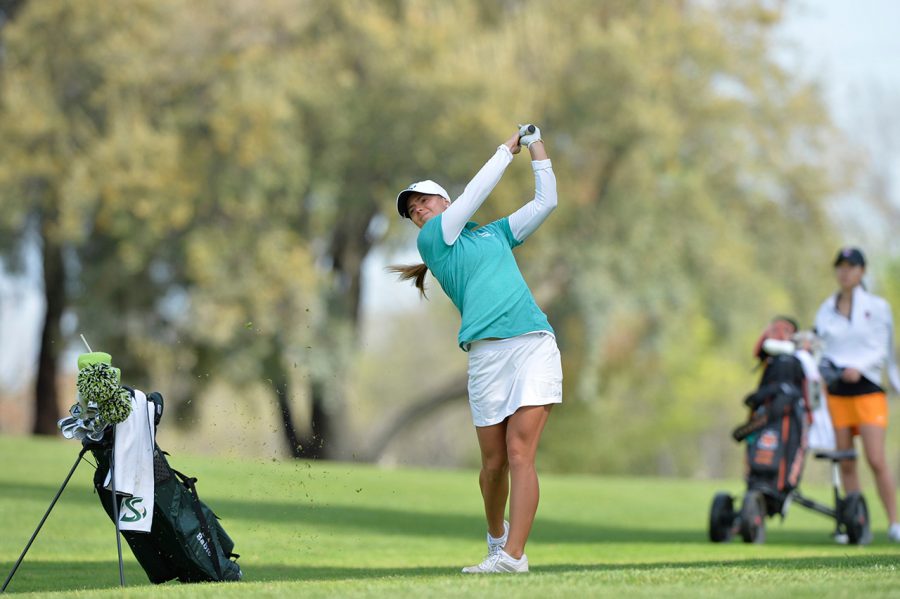 Sacramento State sophomore Sofie Babic averaged the lowest score on the team in the fall season and earned Big Sky Player of the Week honors on Sept. 20.

Although it’s been nearly 3 1/2 months since the Sacramento State women’s golf team played its last round of golf in a competition, the Hornets — which were projected on Jan. 30 to win the Big Sky Conference for a second consecutive season on  — didn’t take much time off.

While sophomore Sofie Babic returned home to Laholm, Sweden once the fall semester ended, she began practicing almost every day so as to not lose any ground. Sisters Astha (senior) and Nishtha (sophomore) Madan returned home to Gurgaon, India with similar eagerness.

The trio, along with junior Julia Becker, have the top-four lowest averages per round in school history and finished in the top three in three of their four events in the fall.

Now they look toward continuing that winning pace.

“We as a team are definitely capable of winning every tournament,” Babic said.

Babic averaged the lowest score on the team in the fall, finished in the top three twice individually and was awarded Big Sky Player of the Week on Sept. 20.

After spending part of her break in Sweden, she went to Spain to practice due to cold, snowy weather in her native country.

The rest of the team has been on the course working since the fall season ended. Winning the Big Sky Tournament is the team’s minimum goal, Babic said.

“If we don’t win conference, I will be entirely disappointed,” Babic said. “I think the whole team would be disappointed as well.”

Babic said she thinks the team can be competitive in the NCAA Regional this season after finishing 15th out of 18 teams a season ago.

Astha Madan agreed. She said that the team has been having qualifying rounds for about a week to set the lineup, and that it is so close that she doesn’t know in what order the starting five will be.

Freshman Corinne Viden has joined the starting lineup and has made strides since the fall, Astha said. Viden averaged 74.92 per round in the fall before ending with two top 10 finishes.

“Corinne has great energy,” Astha said. “She is a long hitter, and she can make her putts.”

After an all-conference freshman season, Nishtha Madan set the all-time school record by shooting a 67 at the Rainbow Wahine Invitational on Oct. 31 and going on to finish third in the tournament. Through 12 rounds, Nishtha has been the only starter to have every round be at least 76 or lower.

According to Astha, everyone on the team just wants to see the other succeed, and it doesn’t matter who has the best score because they all want to win the Big Sky and advance to an NCAA Regional.

“We have the confidence,” Astha said. “All of our goals are in line with one another’s. I think we can go out there and win.”