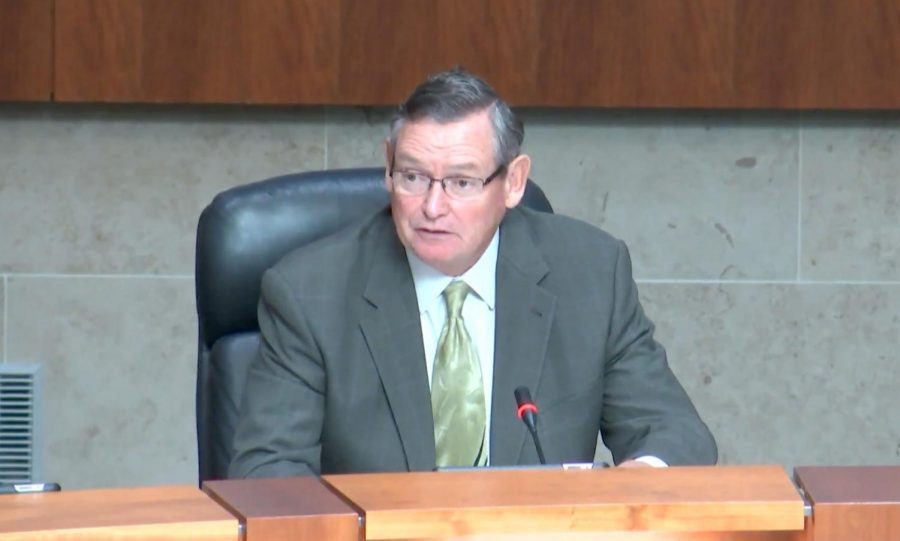 Screenshot via The California State University

California State University Chancellor Timothy White's base salary will increase 2.5 percent to $450,345, according to the CSU’s 2018 executive compensation summary. After the across-the-board raise, the average CSU executive will make $333,447 per year in salary for a total of $9.6 million.

California State University Chancellor Timothy White and 22 out of 23 CSU presidents will be receiving a raise in 2018, according to documents obtained by The State Hornet — even as students face a potential $228 tuition increase.

The CSU Board of Trustees approved a 2.5 percent salary increase for employees across-the-board in a September meeting. According to the CSU’s 2018 executive compensation summary, this will bring White’s base salary to $450,345.

The 30 CSU executives include White, his staff and all the CSU presidents. After the raise, the average CSU executive will make $333,447 per year in salary for a total of $9.6 million.

Salaries are just a chunk of the total compensation for the executives, which includes benefits and other pay, including housing compensation.

The CSU system requested the money for compensation increases, increased enrollment, facilities and infrastructure, mandatory costs and Graduation Initiative 2025, according to Elizabeth Chapin, the manager of CSU public affairs.

Some students have raised concerns about the amount of money that CSU executives are receiving, especially when students are struggling to work and go to school.

Liliya Trepachko, a junior biology major, doesn’t think school executives should be receiving raises because students are suffering as a result of tuition increases.

“I had to scale back on work to focus more on school,” Trepachko said. “Usually I take about 12 units, but now I have to hike up to 15 or 16 to finish faster.”

Chapin, however, defended the amounts of both the raises and total salaries by saying that the executive salaries are a small portion of the overall budget and that being a school president is a lot of work.

“With thousands of students, hundreds of faculty and managing multimillion-dollar budgets, running a university is like running a small city,” Chapin said. “In addition, presidents must be excellent fundraisers, and are also expected to provide for student safety, give direction to a campus, engage the community and be a national voice on issues related to students and higher education.”

Yet the mayor of New York City, the most populous city in the United States, makes $225,000 per year, according to public records.

“Their homes are used for fundraising dinners, charity events and other university-related functions that bring in millions of dollars to the campuses,” Chapin said. “The homes are sometimes used for these types of events more than 100 times a year.”

Twelve of the 23 CSU presidents received at least $50,000 a year in housing compensation last year, while 10 had their housing entirely provided for by the university system.

When White first stepped into the chancellor’s office in 2012, he took a 10 percent cut from the salary he had been approved for by the CSU Board of Trustees, according to Chapin.

When asked if White would take another pay cut in light of the funding gap, Chapin responded that “preoccupation with the compensation of the CSU’s leaders is misplaced.”