REVIEW: The oddity that is Super Mario’s new ‘Odyssey’ 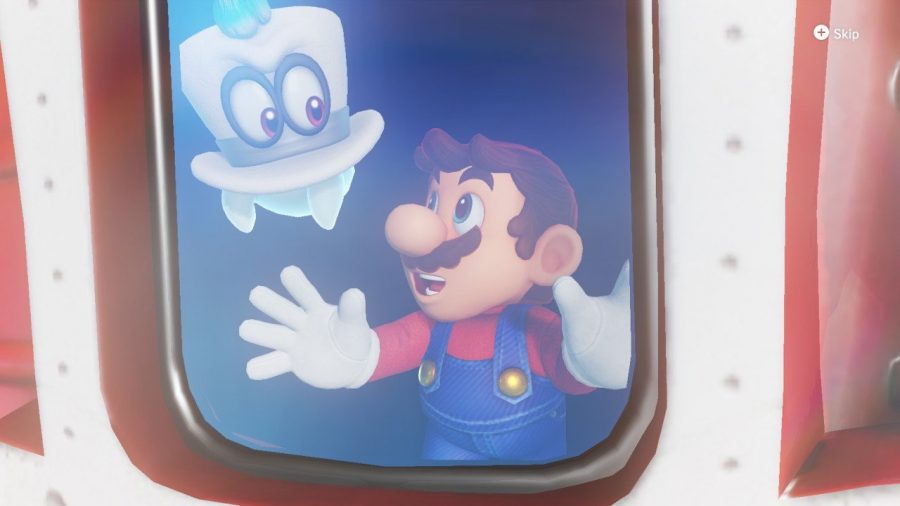 Mario and Cappy sail from kingdom to kingdom in the Odyssey, an airship powered by the nearly 1,000 Power Moons found within the game. You can also decorate the Odyssey with in-game stickers and nick-nacks found at shops scattered throughout the kingdoms.

Mario has starred in many video games since his debut in the 1981 arcade hit, “Donkey Kong,” but it was the release of “Super Mario Bros.” in 1985 that established the Mushroom Kingdom as the mustachioed mascot’s home. In the years following, the red-spotted toadstools, rolling green hills and smiling clouds served as a familiar backdrop for players guiding Mario on his many adventures to rescue Princess Peach from the clutches of the evil Bowser, King of the Koopas.

In Mario’s latest adventure, “Super Mario Odyssey,” Nintendo’s developers pull the overalls-clad hero out of his comfort zone and into the great, big world beyond the Mushroom Kingdom. The creativity on display in these new 3-D environments make “Odyssey” a stand-out experience for Mario fans and one of the most entertaining games this year.

The story once again involves Bowser kidnapping Peach, but this time, he plans to marry her with the help of the Broodals, a crew of maniacal wedding-planning bunnies. The game opens with Bowser booting Mario off his airship after a tough battle. He then lands in the Cap Kingdom where he befriends Cappy, a ghostly character who hides in Mario’s hat and grants him new powers.

(Slide through for screenshots of the game)

Gone are the power-ups of old Mario games, replaced by the “capture” move offered by Mario’s new sidekick. With a toss of his hat, Mario can inhabit a number of different creatures and items, including Goombas, frogs, taxi cabs and even a Tyrannosaurus rex, each with it’s own unique set of abilities that make it more fun to progress through the game’s numerous kingdoms.

The breadth of the game’s levels is one of the highlights of “Odyssey.”  In one kingdom, Mario might be jumping over the deep, water-drenched chasms of a prehistoric mountain top, in another, he might be running his way through the bustling streets of a big city. The developers did a fantastic job of putting Mario into environments not typical to the series, and it’s refreshing to see something besides the all-too-familiar Mushroom Kingdom set pieces. The different kingdoms span across the entire world, and Mario must travel between them in Cappy’s airship, the Odyssey.

The goal in each kingdom is to collect Power Moons, which are used to power the Odyssey as it chases down Bowser’s airship. These moons are everywhere and can be obtained in many ways. Some are in plain sight, others are hidden in secret bonus rooms or locked behind various challenges. Probably the coolest of these challenges are the segments that mimic the original “Super Mario Bros.” game, which have Mario in his classic sprite form running, jumping and breaking bricks along a 2-D plain, just like the old days.

The amount of moons to collect in this game (nearly 1,000) will keep players going for a long time, even after rescuing the princess. This also makes the game’s challenge adaptable, as it’s pretty easy to find the 200 or so moons needed to catch up to Bowser, but it’s a brutal undertaking to nab them all. Depending on how committed some players might be, it’s an achievement that will require a lot of time and patience.

There is little to no fault with “Odyssey,” but the game does suffer from the usual problems that come with 3-D platformers. Miscalculating jumps and falling to your death is a common occurrence, for example, thanks to a misaligned camera view. Players do have full control of the angle, but it can be annoying to have to adjust the camera constantly when you just want to navigate a tough platform section quickly. It’s a minor issue that skilled players are likely used to, but it might be something to consider for players intimidated by 3-D games.

“Super Mario Odyssey” combines the tight Mario gameplay players know and love with new and creative worlds for the portly protagonist to explore. It feels both fresh and familiar, but it’s also delightfully odd in a way that Mario games haven’t been in a long time. It’s definitely worth a look for anyone wanting a fun game that will keep them playing for a while.

“Super Mario Odyssey” is available exclusively on the Nintendo Switch for $59.99.