Potterheads and Trekkies establish their fandoms on campus 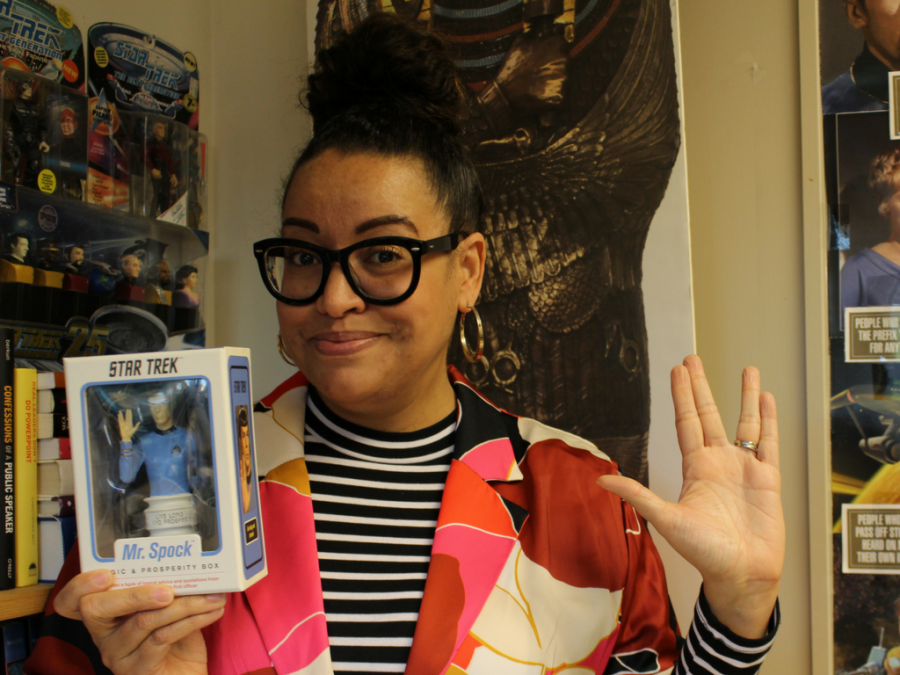 As popular shows gain big followings of college students, fans can be spotted celebrating their fan culture loud and proud at Sacramento State.

Students roam the quad representing their fandom through themed T-shirts, backpacks and other accessories. Heated conversations about the recent “Game of Thrones” episode or the new season of “Stranger Things” can be heard by passersby. Some students have even established clubs for their fandom, including the “Super Smash Bros.” Club, the Anime and Manga Society and the Quidditch Club. It seems like it’s not hard to find someone on campus who is a fan of a particular franchise.

Communication studies and film professor Michele Foss-Snowden is one of the many campus community members who are devoted to fandoms. She has regularly gone to conventions like Comic-Con for over a decade and even wrote her master’s thesis on “Star Trek,” one of her favorite TV shows. She also keeps collectibles from her fandoms, including “Star Trek” Pez dispensers, Pop! Vinyl figures of all the “Stranger Things” characters and various posters.

Foss-Snowden describes a fandom as a community that appreciates and celebrates a particular culture, which can be anything from TV shows or movies to video games. Some of these groups have large followings and have made a name for themselves. Fans of the “Star Trek” fandom, like Foss-Snowden, are called “Trekkies.”

“Star Trek” is more than just a TV show for Foss-Snowden, as it helped her understand her biracial identity. When she was 8 years old, her classmates asked her if she was adopted because she didn’t look like her father. She later confided in her mother who used “Star Trek,” as an analogy to help her understand her situation. Her mother explained why Spock, her favorite character from the show, was also treated different because he had a human mother and a Vulcan father.

“I was like, ‘Well, (Spock) is the only Vulcan, and everybody else around him is human, so they only see what’s different about him, they don’t see what’s the same,’ ” Foss-Snowden said. “I understood from her using that example (that no matter) what my actual combination of race or ethnicity might be on the inside, I’m gonna be perceived by people on what I look on the outside.”

Another fandom with a large following is “Harry Potter,” whose members are called “Potterheads.” Justice Brewer, a junior psychology major, become a diehard “Harry Potter” fan in high school when she started reading the book series. She joined the Quidditch Club upon arriving to Sac State, where she is now captain of the Quidditch team. She can be seen on campus sporting “Harry Potter” themed T-shirts and has also gone to conventions dressed as her favorite characters from the series.

Like any Potterhead, Brewer knows what Hogwarts house she belongs to. Once a student in the series attends Hogwarts School of Witchcraft and Wizardry, they are sorted into one of four houses: Gryffindor, Slytherin, Ravenclaw or Hufflepuff. Each house is known for its different traits and values. Most Potterheads are sorted by taking a quiz on Pottermore, a popular website for fans to learn more about the series.

Brewer was sorted into Slytherin, a house characterized by its proud, ambitious and cunning leaders. Brewer said she doesn’t like how Slytherin is portrayed in the movies because they are looked upon as bad people because of dark wizards like the Malfoys and Lord Voldemort who all happen to be Slytherins. According to Brewer, only a small percentage of characters in Slytherin are actually bad.

“(What) I’ve taken away (from ‘Harry Potter’ is) that there is always more to people then what meets the eye,” Brewer said. “There is so much more to a person then what you see. We see Severus Snape as this cold man who teaches potions, but in reality, he is a man who lost the love of his life and was bullied. He actually has a care in the world. Bad people aren’t always bad.”

The anime fandom has also gained quite a large following here in the states. Even though its origins are in Japan, anime has become popular and has even influenced Western pop culture. Live-action anime adaptations like Netflix’s “Death Note” and conventions like Anime Expo and the more local SacAnime are proof of anime’s influence on western markets.

Kinesiology major Clemente Oropeza is a member of the anime fandom and is also part of the Anime and Manga Society at Sac State. He likes that, despite their over-the-top nature, the characters from his favorite shows are often very relatable. He looks to powered-up characters from the “Dragon Ball” series as inspiration for his training regimen.

“I relate a lot to Vegeta,” Oropeza said. “I’m always training and lifting and trying to improve myself, and Vegeta is a big inspiration for that.”

Vegeta is a character known for his preference to take on stronger opponents and engage in intense, even life-threatening, training regimens, to which he subjects himself, his son and his rival, Goku.

“Dragon Ball” is a “shonen” anime; a genre that typically focuses on action, adventure and is aimed at a young male audience. Some themes seen in shonen anime include self-improvement, discipline and perseverance. Essentially, shonen anime are similar to Western comics like “Spider-Man” and “Batman,” but they tend to emphasize hard work.

Caitlin Morris, a government major, started watching anime when she was just 9 years old. Her favorite genre is fantasy anime like “The Ancient Magus’ Bride.” The story tells the life of Chise Hatori, a young girl who is auctioned off to a mage named Elias Ainsworth. He takes her in as an apprentice and intends to make her his future bride. Morris said that she is drawn to the show because she is a romantic at heart.

Morris participates in cosplay, an activity in which a person dresses up as a character from their fandom. Like many cosplayers, Morris crafts a majority of her outfits and props by hand. For Morris, participating and watching anime helped her break out of her shell, and she became more social. Morris said that pretending to be a character and talking to people about her fandom has helped her open up more in life.

“(Being a part of this fandom) brought out my ability to associate with others,” Morris said. “I was very introverted. This helped me find out who I am.”