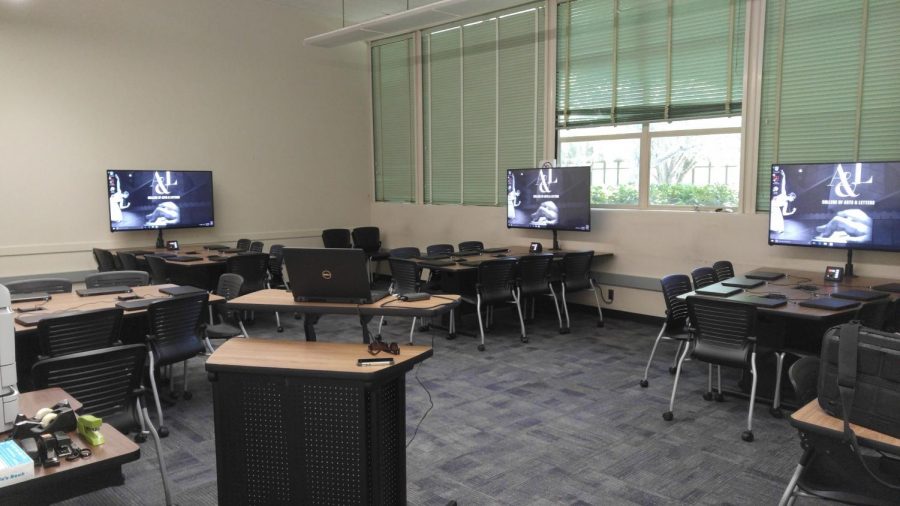 While preparing for class, an English teacher’s assistant and English department coordinator discovered that 35 laptops had been stolen from a recently remodeled laboratory.

The lab, room 131 in Calaveras Hall, was robbed on the morning of Oct. 20, according to the Associate Dean of the College of Arts & Letters Christina Bellon.

Iwasa said police are currently reviewing video from the night the computers were stolen but declined to comment on if any evidence has been found. Iwasa said that the police department is closely monitoring local sale websites in the hopes of finding the suspect or suspects.

“It just sort of happened that someone brought their class in there and said, ‘Where are the computers?’,” English department chair David Toise said. “We had to have our coordinator open the door because most faculty don’t have a key to that room.”

Toise said that the department’s first response was that of confusion, and it was first assumed the laptops had been taken out of the room to be worked on by Information Resources & Technology (IRT).

Toise and the English department called the IRT office who told them that they did not have the laptops. It was then that Toise said he called the campus police.

Bellon said that around 30 classes use the lab on a need-to-use basis and would reserve times, all of which were almost full through the end of the semester, according to Toise.

The lab has been closed until new computers can be purchased. Classes have been moved to Mendocino 2004, according to Toise.

Jeanne Guerin, an English professor, teaches three classes that frequently used the lab space in Calaveras 131. She said that while teaching in the computer lab in Mendocino Hall, she frequently gets interrupted by students opening the door because the room is normally used as an open computer lab.

“It was wonderful teaching in (Calaveras 131),” Guerin said. “The configuration is what I miss the most. The big deal is that we had this wonderful renovation that took so many years to get done. When the students first walked in, they were impressed with the room. It kind of feels like a violation.”

The lab in Calaveras Hall 131 was remodeled this semester to accommodate more students. In prior semesters, the lab seated 28 and was filled with two vertical rows of desks with two computers on each.

“It was a really horrible space,” Bellon said. “This year, we secured funding to refresh computers and redesign the space entirely.”

The lab now houses seven circular tables with five seats at each table.  At each seat was a laptop for students to work with before they were stolen. According to Bellon, the idea behind the new design of the lab was to allow the professor to teach the class and talk to students more efficiently, and where students can be an equal distance from one another.

“It was really nice,” said freshman Kelly Kiernan, who had a class that used the lab space in Calaveras 131. “Each (five-person) table had a monitor, and whatever the professor would do on her computer would show up on our monitor. Being able to go there and do that with the teacher is a big part of the class.”

After the computers were taken, Kiernan said that her class could no longer use the lab. Instead of researching for an assignment as a class, she and her classmates had to do their own research outside of class.

Bellon said she was pleased with how successful the lab space had worked for both students and staff members before the burglary, and she is attempting to get the room back to its original state as quickly as possible.

“It’s not like we have that money lying around,” Bellon said. “We are currently trying to negotiate with Dell to give us a better price on the laptops. It’s looking at least like another two weeks to a month.”