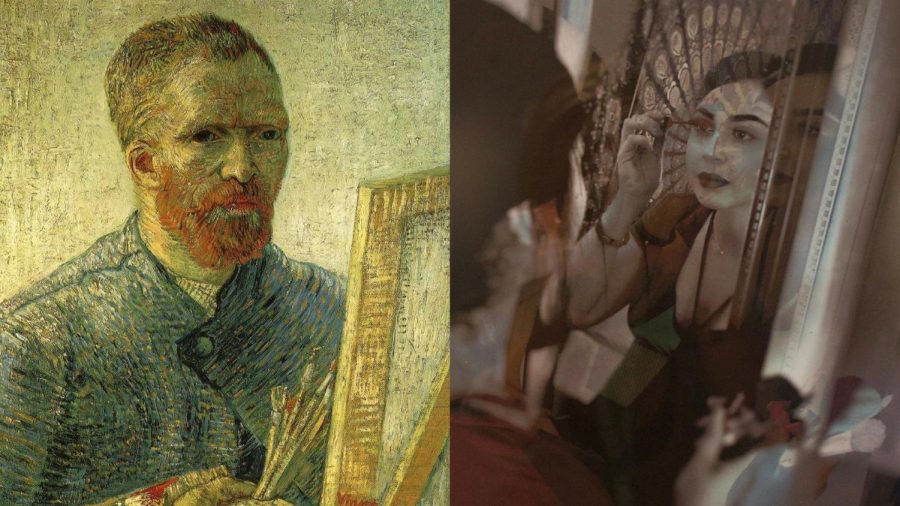 Left, a painting of the original "Self-Portrait as a Painter" by Dutch painter Vincent van Gogh. Right, Stephanie Aguilar-Gutierrez applies a coat of mascara in her self portrait, "A Night Out." The photograph is an appropriation of Vincent van Gogh's self portrait painting.

Sacramento State students find creative ways to express their personal identities through appropriation of historical art pieces in “Appropriation and Identity,” a new exhibit in the Robert Else Gallery.

A grand total of 115 students participated in the project, and only 20 were chosen to have their work displayed in the gallery until Nov. 3. Works of art created by world-renowned artists like Andy Warhol, Frida Kahlo and Vincent van Gogh were reimagined with more modern themes.

One photograph featured in the gallery was created by freshman Stephanie Aguilar-Gutierrez, who appropriated an 1889 self-portrait of Dutch painter van Gogh. She decided to use this painting as inspiration for her photograph, which is meant to convey the purpose of makeup.

“(The photo) was leaning more towards societal views because many people think girls wear makeup just to wear it,” Aguilar-Gutierrez said in an email. “Many don’t know that girls wear makeup to feel good about themselves, to show who they are and express themselves.”

The original painting shows van Gogh in front of a canvas holding assorted paintbrushes and a paint palette. Aguilar-Gutierrez’s version titled “A Night Out” shows herself in front of a mirror applying a coat of mascara to her eyelashes. In her other hand, she holds a set of different makeup brushes, much like van Gogh does in his self portrait.

“Appropriation and Identity” is a class project created by Sac State art professor Joy Bertinuson for her introductory course to art and visual culture. 120 students were enrolled, most of them to meet their general education requirements, making it hard for Bertinuson to come up with an art assignment that all her students can manage.

“(The class is) a GE level course, open to any student, and in fact, most of the students aren’t art majors,” Bertinuson said. “But part of the requirements for this GE course is to actually create art. So, I was trying to find a way to do it because it’s really hard to do an art lesson in a lecture hall.”

See the original artworks that inspired these student artists in the slideshow below.

Since most students are equipped with camera phones, a friend of Bertinuson’s recommended the idea of appropriating paintings with photographs. Bertinuson started the assignment by allowing her students to choose one image from 10 historical pieces of art. They were required to arrange a photograph that presented their own identity, as well as produce similar aesthetic elements as the original work. They were also required to come up with a new title for their appropriated work.

“They (can choose) either to imitate the work or add a new layer of meaning that has to do with their own identity,” Bertinuson said. “Whether that means identifying as a college student, gender identity, ethnicity or any sort of identity.”

Another photograph chosen for the gallery was done by Marley Roush, an undeclared sophomore, who was inspired by Julia Margaret Cameron’s “I Wait.” The original 1872 photograph portrays a young girl with her arms crossed on top of a box that’s draped over with sheets. The girl has angel wings on her back and is posing to have her picture taken.

Roush’s appropriation of the image portrayed her own identity as a college student during finals week. In her photo titled “I Wait for Finals,” Roush sits in the library with her arms crossed on a stack of books. Two open books stand on each side of her face, representing the wings seen in the original photograph. Roush also added a dim, sepia filter as a way of connecting the original photo to her appropriated one.

“I am a college student right now, so I figured I could use the library to kind of show that I am a student waiting for finals,” Roush said. “It was more coming up with the idea that made it hard. I was trying to think of a good background, and while (the professor) was going through (the requirements), I picked the library.”

According to Bertinuson, it is OK to appropriate work from historically well-known artists such as Michelangelo and Leonardo Da Vinci because their work is so recognizable. Furthermore, artistic works become part of the public domain after a certain length of time.

“Anytime an artist appropriates an image for something other than just copying, the goal is to put something of themselves in it, (their) own identity,” Bertinuson said. “Regardless if there’s content outside of the image or within the image, what’s left finally is the decision by the artist that it is in the best state that they wanted.”