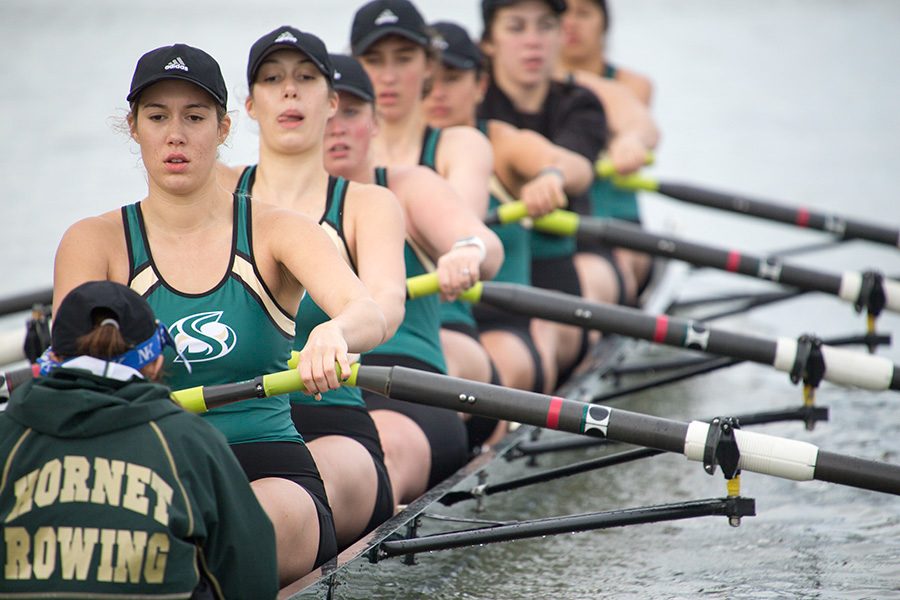 While many Sacramento State students are still in bed at 5 a.m., a group of athletes are on the water preparing for their upcoming spring rowing season.

“Getting there early in the morning gives us full focus, it’s the perfect time, and the water is so still it is like glass,” said Elena Galvez, the senior team captain of Hornets rowing.

Unlike other sports teams, the rowing team practices and competes 30 minutes off campus at Lake Natoma Tuesday through Saturday mornings. This means that commuting and being able to make it to class on time plays a huge factor on the early morning practices.

“For me, it’s practice in the morning, go directly to class, end around 3 p.m., shower and come back to campus and do homework until 9 p.m., then wake up and do the 5 a.m. workout all over again,” Galvez said.

Sac State is hoping this repetition leads to a continuation of its success from last year. Last season, the team finished strong in the program’s third-ever appearance at the American Athletic Conference Rowing Championship.

“Last year, we got third in conference, (and) it was a really tight race, but this year, we have the potential to go head-to-head for first place,” said Stuti Desai, the Hornets senior coxswain.

The Hornets will use the fall semester to prepare for the upcoming season. They use preseason meets, such as the Head of the American at Lake Natoma, to bring together top teams in the West Coast to help them prepare for the spring competitions ahead.

“For Head of the American, we are expecting 600 boats on the water,” Desai said. “We are rowing the same boats twice in one day, which is a first for us.”

Not new to Sac State is Mike Connors who enters into his 16th year as head coach. Connors said his team will try out different strategies at this year’s Head of the American on Saturday.

“A lot of the girls are gonna double up and row two races, (and) that’s a big challenge, but that is what the best teams in the country do,” Connors said. “We want to see how we compare to highly-ranked teams like University of Washington and Cal Berkeley.”

Also to help compete against themselves, the Hornets look at scores from fall preseason to help them work their technique and speed, so they can fine tune small things in the spring.

“We are mainly focusing on lots of endurance, volume and getting strong,” Galvez said. “We are getting synchronized together, so that any person Mike puts together in the lineup can row together well.”

Connors said the goal for his team, from where they left off last season, is to get incoming rowers on the team up to speed for spring competitions.

“We have a smaller team with freshmen and transfers filling big roles,” Connors said. “They have to grow up in a hurry, they’re going to be filling boats at the highest level.”

For seniors like Galvez and Desai, early morning practices offer friendly competition that keeps them energized for the season.

“I like how we all want the best for each other,” Desai said. “Like, if another teammate beats me, I’m like, ‘Good for you, you make me want to push harder.’ ”

“Everybody wants to be in the top boat,” Galvez said. “That’s the boat that goes the fastest and wins gold. That’s what we are here to do: win gold.”

The Head of the American will kick off the Sac State rowing season Saturday at Lake Natoma.