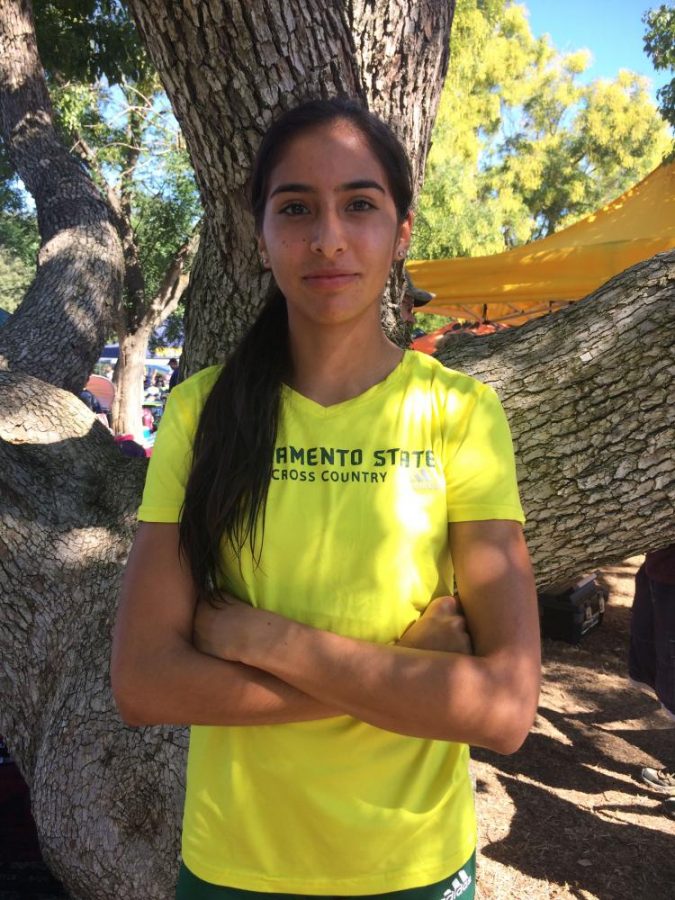 Sacramento State junior cross country runner Amy Quinones has placed first among team members in each race this season and in the top 20 overall at each event.

Last season, Sacramento State junior cross country runner Amy Quinones was one spot and one second away from an all-conference finish in the Big Sky Conference.

Quinones, 19, said this year she’s ready to break into the top-10 spot.

“It’s about how much I will be able to push myself to see how well I can do,” Quinones said, referring to the Big Sky Championships Oct. 28 in Ogden, Utah.

Quinones has become a star runner for the Sac State women’s team, placing first among team members in each race this year and in the top 20 overall at each event, but cross country wasn’t always her passion.

“It started my summer before my freshman year of high school,” Quinones said. “My next-door neighbor was the top runner at my high school, and she had seen me around and said, ‘You should come out for cross country.’ ”

However, Quinones declined since she was a sprinter who enjoyed playing basketball, softball and volleyball.

“I don’t run for a long time, that’s not my thing,” Quinones said. “(My neighbor) said that I should just try it, so I went to the practice, and she was literally pushing me on my back to keep running. I was dying so badly.”

Cross country is also a sport that Quinones said has helped her grow as a person.

“It is so much more than running,” Quinones said. “It builds your confidence, mental strength, which helps me with my life outside of the sport. I like challenging myself, working hard and seeing what I can do next. The fact that I can grow so much as a person every day from learning from my team or my coach.”

As her high school years went by, she was slowly molded into a superb runner with help from her high school coach and her hard-working mentality. This helped her discover her dream of competing at a NCAA division I school, which lead her to Sac State.

In Quinones’ three years at Sac State, she said she has improved her skills as a runner with the help from cross country coach David Monk.

“He is the reason why I am having more confidence in myself,” Quinones said. “He has opened my eyes and told me that I am flirting with being great and that I need to take hold of it and accept it. Obviously that comes with putting in a lot of work, but I can do it, and he always stresses having a relentless pursuit for greatness.”

Monk describes Quinones as a “gritty competitor” with “tons of heart,” but he has the bar set higher for what she can do.

“I believe she should fully be in contention to finish in all-conference this season, but I think she is also a top-five girl in the conference,” Monk said. “I told her last year that she could be one of the first girls in a long time to go to NCAA Championships for cross country before she’s done here. That’s my vision for her and my belief in her.”

Sac State senior cross country captain Gracie Albano said she is excited for what the rest of the season holds for Quinones.

“I definitely expect her to keep going up and performing really well,” Albano said. “She’s blossoming into a great competitor and a force to be reckoned with.”

Quinones continued her uphill season by finishing 11th out of of over 200 runners with a time of 21:22 in the 6K run Sept. 30 at the Capital Cross Challenge. She said she hopes to continue this momentum and project it into all-conference honors and a potential professional career.

“I look up to so many of the professional runners now and seeing their life devoted to running is the dream,” Quinones said. “You’re getting paid to run, that’s the end goal. If the opportunity arises to keep running and getting coached still, I would take it.”

As for now, she thinks of ways to stay motivated.

“Everyday, going to practice I say, ‘What does greatness look like, (and) I am going to chase that.’ ”