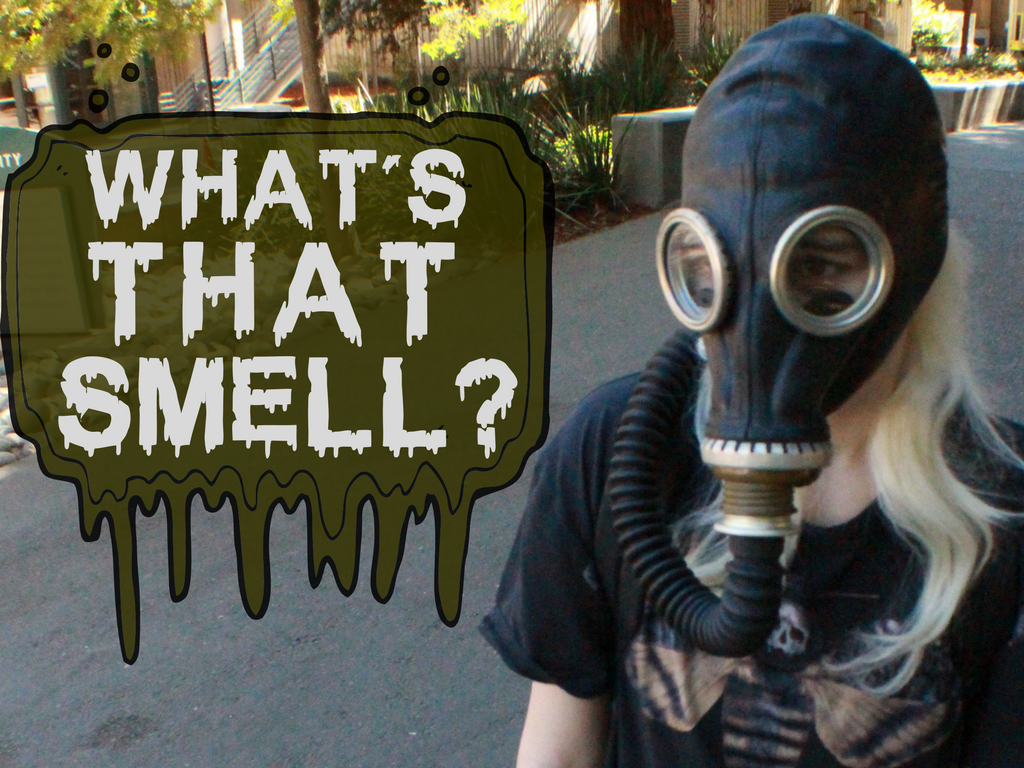 An inordinate amount of calls, emails and internet buzz began since the end of the last spring semester centered around one question: the good ol’ olfactory system, also known as your sense of smell, was picking up some harsh scents all over campus.

So we went looking for the sources of these specific smells, why they’re smelly, and why they’re here.

RELATED: #SacStateStinks: What is the worst thing you’ve smelled on campus?

Is it a sewage line? Is it trash compactors? No! It’s … both?

Exiting the University Union towards the center of campus on a hot day, which might as well come in Costco-sized 200 packs in Sacramento, a stench can be picked up that is quite possibly the single worst smell on campus.

A thread at Reddit.com/r/csus seems to be divided on the source of the smell; a “poorly designed sewer pipe,” or trash compactors that are placed across the walkway from the outdoor patio of Round Table.

Whatever it is, consensus was, it’s getting worse.

User LazyBuhdaBelly commented, “I’ve been at sac state for a long time and for some reason the smell is stronger than usual this semester.”

When asked for clarification on what the source of the smell is, or whether both could be true, multiple sources within Facilities Management at Sac State did not respond as of press time.

For now, the smell remains a gag-inducing mystery, though not as severely putrid as the temperature drops throughout the semester.

“I walk through it five days a week,” Chipak said. “Try not to think about, try not to breathe.”

Chipak is one of the lucky ones on campus. He’s never encountered the Pyrus calleryana.

No, there’s no ancient Greek monster lurking campus. They’re big, beautiful trees that bloom white, five-petaled flowers in the spring, which also happen to smell like chlorine … or, you know, the sex stuff. Depends on who you ask.

Commonly known as the Callery pear tree, this species of tree hails from China and Vietnam and was first brought into America in the early 20th century “for development of fire blight resistance in the common pear,” according to “Plant Invaders of Mid-Atlantic Natural Areas” by the National Park Service.

Now this tree is valued for the ornamental nature of its white petals, and when those white petals bloom in the spring, we politely pretend not to have smelled anything and go share memes on the CSUS Reddit about how it smells like semen.

The only Callery pear trees this author has ever found are next to the walking intersection of Brighton and Humboldt Halls. For now, the trees are a deep red and smell like nothing. Best enjoy them while you can, and steer clear come next March.

Though the worst of the heat is gone for now, the beginning of the semester featured triple-digit temperatures nearly every day, and when combining that with a typical long day, things can get a little stanky.

A post titled “Are CSC majors allergic to bathing or something?” by transfer student RasterDasters explained that multiple times a day, members of their Computer Science classes were distractingly “rank.”

There are options if you fear your smell has become noticeable during the school day. Showers are available at The WELL whether you’d like to work out or not, open from 6 a.m. to midnight Monday through Thursday, and only slightly less long Friday through Sunday.

For those hoping for intervention from a professor, none will likely come.

Matt O’Connor of Student Affairs said in an email that while the university has a policy on disrupting behavior, smell is not included in that, and any faculty member approaching a student about their odor would be doing so in concern for the student’s wellness.

“The question of disruptive ‘odor’ raises complex issues of personal identity and personal choice, so it is difficult to make general statements on policy and best practices,” O’Connor wrote.

If you continue to fear smelling another person’s body odor, csusboy123 on Reddit has a tip.

“I just hold my breath when people walk super close to me… hope I’m not the only one :)”