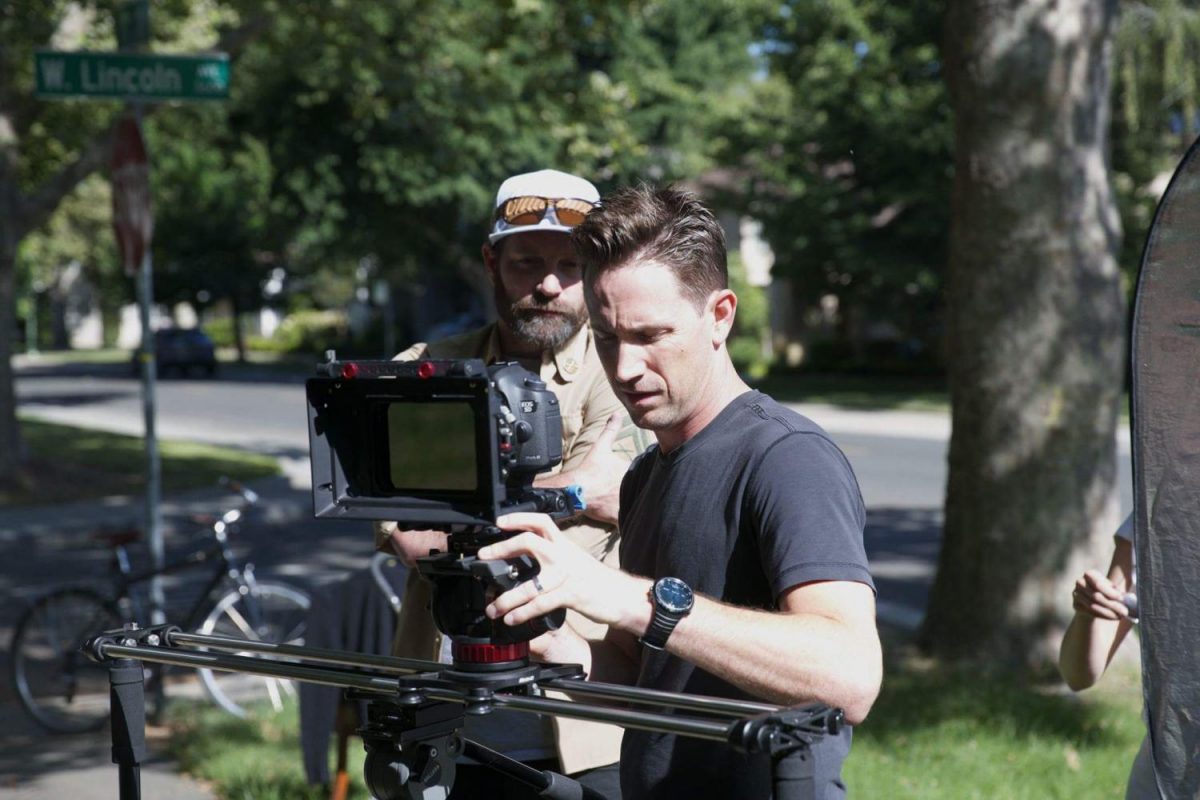 Director Adam Chollet, back, and cinematographer Stephen Chollet, front, shoot a scene for "Postponed." The short film tells the story of a man who wishes to deliver a letter he found in an old military jacket to the writer's lover.

Sacramento State alumnus Adam Chollet had his original script chosen to be in “A Place Called Sacramento” Film Festival, a scriptwriting and short film production for local writers and producers.

Chollet’s script, “Postponed” was chosen out of the 40-70 submissions aiming to be in the top ten finalists and turned into a 10-minute film. PCS invites local scriptwriters to tell stories about life in Sacramento by holding workshops that help applicants with their scripts and filmmaking process.

“Postponed” tells the story of Tyler, a young man living in Sacramento. While on his daily bike ride, Tyler comes across an old military jacket hanging on a real estate sign. Tyler finds a letter in the pocket, and after reading it, comes to the conclusion that the man who owned the jacket died without the chance to deliver the letter to his lover. He feels it is his mission to deliver the letter, addressed to a person named Anne.

“The letter signifies that in life, sometimes, we don’t get a chance to change our mind,” Chollet said. “It brings an idea of closure and love lost. The character felt like words were left unsaid, and that he would help him by delivering the letter.”

Check out the film’s trailer below:

Chollet said he never thought to be a scriptwriter while he was attending Sac State. Instead, he chose to major in business administration. He soon realized after graduating that he liked writing and started working on producing his own scripts.

According to Gary Martin, the director of PCS and Access Sacramento, each film selected needed to be family-friendly so they could be shown to people of all ages on their cable TV channels. Their mission is to allow a film to be shown to everyone, which was one of the reasons why Chollet’s film got chosen.

Martin said the script submissions were reviewed three times by different sets of judges, which included professional filmmakers from the Sacramento area. The judges looked for scripts that were well-presented, met the 10-minute requirement, included no adult content and were personally picked for their target audience.

“Everything is a process,” Martin said. “The beautiful part of PCS is that it celebrates local filmmakers, actors and technical crew. It all gets featured on the big screen and sometimes starts their professional careers.”

Chollet’s work in filmmaking has become somewhat of a family affair. His father helped him with actor auditions for “Postponed,” and his cousin, Stephen Chollet, served as the film’s cinematographer.

“It feels great to see my film come together,” Chollet said. “Film is a very collaborative art form. The actors have their own way of portraying the characters, (and) everything that was shot came pretty darn close to the way I saw it, which was great.”

Verona Mhoon, who portrays the role of Anne, found Chollet’s way of directing different from other directors.

“(Adam is) a very good guy. Unlike most directors, he would tell you what to do, whereas others would tell you to portray the character yourself,” said Mhoon. “He is very calm, self-spoken, has no tension when directing and is a perfectionist. I would love to work with him again.”

Chollet had to cut a lot of scenes from the film in order to meet the 10-minute running time, something he said was hard for him to do because of how good he believed his original script was.

“I had numerous people come up to me and tell me that it should be a feature-length film,” Chollet said. “It was challenging because there was about 14 to 15 minutes of footage that I wanted to keep. The story moves along quickly, but the audience will understand it from beginning, middle and end.”

“Postponed” marks Chollet’s third film to be submitted to the PCS Film Festival and will premiere on Oct. 7 at the Crest Theatre.

For more information, go to accesssacramento.org.